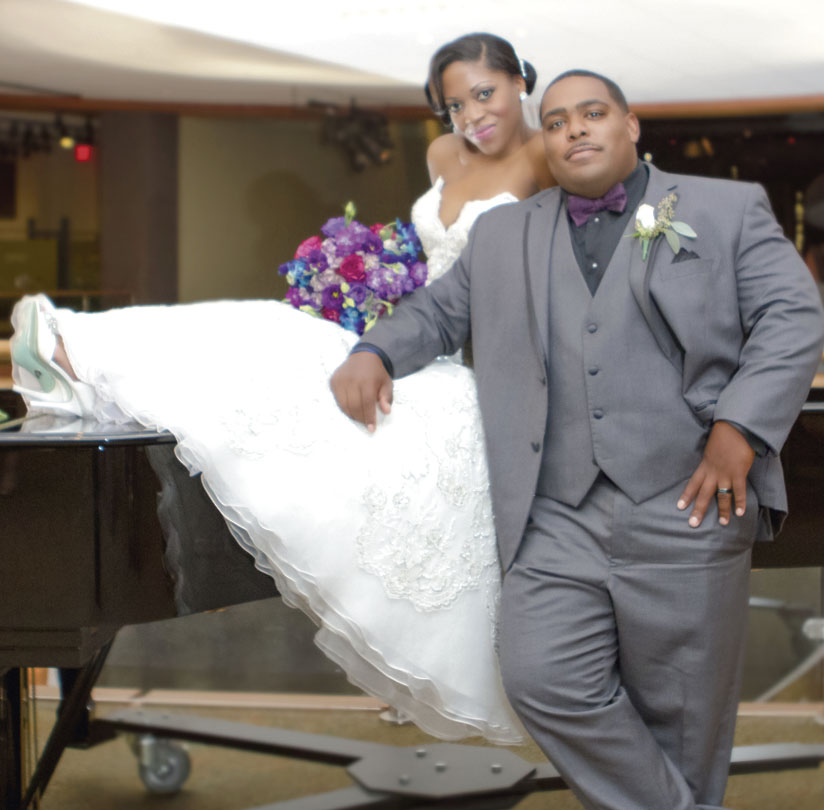 Angela Shanta Josey and Keven Moore were united in marriage at 6 p.m. Oct. 3, 2015, at The National Infantry Museum in Columbus, Ga. The ceremony was officiated by Bishop Arthur Fulton. Music and songs  were provided by the Essence Band, Greg Sloan and Sherida Hambersham. The bride’s parents hosted a seated dinner and reception in the Grand Hall of the National Infantry Museum. On the eve of the wedding, the groom’s parents hosted a rehearsal dinner at the Public Safety Building in Columbus.
The bride is the daughter of Jimmy and Doris Josey of Americus. She is the granddaughter of the late Berthola Harris of Scotland, Ga., and the late Joseph A. Horne of Glenwood, and the late Eddie and Fannie Mae Josey of Americus. The groom is the son of the late Rev. Ronald E. Moore Sr. and Linda Moore of Fort Lauderdale, Fla., the late Floyd and Marie Foster, and the late Lee Andrew and Bertha Moore.
The bride was given in marriage by her parents and escorted by her father. She wore a trumpet-styled mermaid gown by New Natalie’s of Norcross. The beaded lace applique created a focal point for the gown. The sleeveless haltered bodice featured hand-sewn embroidered design and embellished crystals throughout, with an eye catching scalloped flair train and complemented by a fingertip veil. The bride carried a hand-tied fresh cut bouquet of calla lilies, roses, hydrangeas, and ocean breeze orchids
The only sister of the bride, Triola Josey-Gould of Misasaw, Japan, served as matron of honor. Life-long friends and coworkers also made up the wedding party. Yolanda Coley, Americus, served as maid of honor. Kimberly Oliver Petty, Warner Robins; Alicia White Snipes, Atlanta; DeAndrea Glover Davenport, Atlanta; Latresaha Taylor Hunt, Warner Robins; Ashley Miller, Dallas, Texas; Sonja Lewis, Columbus; and Carla Hamilton, Columbus, were bridesmaids. The maid of honor and bridesmaids wore tea-length gowns in teal and plum taffeta from David’s Bridal. Each carried a bouquet of fresh cut calla lilies, roses and hydrangeas flowers. Each bouquet, including the bride’s, were hand -tied with fabric in memory of Johanna White. The flower girls were Addison of Columbus and Makayla of Misawa, Japan.
Several pre-wedding parties were given in honor of the bride and groom. A Meet and Greet was hosted by the parents of the bride at their home. The mother of the bride hosted a Family and Friends Bridal Shower. Theresa White and Alicia Snipes, along with the women of United Holiness Headquarters Church of Americus, hosted a bridal shower. The bridesmaids and hostesses treated the bride to a bachelorette weekend in Atlanta.
Ronald E. Moore Jr. of Fort Lauderdale, Fla., served as best man. Groomsmen included David Westmoreland, Columbus; Lee Sutter, Oklahoma City, Okla.; Tamar McClemore, Oklahoma City, Okla.; Hosea Rodgers, Dallas, Texas; Christopher Josey, Boynton Beach, Fla.; Demetrius Johnson, Columbus.
Following the wedding ceremony the couple honeymooned in Ocho Rios, Jamaica, and now live in Columbus.