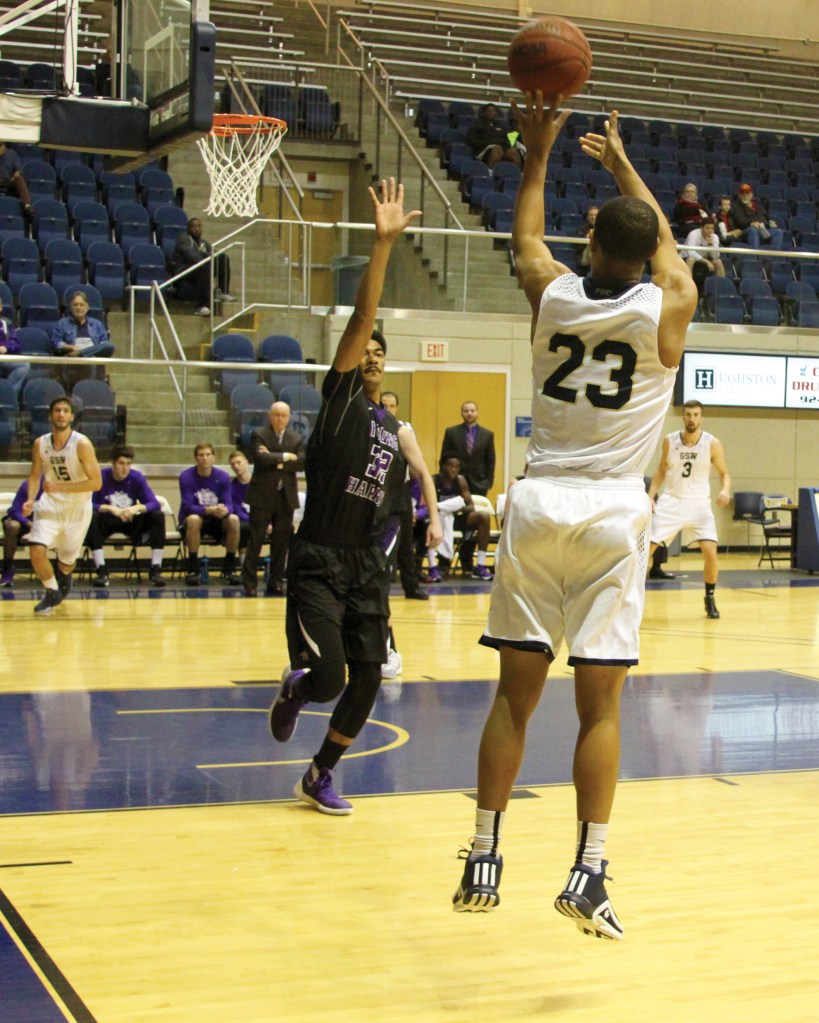 Michael Murray/Americus Times-Recorder: Chandler Thomas takes a shot from the corner during the ‘Canes Jan. 9 match against Young Harris. Thomas tossed in 12 points for the ‘Canes during the contest.

AMERICUS – The Georgia Southwestern men’s basketball team shook off a 14-point first half deficit to grab the lead against Young Harris College (YHC) on Jan. 9 in the Storm Dome, but could not overcome an ensuing nine-point second half setback and suffered an 83-75 loss to the Peach Belt Conference (PBC) West Division leaders.
The Hurricanes missed five of their final six attempts from beyond the arc after pulling within a point, 69-68, with five minutes left to play while Young Harris scored on seven straight possessions to close out the game.
GSW fell to 6-7 overall, 2-4 in the PBC, while Young Harris won its sixth straight game and improved to 8-7, 6-0 in conference play.
In an atypical all-time series, Young Harris takes a 4-3 lead with the road team winning every game.
The Mountain Lions needed most of the first half to build a 14-point lead, but GSW rallied in the final three and a half minutes to cut the deficit to four, 33-29, at the break.
GSW opened the second period on an 11-6 run to grab the lead, 40-39. Chandler Thomas scored on four straight Hurricane possessions to help GSW move ahead 46-43 with 15:19 to play.
Young Harris answered with a 14-2 outburst that proved to be too much to overcome.
While Southwestern finished with six more three-pointers (7-1) than YHC, the Mountain Lions held a substantial edge in free throws (22-4) and controlled the glass as well, out-rebounding GSW, 45-37. The Hurricanes have not won a game this season (0-7) in which they have lost the rebounding battle.
GSW had five players score in double figures. Brandon Price scored 10 of his 12 points, and dished out five of his six assists in the second half to lead GSW. He finished with six rebounds. Jure Gunjina scored 17 points and pulled down seven rebounds. Damien Leonard added 13 points, Thomas chipped in 12 and Adam Thoseby finished with 10.
C.J. Wilson led all scorers with 25 points, despite being held to 0 of 7 shooting from beyond the arc and 8 of 24 overall. Wilson added six rebounds and eight assists. Marcellus Roberts scored 21 points on eight of nine shooting and grabbed nine rebounds. Marques McKoy pulled down a game-high 13 boards.
The Hurricanes traveled to Flagler College on Jan. 12 for an early weekday game with the Saints. The results of this contest were not available at press time.
The ‘Canes return to the Storm Dome on Jan. 16, hosting USC Aiken in another PBC contest.