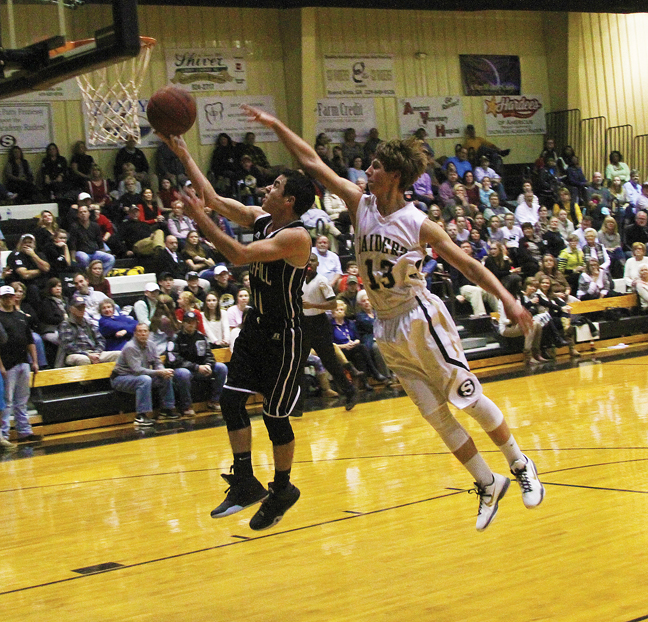 AMERICUS – The Southland Academy Raiders and Lady Raiders returned to GISA 3-IAAA competition on Jan. 12, hosting Terrell Academy in Americus.
After a hard-fought battle, the Lady Raiders fell to the visiting Lady Eagles 37-33 in the afternoon’s opening contest. The Raiders, however, staged a late comeback in the evening’s nightcap to eke out a 45-43 win over the Terrell Academy boys.
With the win, the Raiders remain undefeated in region 3-IAAA after three contests. The team’s overall record is currently holding strong at 9-2.
The Raiders jumped out early after the tip-off, with Jamaal Rice laying up a bucket ten seconds into the action. Terrell immediately responded with a three-pointer and a lay-up to take a 5-2 lead before Southland senior, Landon Henson tossed in another three to even the score.
One minute later, senior Ridge Roland managed a steal and passed to Alex Roach, who drained a three-pointer from the wing to return the lead to Southland.
Terrell responded with a trey of their own to tie the score 8-8 at the 3:30 mark.
Southland junior, Josh McKie, converted a rebound at the 2:00 point to put the Raiders back into the lead, but the Eagles took off on a five-point run over the next minute to take it back. With 10 seconds left in the first frame, Parker Weldon laid up a Rice-assisted bucket to narrow the gap to 13-12 as the game headed into the second stanza.
The teams traded the lead twice over the next five minutes of play thanks, in part, to a steal by Roland after which the Southland guard made a fast break for a lay-up. With 1:30 remaining in the half, Terrell had built a 10-point pad, but a pair of late buckets and a free throw from Rice narrowed the gap to 26-21 by the break.
Southland opened the second half with a four-point burst from Henson and Rice to bring the team within one, but the Eagles had other plans.
Terrell began drawing fouls from the Raiders to build a five-point cushion by the 1:30 mark. Southland’s boys scrambled to make up the difference and, with 25 seconds left in the stanza, Henson brought the Raiders’ efforts to fruition, connecting on a long shot from beyond the arc to tie the score 34-34 with one quarter left in the match.
Over the next seven minutes, the game would see the score tied three more times as both teams ramped up their offense, attempting to gain an edge.
With 45 seconds left to play, Rice picked up a loose ball and made a break for the bucket, putting the Raiders ahead for good. Roland quickly added a Henson-assisted lay-up for good measure before a Terrell shooter responded with a long three-pointer to keep the crowd on the edge of their seats.
With 15 seconds on the clock and both teams in the bonus, Rice drew a foul that would prove to be the last nail in the coffin for Terrell. Rice deftly drained his free throw to cinch the 45-43 for the Raiders after a long, up-and-down battle.
Rice paced the Raiders in their victory with 18 points. Henson followed close behind, tossing in a pair of three-pointers on his way to contributing 12 points for the Southland cause. Roland and Roach added six and five points, respectively.
Rice, Henson, and Roland each contributed a pair of steals to the victory. Rice dished out two assists.
The Raiders and Lady Raiders return to the hardwood on Jan. 15, taking on non-region opponents, the Glenwood Gators and Lady Gators. The results of these contests were not available at press time.
Both teams return to 3-IAAA action on Jan. 19, traveling to Albany to battle Deerfield-Windsor. 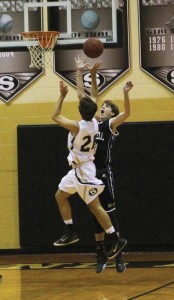 Michael Murray/Americus Times-Recorder:
Southland’s Landon Henson goes after a rebound during the Raiders’ Jan. 12 contest against Terrell Academy in Americus.