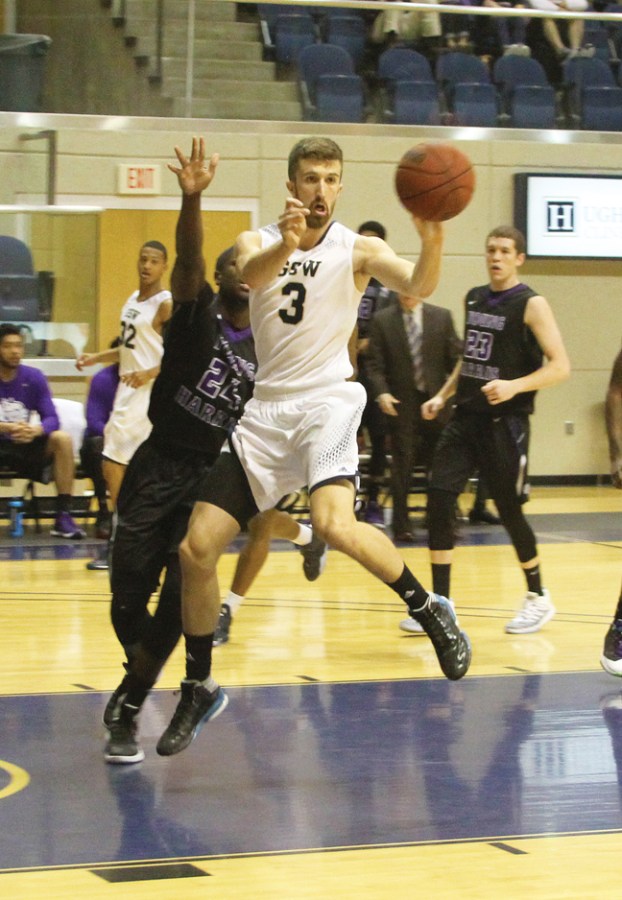 Michael Murray/Americus Times-Recorder: Adam Thoseby makes a pass during the ‘Canes’ Jan. 9 match in Americus. Thoseby tossed in 12 points for the ‘Canes in the Flagler match on Jan. 12.

ST. AUGUSTINE, FL. – Flagler College rallied from a 14-point second half deficit to hand the Georgia Southwestern men’s basketball team a 79-76 loss on the morning of Jan. 12 in Flagler Gymnasium.
The Hurricanes have lost five of their last six games and fall to 6-8 overall, 2-5 in Peach Belt Conference (PBC) play. Flagler, who had lost six of its previous seven games, improved to 6-9, 2-5 in the PBC.
GSW shooters were efficient over the opening 20 minutes, connecting on eight of 16 attempts from long range and 14 of 28 shots overall. That accuracy, however, only helped GSW build a modest lead of six points, 41-35, at the halftime break.
Jure Gunjina and Adam Thoseby combined to outscore Flager 10-2 to open the second half and stretch the margin to 14 points for GSW, 51-37, with 16:18 to play.
Despite a scoring drought of almost three minutes for Southwestern, Gunjina drained a three-pointer with 13:20 left to keep the Hurricanes lead at 14 points, 54-40.
GSW wasn’t as fortunate over the next five minutes as Flagler answered with a 21-7 run in which the Hurricanes were held without a field goal. All seven points came from the free throw line.
The final eight minutes proved to be a back-and-forth affair with five ties and six lead changes.
Gunjina calmly sank a pair of free throws with 22 seconds remaining to put the Hurricanes ahead 76-75, but Ben Bobbitt drove in for the game-winning layup with three ticks left on the clock. Nick Grier added a pair of insurance free throws for the Saints when he was fouled after intercepting GSW’s long throw in after the Bobbitt basket.
Gunjina drained five of nine from three-point range and eight of nine from the free throw line en route to his game-high 25 points. He added six assists. Thoseby dished out four assists and chipped in 12 points. Damien Leonard posted the second double-double of his GSW career with a 16-point, 11-rebound effort. He also added four assists and three steals.
The Hurricanes return home to entertain USC Aiken on Jan. 16 at 7:30 p.m.