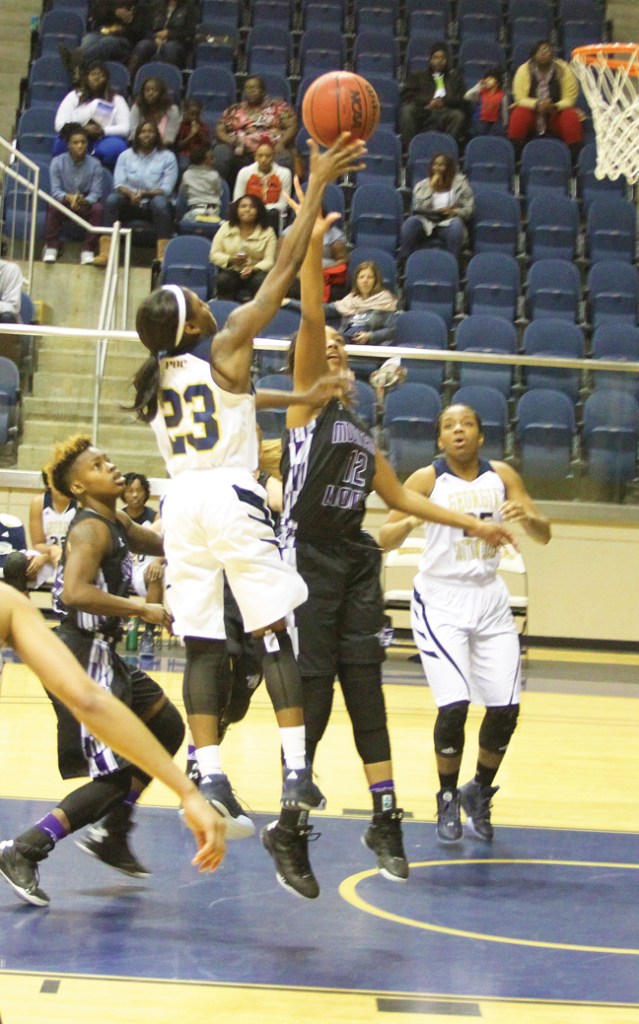 Michael Murray/Americus Times-Recorder: Ja’Quasha Sesler takes a shot from the lane during a Jan. 9 contest in Americus. Sesler opened the scoring for the Lady ‘Canes in the contest at Flagler on Jan. 12, sparking a 7-0 run.

ST. AUGUSTINE FL. – The Georgia Southwestern women’s basketball team fell to 7-8 overall and 1-7 in the Peach Belt Conference after a 59-56 loss to Flagler College (7-7, 3-4 PBC) on Jan. 12 in Flagler Gymnasium.
After Flagler College put in the first basket the Lady ‘Canes went on a 7-0 run sparked a basket by Ja’Quasha Sesler  and followed by a layup from Aleah Holden. A three-pointer from Yvonna Dunkley left the Lady ‘Canes with a 7-2 lead and 7:41 remaining in the first quarter.
Flagler almost caught up with a pair baskets, but Chanice Whitton made sure to keep them out of the lead with two layups and a free throw that gave GSW a six point advantage at the 3:44 mark. With 17 seconds left Va’Queshia Hall made a jump shot to pull ahead 16-9 at the end of the first quarter.
The Saints put in two baskets to start the second quarter and Kris Beckham responded with two free throws, a three-pointer and a layup to give GSW a 10-point pad with 5:17 left.
The Lady ‘Canes clung onto an 11-point lead with 3:49 remaining, but Flagler managed to catch up and went into half time down by two points, at 26-24.
The Saints tied the game after two free throws to start the third quarter and took the lead at the 7:14 mark. Whitton tied it right back up with a lay-up and quickly retook the lead back with another lay-up and a free throw.
Flager put in a basket to trail by one and the Lady ‘Canes went on another point bender sparked by a basket from Whitton and followed by jump shots from Emili Russ and Jasmine McSwain to lead 39-32 with 2:42 left in the third.
Flagler came back strong to knock a dent in GSW’s lead and close the gap to two points heading into the final quarter.
The Saints opened the final frame with a free throw and a three-pointer before Dunkley tied the score with a lay-up. The game was tied two more times in the fourth before Flagler took and kept the lead to win the game 59-56.
Whitton led the Lady ‘Canes with a season-high 14 points and had four rebounds in 17 minutes of action. Beckham made both of her shots and sank all four attempts from the charity stripe  en route to her nine points. Holden led GSW in rebounds with six in only 17 minutes.
The Lady ‘Canes return to the Storm Dome on Jan. 16 to host USC Aiken at 5:30 p.m. in Americus.