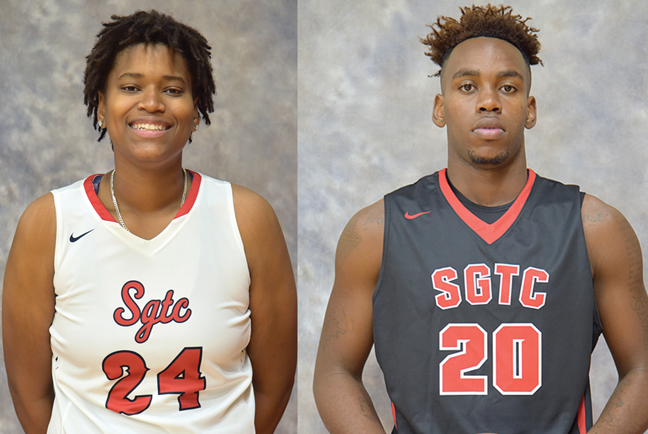 Submitted by South Georgia Technical College: Angela Tompkins (left) and Demario Beck were each recently named GCAA Players of the Week for their performances on the court with the Jets and the Lady Jets.

SGTC Lady Jets sophomore, Angela Tompkins, a 6’ 1” shooting forward from Punta Gorda, FL., was recently selected as the Georgia Collegiate Athletic Association (GCAA) Division I Women’s Basketball Player of the Week for two consecutive weeks. This was Tompkins’ third GCAA Player of the Week selection and the fourth time that a Lady Jet has been selected this year.
Tompkins has earned three double doubles and averaged 19.8 points and 10.5 rebounds in four consecutive games for the Lady Jets. The Lady Jets swept three games in the SGTC Classic but then dropped a tough loss to the NJCAA nationally ranked Shelton State Lady Bucs to wrap up 2015 competition.
Tompkins is averaging 18.2 points per game so far this season, which is the fifth highest in the conference. She is also third in the conference in overall scoring with a total of 364 points. She is second in the conference in field goal percentage shooting with a 60.9 average, is shooting 46.2 percent from the three point line and shooting 71.8 percent from the charity stripe. She is also averaging 10.3 rebounds per game as well as 2.1 assists and 1.1 blocks.
The Lady Jets are currently ranked first in the GCAA with a 7-1 record and are 17-4 overall. They are hoping to earn their third consecutive trip to the NJCAA National Tournament this spring and their fourth overall trip to a national tournament.
Tompkins is currently enrolled in the Recreation and Leisure Management program at SGTC.
The Jets recently saw a team member honored as player of the week by the GCAA as well.
Demario Beck, a 6’ 8” sophomore forward from Cochran, was selected as the GCAA Division I Men’s Player of the Week after he contributed 21 points, 12 rebounds, one assist, and two blocks to the Jets’ win over Chipola.
Beck has started 20 of the 21 games for the Jets this season and is averaging 11.1 points per game. He is shooting 47.5 percent from the field, 26 percent from the three-point line and is hitting 73.4 percent of his free throws. Beck currently leads the conference in blocks with 41 total. He is ranked third in the conference on the boards with 206 total rebounds on the season.
The Jets and Lady Jets return to action on Jan. 17, traveling to Albany to take on Albany Tech. The teams will return to their home court at the Hangar in Americus on Jan. 23 to battle Central Georgia Tech.