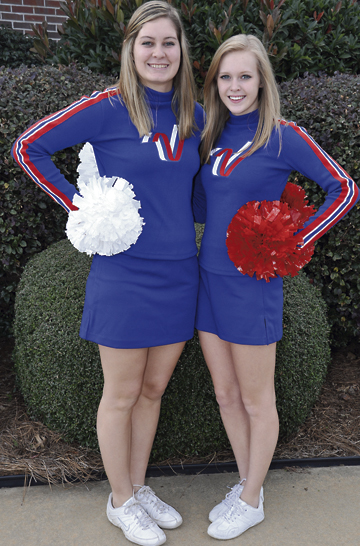 AMERICUS — Southland Academy had two senior cheerleaders represent the school and Varsity Spirit in the 2016 London New Year’s Day Parade.
Emily Brown, daughter of Steve and Barbara Brown of Americus, and Jordan Sanders, daughter of Chad and Kim Norton and Phil Sanders, all of Americus, traveled to London along with approximately 650 high school cheerleaders from across the United States. They both were invited to perform in the parade after being selected as an All-American at one of the summer camps hosted by Universal Cheerleaders Association. All-Americans are selected to try out based on superior cheerleading, dancing, and leadership skills at camps across the country.
Southland Academy had four seniors win this top honor: Emily Brown, Olivia Payne, Jordan Sanders and Mary Margaret Turton. Only the top 12 percent of the more than 325,000 cheerleaders who attend the 5,000 Varsity summer camp sessions earn the chance to march in the holiday spectacular.
Brown and Sanders were among parade performers from all over the world. Cheerleaders, marching bands, acrobats, and more  made up the 8,500 performers representing 20 countries worldwide in the 2016 parade. Established as one of London’s biggest events, the parade is seen by nearly 600 million people around the world.
In addition to cheering in the parade, All-Americans were able to celebrate the holiday’s European style with the chance to tour some of London’s most historic sites during their seven-day stay.
This is the 29th year that Varsity Spirit has coordinated this event.

JACKSONVILLE, Fla. — The Tim Tebow Foundation announced that 200 churches, in 48 states and eight countries have signed up... read more