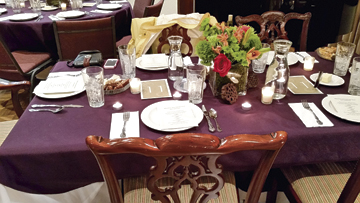 One of the well-appointed tables at the 2016 Boar’s Head Feast, an annual tradition at Calvary Episcopal Church in Americus.

Legend has it (from Queens College, Oxford, England) that several hundred years ago, a young scholar was traveling through the woods on his way to midnight mass, and reading Aristotle from his metal-bound book of philosophy. Suddenly, he was confronted by a wild boar. Having no weapon with which to defend himself, the scholar rammed the philosophy book into the boar’s mouth, choking him. Late that night, he and his  friends roasted the animal and feasted upon it, after parading the head around the room in ceremony.
When the Men’s Club of Calvary Episcopal Church in Americus presented the Annual Boar’s Head Feast last Saturday, I do not think they had been reading Aristotle. But they certainly knew how to roast a pig — and turkey, and beef, and ribs and wild game, even offering bison meat balls as an appetizer. The annual affair has become a tradition at Calvary, when folks from throughout the Americus community gather to celebrate the feast and enjoy the elegant surroundings that have been prepared by Calvary members in preparation for the event. The parish hall was dressed in its finest fare, with flowers and candles lending an atmosphere of celebration and beauty. New purple tablecloths donated by Cindy Dudley were in lovely contrast to the flowers that she and Jerry Crisp had gathered for each table — greens and pinks and reds, surrounded by moss in square class containers. It was a lovely sight.
No one would ever accuse Billy Steve Satterfield of reading Aristotle, but when he returned to Macon to help his friends at Calvary prepare for the annual event, and paraded the boar’s head throughout the gala crowd, one could be forgiven for thinking they were back in the 14th century — if only for a moment. Applause and toasts were in order, and all the men of Calvary, led by Ashley Goodin, were thanked for the huge effort that the final result represented. (They start cooking on Friday, and cook some items through the night. They are a rather exhausted group by the time the curtain rises on their big night.)
Accompanying items included rice, collards, a delectable green salad, Mike Saliba’s traditional ambrosia, and a delightful assortment of perfect-sized pieces of cheese cakes. One of the joys of the Feast is tradition: the ambrosia, the collards, the salad, will always be on the menu. And while diners are feasting on the sumptuous food offerings, David Becton,  Ralph Cornwell, and their band of merry musicians will be there once again to entertain throughout the evening.
Many fine recipes will be offered as they are gathered in, but today we’re featuring the Smothered Quail, prepared by Carey Wooten. It comes from a recipe her father clipped from the Macon Telegraph some 40 years ago; she perfected it, and it appears in Calvary’s classic cookbook, “Food and Faith.” It is not hard; and it is a delicious way to prepare quail.

SMOTHERED QUAIL
1 stick butter
8 quail, cleaned, breasts and legs separated
1 cup sherry
1 can cream of mushroom soup
1 can chick broth
Salt and pepper to taste
Preheat oven to 350 degrees F. Melt butter in skillet over medium heat. Brown quail breasts and legs and place in Dutch oven. After all birds are browned, add other ingredients to remaining butter. Cook until thoroughly mixed, adding flour to thicken, if necessary. Pour gravy over quail. Bake 1 hour. Serve with grits or rice and biscuits. (There is nothing better than a hot biscuit covered in quail gravy!)

Joni Woolf, a writer and editor, now lives in Schley County, having moved from her home in Macon several years ago. Contact her at indigojoni@windstream.net 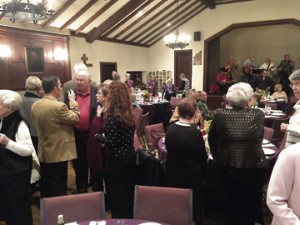