Lady Jets remain on top in GCAA, Jets drop to no. 7 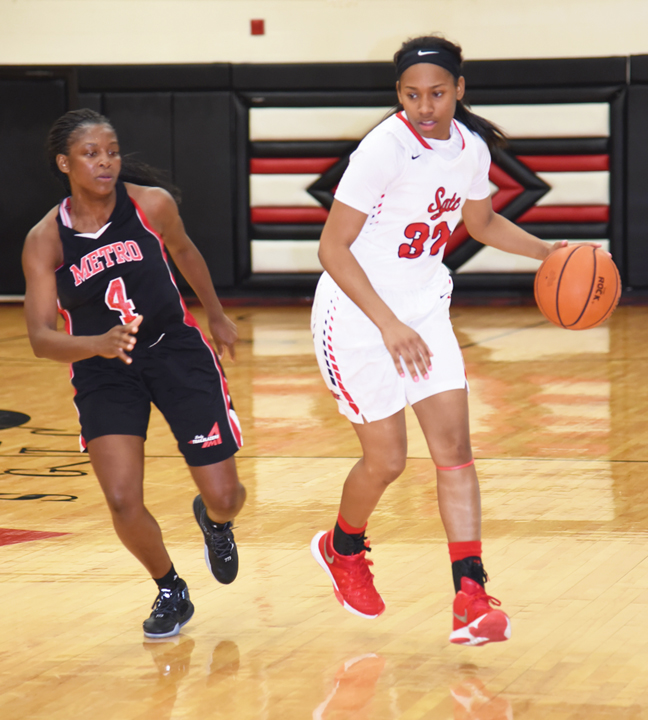 AMERICUS – The South Georgia Technical College (SGTC) Lady Jets scored first and often to capture a 76-44 Georgia Collegiate Athletic Association (GCAA) Division I basketball win on Jan. 13 to remain in first place in the GCAA standings.
The Jets lost their fifth straight game after a three point shot at the buzzer barely missed and allowed the Atlanta Metro Trailblazers to take the 71–68 conference victory.
The Lady Jets are now 18–4 overall and 8–1 in the conference. The SGTC ladies’ conference record puts them in first place ahead of Georgia Highlands College (7–1) and Darton College (5–3).
The Jets are currently 12–10 overall and ranked seventh in the conference with a 3-5 record.  Atlanta Metro is ranked fourth.
“Atlanta Metro had been playing really well coming into tonight’s game so we were aware that we had to bring our A-game to beat them,” said SGTC Athletic Director and Lady Jets head basketball coach James Frey. “I didn’t feel like we had a good game offensively, but we definitely defended and rebounded at a very high level.”
“When we get locked in defensively, we can be tough to beat. Atlanta Metro has one of the best players in the conference in Ta’Asia Wright and I thought we did a good job keeping her off the boards. It was also good to be able to get all 10 ladies extensive playing time,” said Coach Frey, who added, “I hope that will really benefit us at the end of the season.”
Sophomore guard, Cierra Bond, was the leading scorer for the Lady Jets with 22 points. Bond was followed by sophomore, Angela Tompkins, with 16 points. Claudia Perez, another sophomore forward, added 10 points to close out the double-digit scoring. Tompkins also had 14 rebounds, two assists, one steal, and one blocked shot. Bond had seven rebounds, three assists and two steals.
Molly Brown, Mikaela Jones, and La’Deja James each tossed in six points. Brook Burns and Kendra Green both added four points while Kayla Mallett tossed in two. Guard, Brittney Delva, was the leader in assists with five for the lady Jets. She also had two rebounds and four steals.
Ta’Asia Wright was the leading scorer for the Atlanta Metro Lady Trailblazers with 13 points. She was the only member of her team to reach double-figures.
After that 32-point victory by the Lady Jets, the Jets got off to a slow start in the second game of the double-header. They were down 37–31 at the end of the first half and then came back in the second half, tying the game and actually pulling ahead 56–55 in the final six minutes.
Atlanta Metro would not relent, however, and regained a five point lead with 1:45 remaining in the game. SGTC proceeded to narrow that gap to 66–63 with 32.6 seconds left.
Both teams scored again and, with 8.4 points remaining on the clock, the Jets were trailing 70–68. The Jets fouled and Atlanta Metro pulled ahead 71-68 with less than a second left. SCGTC fought until the last second, firing off a three-point shot that hit the rim and bounced out in an attempt to tie the game and force an overtime period. The home team’s efforts fell short and the Jets were sentenced to the 71-68 defeat at the final buzzer.
“We came out with zero energy for the first thirty minutes of the game,” said Jets head coach, Travis Garrett. “Then we showed flashes of playing the game the right way, then we got beat on back door cuts and we put them on the foul line. We just didn’t get the job done.”
Atlanta Metro out-rebounded SGTC and had a higher shooting percentage everywhere except at the free throw line.
Only two Jets scored in double-figures in the contest. Sophomore, Corbyn Jackson, led the Jets with 16 points. Jackson connected on eight of eight attempts from the foul line and four of ten from the field. He also had seven rebounds.
Clarence Smith was the other Jet in double figures with 13 points. Smith hit two three-pointers and shot seven of eight from the foul line.
Rico Simmons added eight points. Carlos Eason tossed in seven, and Keyshawn Baker scored six points. Shaq Athie and Isaiah Channer had four points each. Jalen Mitchell and Demario Beck scored three points apiece while Matt McMorris and Pat Welch each contributed two. Beck brought down seven rebounds as well.
Three Atlanta Metro players hit double-figures in the match. Brice Booker led with 22 points while Christopher Jones and Carnilious Simmons had 15 each.
Both the Jets and the Lady Jets traveled to Albany on Sunday to face Albany Tech in conference games at Albany State’s gym.
The Jets fought to an 84-65 victory over the Albany Tech Titans while the Lady Jets bested their conference opponents 68-42.
The Jets and Lady Jets continue conference competition on Jan. 23, hosting Central Georgia Tech.
The two teams then take to the road for a match-up with East Georgia in Swainsboro on Jan. 27 and then to Rome on Jan. 30 to face Georgia Highlands. 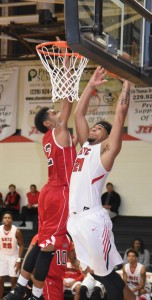 Photo by Su Ann Bird:
Corbyn Jackson (21) led the Jets in scoring in the narrow loss to Atlanta Tech with 16 points on Jan. 13.