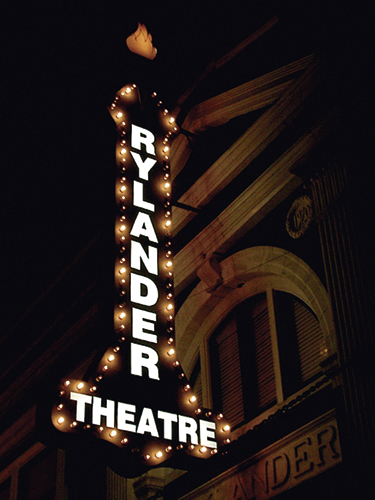 The historic Rylander Theatre, in downtown Americus, with its marquee alight.

AMERICUS — The historic Rylander Theatre celebrates its 95th anniversary this week and though no formal celebration is planned, the occasion is a significant milestone in the theater’s long history of providing varied entertainment in genres ranging from vaudeville acts to movies and live stage productions.
“It is truly an honor to serve as steward for this beautiful theater,” says Heather Stanley, managing director. “It’s a great responsibility, but I wouldn’t trade it for a brand new state-of-the-art performance venue for anything in the world. This place has so much history and ambiance. I’m excited to be here for the 95th birthday.”
The grand opening of the Rylander Theatre was a momentous occasion for the Americus community and beyond when the doors swung open for the inaugural event in 1921; John Golden’s touring production of “Lightnin’” that played to a full house. The next month, on Feb. 14, the advent of silent motion pictures premiered with Mary Pickford starring in “The Love Light” and Harrold Lloyd in “Get Out and Get Under.”
Built by the late Walter Rylander Sr. and his brother Arthur Rylander at the cost of $150,000, the Rylander Theatre was originally a vaudeville theater followed by silent films and “talkies,” enjoyed by generations of citizens before it closed in 1951. The theater sat dormant and in disrepair for almost 50 years but has come full circle and is once again the cultural center of downtown Americus.
After a $3.5 million restoration effort by a public/private partnership, the theater was returned to its original splendor and reopened Oct. 1, 1999, with the gala celebration of President Jimmy Carter’s 75th birthday.
It’s likely no one is alive today that was at the Rylander for its 1921 inaugural event. But there are many individuals in the community who have fond memories of the theater  and continue to be patrons.
Among them is Americus native Mike Saliba, 85, who says he practically “lived” at the Rylander during the late 1930s and ‘40s. His brother, George Saliba, 14 years his senior, owned and operated George’s Soda Shop, a vibrant and busy gathering place just off the main lobby named in memory of the late owner, and serves today as a concession venue during events only.
Saliba recalls he was about five or six years old when he began going to the movies at the Rylander.
“On Saturdays, all the children in town went to the movies at the Rylander and stayed all day,” says Saliba. “Tickets were 10 cents each and we fought over the seats on the first few rows. If I got hungry I went across the street where my daddy, Michael Saliba Sr., had a restaurant or to George’s to get something to eat quickly and return to the show. The movies changed frequently so I was at the Rylander often.”
Saliba remembers sitting on the steps leading to the stage when the now classic film, “Gone With the Wind,” was shown in 1939, because every seat in the house was already taken.
“It was a four-hour movie and my mother worried I would get hungry so she brought me a couple of hot dogs,” says Saliba, laughing.
He further recalls when “The Wizard of Oz” was shown on the big screen, a Leslie woman, who was cast in the film as one the “little people” made a personal appearance on stage. Another memory is from junior high when he  developed an interest in music and playing the cornet. His music teacher, Ella P. Maynard, ordered a cornet for him and when it arrived, he went to her home on South Lee Street to pick it up.
“When I opened the case and saw the golden cornet in the purple velvet lined case, I thought it was the most beautiful instrument I had ever seen,” he recalled.
He then made his musical debut on the Rylander stage, playing that golden cornet to the music of “Paper Doll.”
Stanley says the theater is not used purely for entertainment but it is an economic driver for the community and a tourist destination at both regional and state levels.
“But more than that, it hy. “At 95 years old, the building itself is in need of repairs, but the programming on stage is still as strong as ever.”
The Friends of the Rylander, an organization supporting the artistic, educational and preservation efforts of the Rylanderolds a special place in the hearts of so many in this community,” says Stanle, present fo 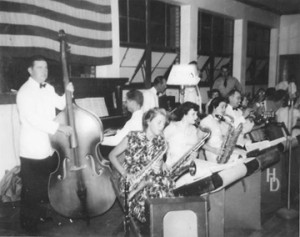 Ira T. Jones playing bass fiddle was the sign man for the Rylander. This is Hank Dudley’s band playing at the American Legion in the old Citizens Bank building. Faye Lunsford (Saliba) is playing tenor sax on the end. Hank is playing trumpet.

ur professional stage productions annually. The upcoming show is the winter gala, “The McCartney Years,” a concert featuring music of the Beatles, at 8 p.m. Saturday, Feb. 27. The final production is “The Elton John Tribute” at 8 p.m. April 2.
Those who would like to support the Rylander can join the Friends of the Rylander with a tax-deductible gift. You can join or renew your membership on line at www.rylander.org or send your donation to Friends of the Rylander, P.O. Box 864, Americus GA 31709.
The theater is also the home of Sumter Players Inc., a community theater, which offers a separate theatrical season.