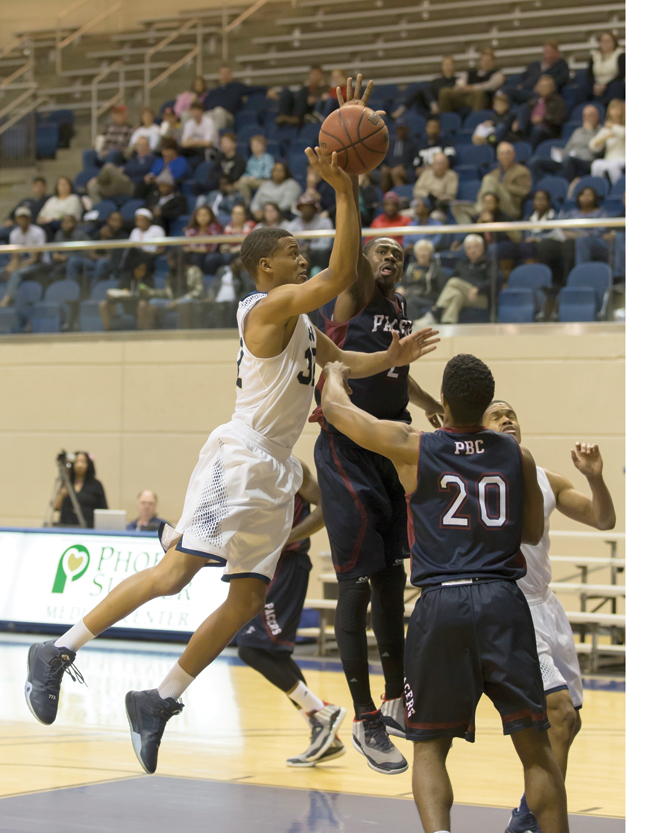 Photo by Chris Fenn: Damien Leonard takes a long shot from the lane during the ‘Canes’ Jan. 16 contest in Americus. Leonard led GSW to victory over USC Aiken with 19 points.

AMERICUS – Senior guard, Damien Leonard, drained five of eight from beyond the arc to lead Georgia Southwestern past USC Aiken (USCA), 67-62, on Jan. 15 in the Storm Dome. Leonard finished with a team-best 19 points and four steals.
GSW improved its record to 7-8 overall and 3-5 in the Peach Belt Conference while USC Aiken fell to 3-12, 0-7 in the PBC. With the win, the Hurricanes snapped an 11-game losing streak to USC Aiken during which the Pacers have historically won by an average of 13 points.
The Hurricanes fell behind early in the contest, as USCA led 10-2 after five minutes of action.
GSW answered with a 12-4 run to tie the game and Jure Gunjina followed with a lay-up to give the Hurricanes their first lead of the evening, 16-14, with 9:44 remaining before half-time.
Back-to-back three-pointers from Leonard and Terence Johnson in the final 90 seconds of the half stretched the Hurricanes’ lead to seven points, their largest of the opening 20 minutes.
GSW led 30-25 at the break and worked its lead to a dozen points, 48-36, by the 10-minute mark of the second half.
A converted three-point play by Devin Watson with 8:02 to go put the Hurricanes up by 15 for their largest lead of the game.
Leonard drained another three-pointer with 4:26 on the clock to keep GSW ahead by 13 points, but USCA refused to wave the white flag. The Pacers answered with a 12-1 run to pull within a basket with 52 seconds remaining.
Gunjina converted a key three-point play down the stretch and Leonard calmly sank two free throws in the final seconds to seal the victory.
The Hurricanes out-rebounded USCA, 37-30, and remained undefeated this season (7-0) in matches where they win the battle on the glass.
Gunjina connected on five of eight shots and six of seven attempts from the free throw line to finish with 17 points. Adam Thoseby added 11 points and a game-high nine rebounds.
The Hurricanes traveled to Savannah on Jan. 18 to face Armstrong. The ‘Canes suffered a 106-100 triple-overtime defeat in the road match.
The ‘Canes return to action on Jan. 23, hitting the road to battle UNC Pembroke.