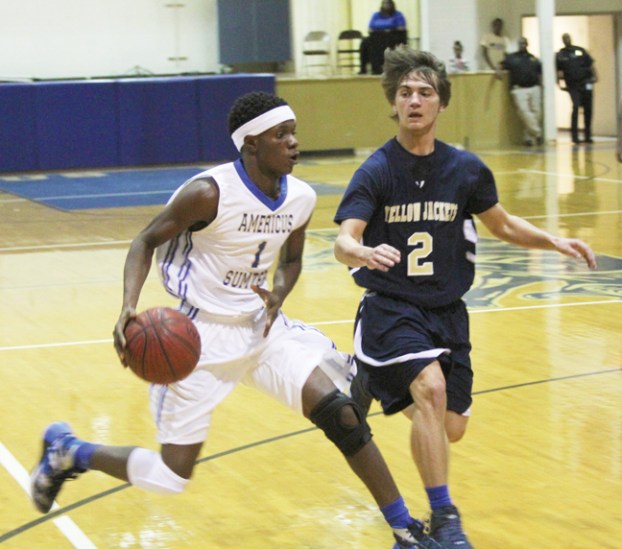 Michael Murray/Americus Times-Recorder: ASHS’’ Daylon Leary pushes past a Thomas County defender during a Jan. 16 contest in Americus. Leary dished out four assists for the Panthers in the Copeland Classic.

MACON – The Americus-Sumter High School (ASHS) Panthers and Lady Panthers took a short break from conference play on Jan. 18 to travel to Northeast High School in Macon and participate in that school’s annual Copeland Hardwood Classic basketball tournament.
Both of the ASHS teams toppled their non-region opponents in their respective matches, tacking another win onto their season records. The Panthers and Lady Panthers currently enjoy a seven-game winning streak with neither team having fallen in a contest since the turn of the new year.
The Lady Panthers opened the action, battling the Class AA Thomasville Lady Bulldogs. Thomasville entered the contest with a 10-8 record before the Lady Panthers deftly added another unsightly mark to the team’s loss category.
The ASHS girls fought their way to a 64-47 win in their sole match of the tournament.
Later that evening, the Panthers hit the hardwood to take on tournament hosts, the Class AA Northeast High School Raiders.
The Panthers jumped out early in the contest, earning a 17-point lead in the first frame after giving up only one basket over the initial eight minutes.
With the score at 19-2 heading into the second stanza, the Panthers eased up on their tight defenses, allowing their hosts to toss 16 more points onto the board. The ASHS boys tacked on another 19 points before the half-time break.
The Panthers expanded the gap by nine more points after returning from the break, outscoring the Raiders 24-15. Northeast High had their most productive frame of the contest in the fourth period, tacking 27 points onto the team’s final tally. Their efforts proved to be too late to overcome the early gap, however, and the Raiders were eventually sentenced to a loss.
The Panthers added another 17 to their total over the concluding eight minutes, earning the comfortable 79-60 victory.
Kiante Sims led the Panthers to victory in the contest, contributing 14 points and five rebounds to the win. Aiden Sanford followed close behind with 13 points and three steals. Shqual White was the third Panther to score double-digits, tossing in 10 points. Jerrell Jones brought down five rebounds and gained three steals for the Panther cause. Daylon Leary and Eric Hall each dished out four assists while Stephon Luster tacked on another three.
The Panthers and Lady Panthers return to conference competition on Jan. 23, traveling to Albany to take on the Dougherty County Trojans and Lady Trojans.
The ASHS teams will return to the Panther Den in Americus on Jan. 26, battling the Monroe High Tornadoes and Lady Tornadoes in another set of region 1-AAAA matches.