GSW men fall on the road in triple overtime 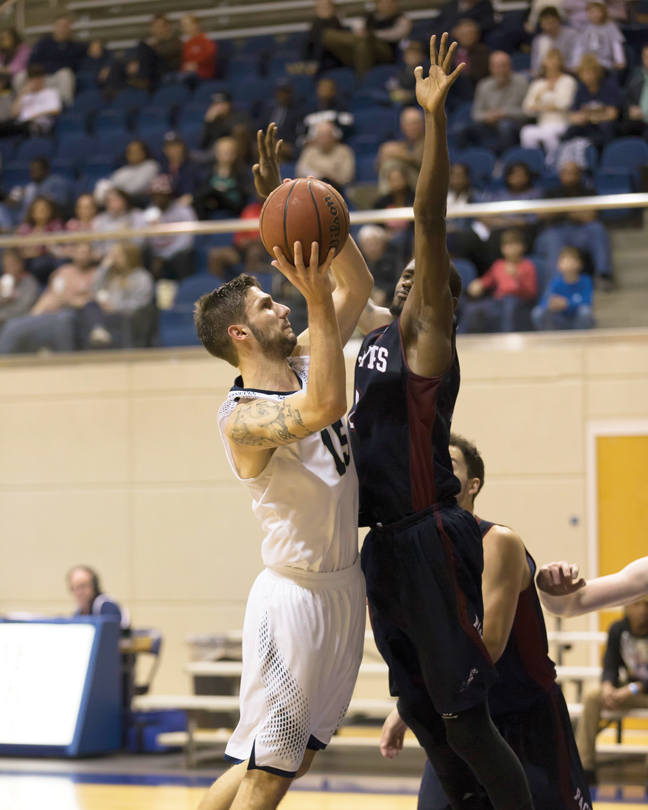 Photo by Chris Fenn: GSW’s Jure Gunjina takes a shot during a Jan. 16 contest in Americus. Gunjina earned a double double in the ‘Canes’ Jan. 18 contesr with 21 points and 12 rebounds.

SAVANNAH – The Georgia Southwestern men’s basketball team erased a 12-point second half deficit at Armstrong State University to force an overtime round on Jan. 18 in Alumni Arena, but it took three extra sessions for the game to be decided as Armstrong prevailed, 106-100.
Jure Gunjina hit a three-pointer in the closing seconds of regulation and Brandon Price rattled in a fall away put back in the lane as time expired in the second overtime to provide some of the drama for GSW.
The Hurricanes’ record falls to 7-9 overall and 3-6 in Peach Belt Conference play while Armstrong improved to 6-10, 4-5 in the PBC. The Hurricanes have not won in Alumni Arena (0-6) since joining the NCAA.
Southwestern entered the season having never scored 100 or more points in a PBC game after 10 years in the league, but have done so twice in the last five games.
It didn’t look like they’d get to the century mark early on. The Hurricanes missed their first four attempts from beyond the arc and eight of their first 10 shots overall to fall behind, 14-4. Armstrong led 38-32 at the half.
The Pirates managed to stretch their lead to a game-high 12 points, 55-43, with 12:15 to play.
GSW answered with a 10-2 run over the next three and-a-half minutes to pull within four but could get no closer until the final 70 seconds.
Price sank a jumper with 1:10 left in regulation play to bring the score to 70-67 and, following a defensive stand, Gunjina drilled the game-tying three-pointer with 11 seconds on the clock.
The first overtime went back-and-forth with GSW missing a hurried trey at the buzzer that would have won the game. Following a pair of missed free throws by Armstrong, Price provided the heroics when he put back a long rebound, falling to the ground in the lane as time expired to send the contest to a third overtime.
The ‘Canes fell behind by four points early in the final session and Armstrong stretched the margin to six as GSW missed the final three shots.
GSW launched a season-high 36 three-pointers. The Hurricanes struggled from long range over the first 28 minutes, going three for 17 (17.6 percent), which was well under their season average of 40.0 percent. The final 23 minutes were much more on cue as Southwestern made eight of 19 (42.1 percent).
Armstrong out-rebounded GSW, 46-42. The Hurricanes remained winless this season (0-7) when losing the battle on the glass. GSW also committed six more turnovers (19-13).
Gunjina was one of five GSW players to score in double figures. He led the bunch with a double-double, scoring 21 points and pulling down a game-high 12 rebounds. Adam Thoseby scored 20 points and Chandler Thomas made eight of 11 shot attempts towards his 18 points off the bench. Price came up a point shy of his first double-double as he scored 13 points and dished out a game-high nine assists.
Jamison Jeffers led all scorers with 22 points for Armstrong. Herbert Graham added 21 points off the bench and Shema Sabiiti posted a double-double with 18 points and 11 rebounds.
Next up for the Hurricanes is a trip to UNC Pembroke for a Jan. 23 game.