SCMS hoops off to region championships 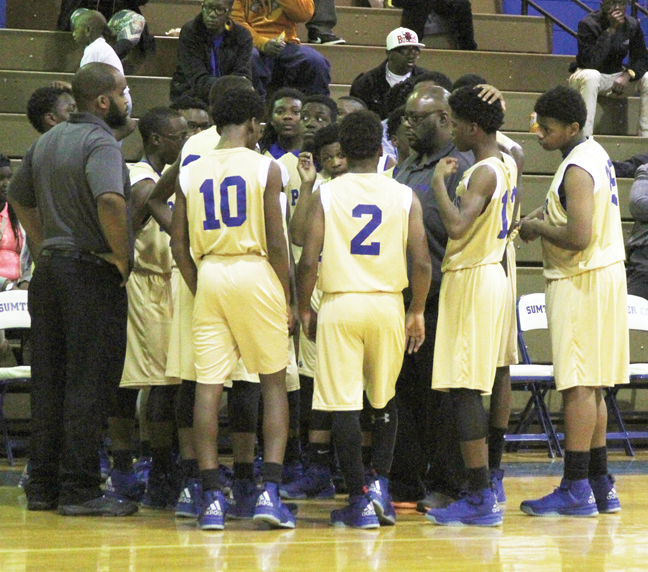 Michael Murray/Americus Times-Recorder: SCMS head coach, Rodney Shelton, addresses the Panthers during a time-out in the first half of the team’s semifinal match against Macon County on Jan. 21.

AMERICUS – The future looks bright for the Panther nation, as the Sumter County Middle School (SCMS) Panthers and Lady Panthers have both earned themselves a spot in the GHSA middle school region championship game.
On Jan. 20, the SCMS Lady Panthers earned a victory over Ben Hill Middle School to punch their ticket to the final round. The Lady Panthers currently have an 11-2 record n the season.
The next afternoon, the SCMS boys took the court in Americus to battle the Macon County Bulldogs, fighting their way to a comfortable 53-32 victory over the visiting team. The SCMS Panthers are currently undefeated on the season after 13 contests.
The championship will be held in Americus on Jan. 24 at the SCMS gymnasium. The Lady Panthers will compete against Crisp County at 4:30 and the SCMS boys will take the court after that match’s conclusion.
The Panthers will be taking on the Crisp County Cougars as well for the region crown. The Cougars earned their spot in the championship match after fighting their way out of a 10-point hole to earn a scrappy come-from-behind victory over the Worth County Rams in the semifinal match.
In the Panthers’ semi-final contest against Macon County, nearly every member of the team saw action over the duration of the game.
With starters, Trey Brown, Jyquaious Pitts, Jaiheem Banks, Melton McCoy, and Kanova Willoughby opening the action, the Panthers pulled ahead early and never looked back.
Shortly after tip-off, Kanova Willoughby’s twin brother, Quevoulia Willoughby, got in on the action and capped off the first quarter with a buzzer-beating three-pointer to put the Panthers ahead 13-5 heading into the second quarter.
The Panthers continued to widen the gap over the next two periods with Brown, Pitts, and the Willoughby brothers consistently scoring to build a 43-25 advantage before heading into the final frame.
The Panthers continued in this fashion through the fourth stanza with some of the team’s reserve players on the court, eventually sentencing the Bulldogs to the 53-32 loss.
After the game’s conclusion, Panther head coach, Rodney Shelton, spoke with the Times-Recorder, saying, “We came out kind of sluggish, but we did a better job in the second half of playing defense and making [the Bulldogs] turn the ball over and executing our offense… It was a pretty good game. We played much better in the second half than we did in the first half.”