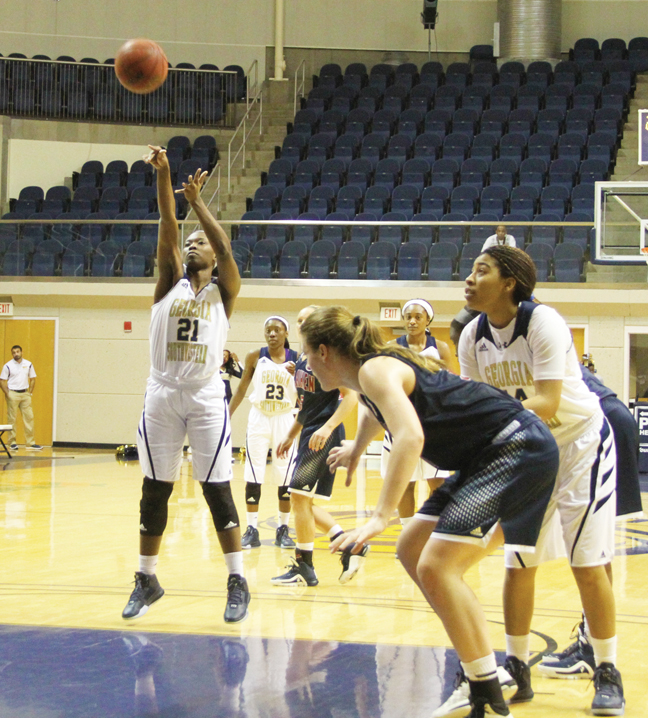 Michael Murray/Americus Times-Recorder: GSW’s Aleah Holden (21) tosses up a shot from the charity stripe during the Lady ‘Canes’ Jan. 16 contest against USC Aiken. Holden led GSW on Jan. 18, with 16 points and 10 rebounds.

SAVANNAH – Despite outscoring Armstrong State in the second half, the Georgia Southwestern women’s basketball team suffered a 69-62 loss on Jan. 18 night in Alumni Arena.
With the loss, GSW fell to 7-9 overall and 1-8 in the Peach Belt Conference (PBC) while Armstrong jumped to 11-7 and 3-6 in the PBC.
The Lady ‘Canes were down by 16 with 3:25 left in the first quarter when Khayla Owens put in a jump shot to try to give GSW some momentum. With 1:44 remaining, Yvonna Dunkley made a three-pointer, followed by a lay-up to put GSW in the double digits and close the first quarter down 25-13.
The Lady ‘Canes started off the second quarter with a jump shot from Aleah Holden, a three-pointer from Dunkley, and another jumper from Holden, followed by two free throws to come within three points of the lead.
Armstrong put in a trey, two lay ups, and a jump shot to take a 12 point lead with 4:46 left.
GSW’s Chanice Whitton followed with a lay-up and a free throw to close the gap to nine points.
Armstrong went on another streak, putting in three lay ups, a jump shot and a free throw to head into half time ahead 44-25.
GSW posted nine points in the third quarter, compared to Armstrong’s 12 to trail by 22 points going into the final period.
The Lady ‘Canes went on a bender and cut the lead to 13 points after Dunkley put in a free throw and a three-pointer, followed by a jump shot by Whitney Young and another trey from Kris Beckham.
Armstrong put in two free throws before GSW responded with a jump shot from Beckham and a lay-up from Ja’Quasha Sesler to come within 11 points of the lead.
With 2:29 remaining, the Lady ‘Canes began a rally, sparked by Holden tossing in a pair of free throws and a jump shot and followed by Jasmine McSwain with a lay-up. Holden put in two more free throws before Dunkley added a shot from the charity stripe to come within four points of the lead.
Unfortunately for GSW fans, the team fouled three times in the last 22 seconds and Armstrong was able to make three free throws to gain the 69-62 win.
Although the Lady ‘Canes put up 28 points in the fourth quarter, compared to Armstrong’s 25 points combined between the third and fourth, the turn overs in the first quarter were too much for GSW to overcome.
Holden led the Lady ‘Canes in the match with 16 points and 10 rebounds, recording her second double double of her GSW career. Holden’s first double double was earned during the Lady ‘Canes’ contest against USC Aiken in Americus.
Dunkley had 13 points and five rebounds. Whitton had eight points and five rebounds while Hall led with 7 rebounds.
The Lady ‘Canes are on the road on Jan. 23 to take on UNC Pembroke.