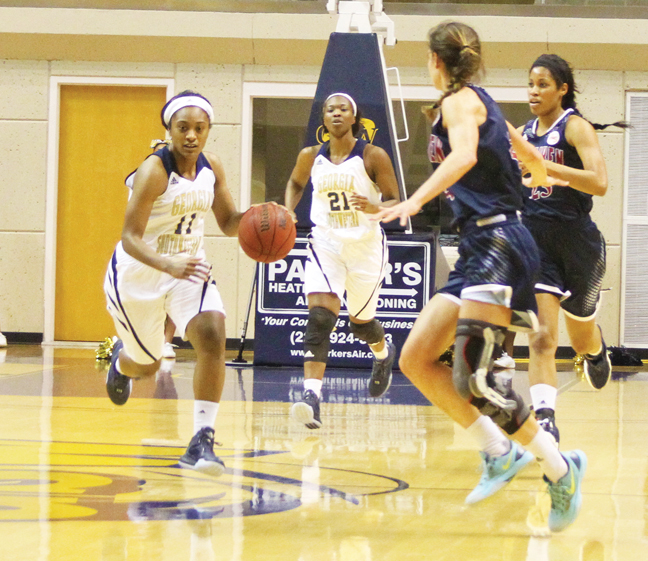 Michael Murray/Americus Times-Recorder: Kenyona Armstrong (11) and Aleah Holden (21) move down the court during a Jan. 16 contest in Americus. Holden and Armstrong ;ed the Lady ‘Canes to victory against UNCP on Jan. 23 with 14 and nine points, respectively.

PEMBROKE, N.C.- Aleah Holden led the Georgia Southwestern women’s basketball team to a 63-59 win over UNC Pembroke (UNCP) on Jan. 23 in the English E. Jones Center after GSW was down by two points at half time.
With the victory, the Lady ‘Canes captured their second Peach Belt Conference (PBC) win and improved to 8-9 overall and 2-8 in the PBC. UNC Pembroke moved to 8-9 overall and 3-7 in the conference.
The Braves led 8-2 in the first three minutes before Ja’Quasha Sesler put in a three-pointer to narrow the gap. UNCP quickly responded with lay-up to hang onto a five-point advantage.
Kenyona Armstrong then tossed in a lay-up, followed by Whitney Young with a free throw to come within two points, but the Braves continued to pull ahead, capping off the first quarter with a 18-12 lead.
GSW was down by eight with five minutes remaining in the first half when Armstrong put in a lay-up and a free throw to complete the three-point play and come within five points of the lead.
After the Braves sank a jumper, the Lady ‘Canes went on a little streak sparked by Holden, who made two baskets, followed by Kwante’sha Love with a lay-up to trail by one.
UNCP added a three-pointer with 28 seconds left and Holden responded with an perimeter shot to keep the gap at two points heading into half-time.
The Lady ‘Canes held the Braves to two points and then fell by four when UNCP put another three points on the board. Holden tossed in a lay-up to close the gap back to two and the Braves opened it back up to four points.
Va’Queshia Hall cut the lead back to within a bucket and Yvonna Dunkley put the Lady ‘Canes ahead with a three-pointer with 4:57 left in the third. Sesler and Khayla Owens continued GSW’s streak with a lay-up each to lead 41-36 with 3:44 remaining.
UNCP caught up to come within two points of the lead, but couldn’t hold on and went into the final quarter down 50-47.
GSW went on another bender after UNCP fouled in the fourth. A pair of free throws from Hall and Armstrong coupled with a three-pointer from Dunkley to put GSW up 56-49 with 6:18 left.
The Braves proceeded to climb back within three points and put pressure on the Lady ‘Caned with 2:29 to go. In the last 57 seconds, both teams fouled and made both free throws to keep the margin the same.
UNCP added a basket, but fouled three more times in the last 25 seconds and gave away three points, resulting in a 63-59 victory for GSW.
Holden recorded her third consecutive double double of the season with 14 points and 12 rebounds. Armstrong scored nine points while Dunkley tossed in eight. Sesler contributed six points and six rebounds.
GSW out-rebounded UNC Pembroke by one, 47-46.
The Lady ‘Canes return to action on Jan. 27, hosting Clayton State at 5:30 p.m. in the Storm Dome.