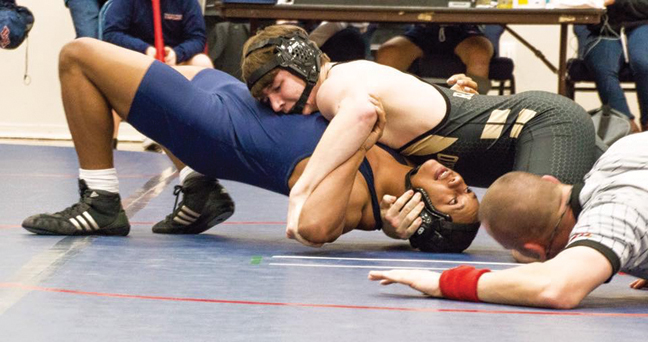 Photo by Lori Turton: 170-pound Southland sophomore, Morgan Youngdale, prepares to pin a Monroe opponent during the Deerfield meet on Jan. 21 in Albany. Youngdale won two matches at the tournament.

ALBANY – Deerfield Windsor School, in Albany, provided the host location on Jan. 21 for an unusual three-way wrestling match which saw the first ever meeting between the varsity Southland Raider wrestling team and two Albany GHSA schools, Westover and Monroe High School.
The Raiders won both of the team’s matches in the tournament, defeating Westover 45-22, before dealing a 45-18 loss to Monroe.
A number of Southland wrestlers went undefeated in the tournament contests, and three Southland wrestlers improved to 2-0 in their live matches.
These talented wrestlers include sophomore, Stephen Barnes, in the 285-pound weight class, sophomore, Morgan Youngdale, at 170 pounds, and senior, Brandon Revell, at 160 pounds.
The Raiders will participate in one more tournament before the Jan. 28 Region meet, set to take place in Macon.
The Raiders will take on former GISA member, First Presbyterian Day School.  According to a recent press release, “Southland’s head wrestling coach, Mike Smith, continues to seek out top level competition for the Raiders. In addition to a pair of early season tournaments at Trinity and Westfield, the Raiders also have lined up against AAAAAA Lowndes County and, perhaps the top program in all of South Georgia, Lee County.”
“The Raiders have dominated their region for a decade and are looking for another top three finish among the GISA schools at the Feb. 5-6 state tournament,” the press release continued. “[The state tournament] will be hosted by Southland in the Georgia Southwestern State University Storm Dome for the second consecutive year.” 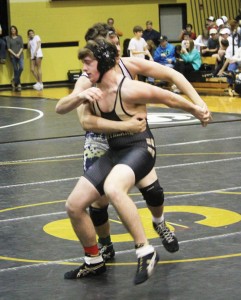 Michael Murray/Americus Times-Recorder:
Southland senior, Brandon Revell, reverses a Tiftarea opponents’ hold during a Jan. 14 meet in Americus. Revell won both of his matches at the Deerfield tournament on Jan. 21.