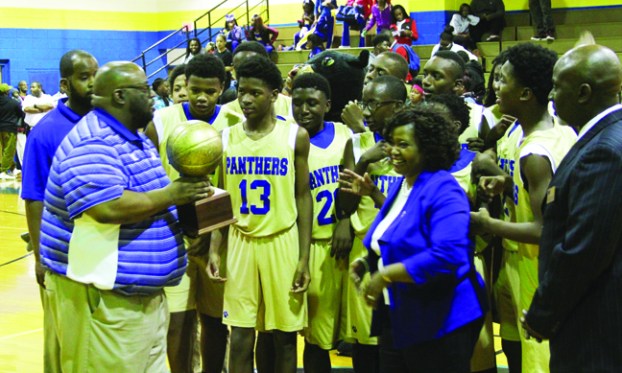 AMERICUS – Both Sumter County Middle School’s (SCMS) Panthers and Lady Panthers basketball teams earned their spot at the top of the Deep South Conference on Jan. 25 with a pair of championship wins over Crisp County.
The SCMS Lady Panthers opened the action in the school’s gymnasium, working for a 42-29 thrashing of the visiting Lady Cougars.
The Panthers capped off the night in a similar fashion, dealing a 70-34 defeat to the Cougars to leave the team’s season record untarnished after 14 match-ups.
When the competition comm

Michael Murray/Americus Times-Recorder:
The SCMS Lady Panthers pause for a photo with the trophy after winning the Deep South Conference championship in Americus on Jan. 25.

enced, the Lady Panthers came out fighting from the tip-off , with starters Jakayla Watts, DeAsia Ford, Nyja Carson, Destiny Sims, and Brianna Pope quickly amassing an 11-point cushion in the first period while holding the Lady Cougars to only two points. The SCMS girls never looked back from there, fighting their way to a 23-8 lead at half-time.
Seven different team members got in on the scoring action during this match as the Lady Panthers barreled their way to the 13-point victory.
Carson set an impressive pace for the Lady Panthers with 10 points, followed closely by Sims and Watts with nine and eight points, respectively.
After the girls’ victory, Lady Panther head coach, Shirley Williams, addressed the home crowd, saying, “This has been a long time coming.” Williams later spoke with the Times-Recorder. Asked how it feels for all of the team’s hard work to result in a first-place finish, Williams stated, “It’s a great feeling… We’ve been working towards this for years now. Each year, it seems we finish in second place… Finally, we have a group that took it all the way. They started in the sixth grade. Now, they are eighth-graders. We did what we needed to do.”
Williams said that this season’s team included eight eighth-graders. Four seventh-graders and one sixth-grader are expected to return to the team next season.
Williams is assisted in coaching the Lady Panthers by Jalesa Hamilton.
The Lady Panthers finished the season with an 8-2 record, recording their only losses to Fitzgerald and Crisp County.
After the SCMS girls received their championship trophy, the middle school Panthers prepared to take the court for the afternoon’s closer.
With Trey Brown, Melton McCoy, and Jyquavious Pitts starting alongside Kanova and Que’ Willoughby, the Panthers jumped out early in the contest, building a 17-6 pad in the opening frame.
By half-time, the Panthers had widened the gap to 31-17 and the team continued expanding the margin through the second half, eventually securing the 36-point win
12 team members contributed points to the victory, with McCoy and K. Willoughby each tossing in 11 points. McCoy did his part for the team on the defensive side of the ball with three steals while K. Willoughby dished out three assists in the match.
After the team received the region’s first-place trophy, Panther head coach, Rodney Shelton addressed the crowd, thanking the team’s supporters and saying, “This is a special group of kids. If we can get this group to stay together for the next four years, there’s no telling how good [the Americus-Sumter High School team] will be…”
Shelton stated that 16 of the team’s players will be entering high school next year.
Martin Mitchell and Mike Russell are the Panthers’ assistant coaches.

GSW men fall on the road in triple overtime