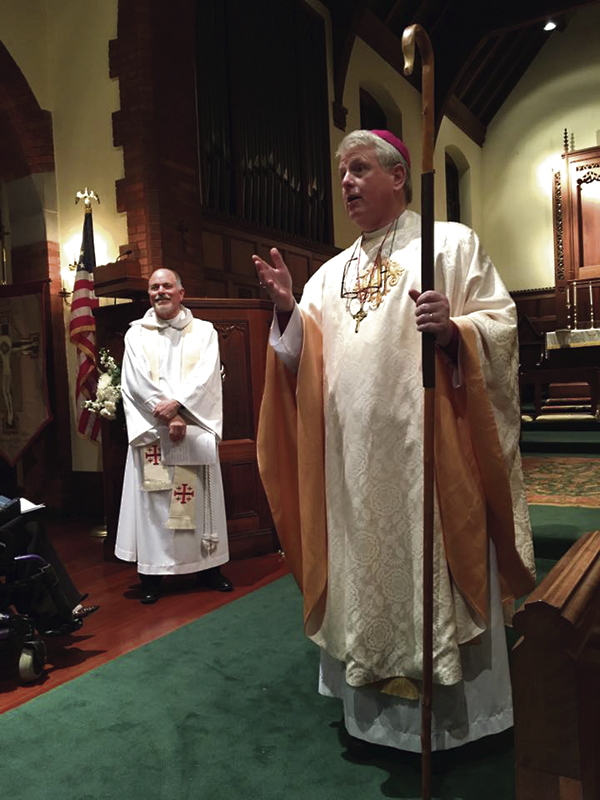 The Rev. Jeff Wallace, left, is installed the new priest at Calvary Episcopal Church, Americus, by the Rt. Rev. Scott A. Benhase, Savannah, Bishop of the Georgia Diocese, during an impressive and joyous service last Friday.

AMERICUS — The Rev. H. Jeff Wallace was installed as the 30th Rector of Calvary Episcopal Church, Americus, last Friday, Jan. 22,  during an impressive, joyful service. The institution of a new priest is a centuries-old Episcopal tradition dating back to the Church of England when a priest and people enter into a new covenant with one another.
Fr. Wallace was called to serve Calvary Episcopal last fall, moving here from Texas in December with his wife, Stephanie Wallace. His heritage in the Episcopal faith stems from his childhood, growing up in nearby Albany. He is a graduate of Lenoir-Rhyne College, Hickory, N.C., and Lutheran Theological Southern Seminary, Columbia, S.C. He served Lutheran churches before returning to the Episcopal Church and re-ordained an Episcopal priest Dec. 13, 2007. He worked as priest associate at a small parish in Pawley’s Island, S.C., while simultaneously serving as a hospice chaplain and grief counselor for many years.
The sanctuary was filled as hundreds gathered in the church for his installation by The Rt. Rev. Scott A. Benhase of Savannah, Bishop of the Episcopal Diocese of Georgia. The spirited procession included the vestry, search committee, acolytes, Wallace’s brother, the Rev. Bill Blaine-Wallace of Farmington, Maine, other clergy friends and colleagues from a wide area, and the Calvary choir.
During the “induction” section of the service, the Bishop, representatives of the congregation and the clergy of the diocese presented Wallace with gifts as symbols of Calvary’s ministries including a vessel of baptismal water from the Bishop as well as a lighted candle to work with the diocese in speaking the light of Christ to all people, a Bible from the people, a prayer book for spiritual formation, a hymnal companion, a clerical stole from the altar guild, a mop as a reminder of mutual grace and forgiveness, a toy from the Sunday school and commitment to children’s physical and spiritual well-being, blessed oil for healing, a coffee cup, Frisbee and a box of Kleenex as a reminder of the spiritual union of good times in conversation, recreation and mutual consolation.
Following the induction, Wallace was welcomed as the new rector and was greeted with applause after which he thanked everyone.
“It is a blessing to be your rector and a blessing to reach out to the wider community,” he said. “You have so blessed me and my family. I can only pray for and strive to be such a blessing to you and to our Lord’s church. Our new beginning makes this an ideal time for anyone to unite or reunite with our church family. While open arms await anyone who comes to Calvary Episcopal, we also pray for others who have our same shepherd in Jesus Christ but belong to another faith. There is only one church, one body, one faith, one hope and one Baptism. One of the things I love about Calvary is our mission statement: ‘We strive to put Christ’s love into action through engaged and inclusive worship, study and service.’”
The sermon was delivered by the Rev. Canon Frank Logue of Savannah and the Gospeller was the Rev. Diane Hall, deacon at Calvary. Other ministers of the liturgy  were the Rev. Leigh Hall, associate rector at St. Paul’s Episcopal Church, Albany; Ross Chambliss, Lay Eucharistic minister and Leninist, and the Rev. Frederick A. Buechner, immediate past interim priest of Thomasville served as host bearer. Joyous and beautiful music was provided by Donna Becton, organist; Bobby Helms, choir director, conducting the Calvary choir and soloists Julie Megginson, soprano, and James Scott, alto.
The service was followed by a lavish and festive reception in Lawrence Parish Hall.
Calvary Episcopal Church, founded 151 years ago, has been at its present location at 308 S. Lee St. since 1869. The church’s history as a leader in varied outreach causes is worthy, the most recent being initiating the local food pantry that developed into a wider program. Other recent outreach areas include sponsoring arts and cultural programs and a vibrant thrift shop that assists the faith clinic, people in need and other worthy causes.
The present church building, known for its architectural and artistic heritage, was designed by Ralph Adams Cram, the leading ecclesiastical architect in America in the early part of the 1900s. Construction began in March 1919, and was completed in 1921.
In early 2000, under the leadership of then rector, the Rev. Reginald Gunn, the restoration of the Cram church and significant additions were made in the parish hall. Martin Johnson, an architect and a Calvary parishioner at the time who has since moved away, donated his services. Under his professional direction a master plan for the entire campus was developed. The plan included the restoration of the Cram church, reorientation of the parking lot and the parish hall entrance as well as the addition of a new kitchen, bathrooms, and enclosed loggia surrounding a cloistered area and labyrinth. In addition, a master plan for the gardens was developed that included a second memorial garden to join the previous 1994 addition. The exterior façade of the parish hall was vastly improved with the addition of an open, covered loggia which connected the new entrance to the parish hall with the previous free standing Sunday school building. The parish hall addition was dedicated May 18, 2003, by the Rt. Rev. Henry I. Louttit Jr., then Bishop of Georgia. 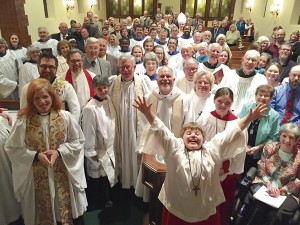 The Rev. Jeff Wallace, center, is applauded after being installed the new priest at Calvary Episcopal Church, Americus. Wallace is the 30th rector at Calvary in its 151-year history.

Man of the Year at Concord Methodist