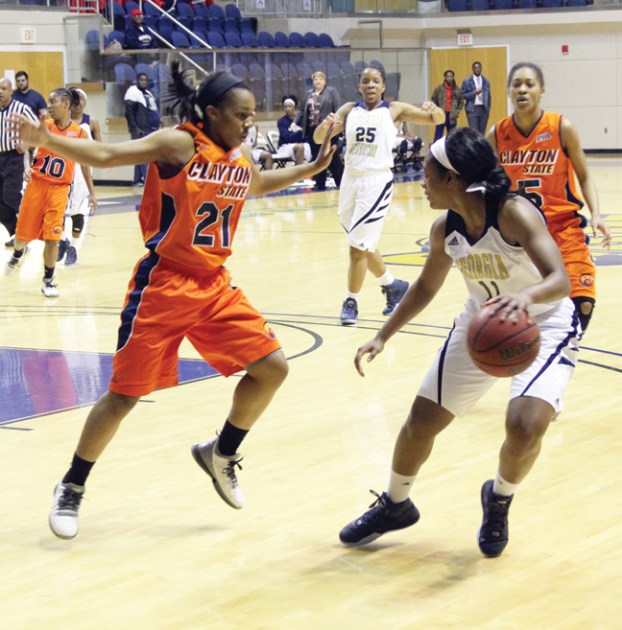 AMERICUS – The Georgia Southwestern State University (GSW) women’s basketball team had their work cut out for them coming into the team’s Jan. 27 match-up against no. 19-ranked Clayton State. That afternoon, the Lady ‘Canes earned a huge 71-59 upset, handing Clayton State their first Peach Belt Conference loss and marking the GSW team’s first ever win over the Lady Lakers since joining the NCAA in 2006.
GSW picked up their second consecutive conference win to improve their record to 9-9 overall and 3-8 in the PBC. Clayton State, with their first conference loss and second loss of the season, now moves to 16-2 overall and 10-1 in the PBC.
The Lakers tried to make a move on GSW’s lead and cut it to eight points with 6:27 remaining in the second quarter, but the Lady Hurricanes remained vigilant and stretched their lead to 15 after an 8-0 run.
Aleah Holden made two free throws followed by a lay-up and Va’Queshia Hall capped it off with two jump shots to lead 34-19 with 3:49 left and locked in a 14 point advantage heading into half-time.
After returning from the break, the Lady ‘Canes continued to out-maneuver the ranked Lady Lakers and took their largest lead of 19 points at the 6:03 mark. Clayton State tried chipping away at the lead halfway through the third frame and came within 11 points of GSW with 2:19 to go.
Hall put in a jump shot followed by Yvonna Dunkley with a three-pointer to expand the gap to 16 points before the Lakers put in one last basket ahead of the buzzer to trail 56-42.
Dunkley opened up the fourth quarter with another trey to give GSW a 17-point advantage. With 7:49 remaining Clayton State closed the gap to nine after a seven point streak.
The Lady ‘Canes put up five more points with a lay-up from Hall and two free throws from Armstrong before Clayton State answered with two free throws of their own to hold GSW’s lead to 11 points.
Armstrong tossed in seven more free throws to give the Lady ‘Canes a 15-point advantage and Clayton State coupled a free throw with a jump shot in the final seconds to cut the lead by three and give GSW a 12-point victory.
Armstrong led the Lady ‘Canes with a game-high 18 points and Dunkley scored 16. Holden recorded her fourth consecutive double double with 10 points and 12 rebounds.
GSW out-rebounded Clayton State 54-37.
The Lady ‘Canes are back home on Jan. 30 at 2:30 p.m. to host Columbus State in the Storm Dome.