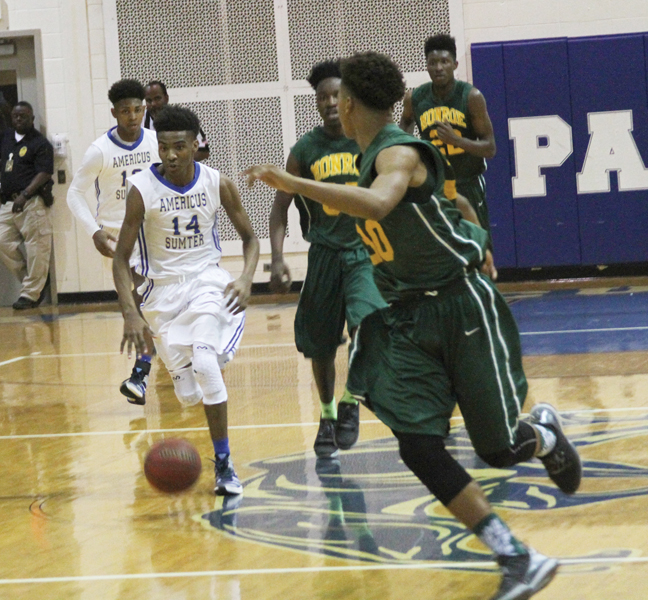 Michael Murray/Americus Times-Recorder: ASHS’ Aiden Sanford moves the ball down the court past two Monroe defenders during the Panthers’ Jan. 26 contest in Americus. Sanford contributed four steals and seven points for the Panthers in the match.

AMERICUS – Following a sweep of the Dougherty County Trojans and Lady Trojans on Jan. 23, the Americus-Sumter High School (ASHS) basketball teams returned to the Panther Den in Americus on Jan. 16 to continue region competition against Monroe High School.
It will come as no surprise to fans of the Lady Panthers that the Americus girls devastated the visiting Lady Tornadoes in the home match. The Americus girls took a substantial 63-34 win in the contest.
The Panthers then took the court, fighting their way to a triple-overtime finish in which they eventually fell 56-51.
With the win, the Lady Panthers improve their overall record to 19-1. The Lady Panthers are currently undefeated in 1-AAAA play.
The defeat drops the ASHS boys’ overall record to 13-6. The team’s region 1-AAAA record is currently 7-2.
The Lady Panthers’ first match of the evening began with intensity tense, as the Lady Tornadoes matched them point for point through the first frame. With the score tied 9-9 at the beginning of the second frame, lay-ups from Atyanna Gaulden and Kayla Howard sparked the ASHS girls into action. Timia Swanson, Jykiera Long, and Amber Hicks each got in on the action as well, contributing goals and assists to a 21-2 run over the rest of the first half.
The ASHS girls continued to expand their advantage in the third frame, racking up a total of 38 points before Monroe finally saw the chance to score again.
The carnage continued throughout the remainder of the match, eventually leaving the Lady Panthers with the 63-34 win.
Swanson led the Lady Panthers in the victory with a double double, tossing in 18 points and bringing down 11 rebounds. Swanson also led the team in steals, with seven.
Gaulden and Howard followed close behind with 14 and 13 points, respectively. Gaulden dished out nine assists for the win while gaining four steals and two blocks. Howard pulled in nine rebounds and nabbed a pair of steals.
Hicks added another nine points to the win, contributing six steals along the way.
Following the girls’ victory, the Panthers hit the court to face their Monroe counterparts. With both teams entering the match with an overall record of 13-5, the crowd could easily sense that the Panthers were in for a tough test.
The Tornadoes quickly confirmed this suspicion, taking off on an 11-0 run that lasted nearly half of the first period.
With 4:15 left in the initial frame, ASHS’ Aiden Sanford broke the Panthers’ silence with a free throw, followed by a steal, resulting in another charity shot from Stephon Luster. Fred Bryant capped off the quarter with a long three-pointer from the center to leave the Panthers down 11-5 heading into the second frame.
The Panthers continued to chip away at the gap during the second quarter, aided by a trey from Daylon Leary and a converted rebound from Malik Jackson. Kiante Sims got in on the action with a free throw before Jackson tossed an assist over to Luster. Bryant then drained a pair of free throws before Sanford put up a Karmil Hamilton-assisted lay-up to cap off the frame. By Half-time, the Panthers had come back to within five points at 22-17.
ASHS’ boys made their move when play resumed with a 9-2 run sparked by long fast break lay-up by Sims, followed by a free throw. Monroe got the crowd riled up as they responded with a dunk, but the Panthers would not relent.
Luster dished out assists to Bryant and Leary to equalize the score at 24-24. With one minute left in the third frame, Sanford then burst through Monroe’s defenses to toss in a bucket and give the Panthers their first lead of the contest. ASHS was up 26-24 at the onset of the fourth frame.
Monroe quickly neutralized the gap early in the final period, tying the score 26-26. The rest of the period saw the score tied twice more as the teams battled furiously for the advantage.
By the one-minute mark, Sims managed to snag Monroe’s pass-in and take it directly to the bucket to leave the teams with a final 36-36 tie. The Panthers managed to draw a foul with 10 seconds left to earn one last possession, but Leary’s three-point attempt bobbled around the rim, eventually slipping out and forcing overtime.
Sims opened the initial overtime period with a dunk to get the home crowd roaring their approval and Bryant followed with a Luster-assisted lay-up. The Tornadoes were determined to match their every move, however. Two more lay-ups by Sims left the Panthers with 45 points, but Monroe was with them every step of the way, tying the score and pressing on to another overtime round.
Monroe tossed in a lay-up in the second bonus round to gain a slight edge that was soon neutralized by Ben Walters, assisted by Leary. With the score tied 47-47, the teams entered the fray once more for the third overtime period.
The Panthers would not be so fortunate in the final overtime frame, however. A long trey from Eric Brown, and lay-ups from Sims and Walters left the score at 56-51, just a handful of points short of the Panthers’ ninth straight victory.
Sims led the way for the Panthers in the tough loss, connecting on six of ten attempts from the floor on his way to 15 points. Bryant followed close behind, draining a pair of three-pointers to boost his 12-point contribution. Leary added a pair of treys as well en route to eight points scored for the team. Sanford tacked on another seven points to the Panthers’ final tally.
Luster dished out seven assists in the match, coupled with four steals. Sanford gained four steals as well.
Sims led the team on the boards, bringing down six rebounds. Sanford and Bryant each brought down four.
The Panthers and Lady Panthers returned to action on Jan. 29, traveling to Albany to take on Westover. The results of these matches were not available at press time.
ASHS will return to the Panther Den on Jan. 30 to face Worth County. 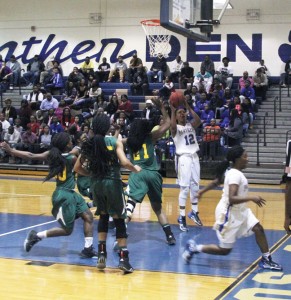 Michael Murray/Americus Times-Recorder:
ASHS’ Timia Swanson tosses in a lay-up during the Lady Panthers’ Jan. 26 match in Americus. Swanson led the Lady Panthers to victory with 18 points in the contest.