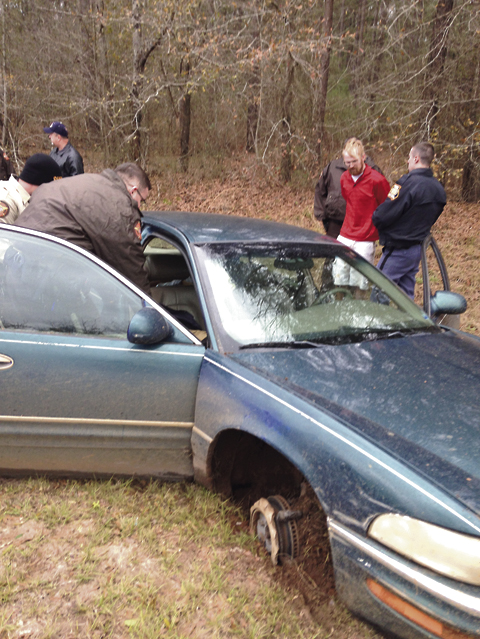 The suspect in the Walgreen armed robbery, Izzuddin Slaton, in red, shortly after he crashed his car, is shown being handcuffed by authorities.

AMERICUS — A man walked into Walgreen’s, at the corner of Mayo and Forsyth streets, at 9:30 a.m. Saturday, wielding a knife. After threatening the cashier nearest the front door, who handed over the cash, he fled in a car.
Quick thinking by the 26-year-old female clerk, and a lot of other help, ultimately led to his arrest, but there was much action over the next half-hour.
Maj. Richard McCorkle, who heads the investigations division of the Americus Police Department, identified the suspect as Izzuddin Stonewall Slaton, 26, of 170 Harvey Road, DeSoto.
McCorkle said the clerk immediately called 911 after the suspect fled, giving a description of the man and the vehicle he drove away in.
A quick response from police officers located the suspect in Oak Grove Cemetery, sitting in his car. The suspect took off with officers in pursuit, McCorkle said.
Other law enforcement agencies — the Sumter County Sheriff’s Office and the Georgia State Patrol Post 10, Americus — joined in the chase which ended about five miles south of DeSoto on DeSoto Seed Farm Road in rural southeastern Sumter County, where the suspect crashed his car and was taken into custody. McCorkle said there were no injuries.
Slaton remains incarcerated at the Sumter County Jail, charged with armed robbery, aggravated assault, felony first-degree burglary, and possession of a knife during the commission of a crime. He is also charged with a litany of traffic charges: three counts of failure to obey a stop sign, two counts of failure to maintain lane, seat belt violation, failure to yield the right of way, failure to obey signs or control devices, three  counts of reckless driving, two counts fleeing or attempting to elude officer, removing or affixing license plate with intent to conceal or misrepresent identity, failure to maintain insurance, and driving under the influence of alcohol or drugs.
McCorkle thanked Lt. Tim Green’s shift of the Americus Police Department “for an outstanding job in locating the suspect quickly.” He also thanked Sgt. Jim Bass and his team from the Sumter County Sheriff’s Office “for maintaining contact with the suspect in pursuit,” and the Georgia State Patrol for their help in pursuing the suspect and their maneuvers that ultimately led to his arrest.