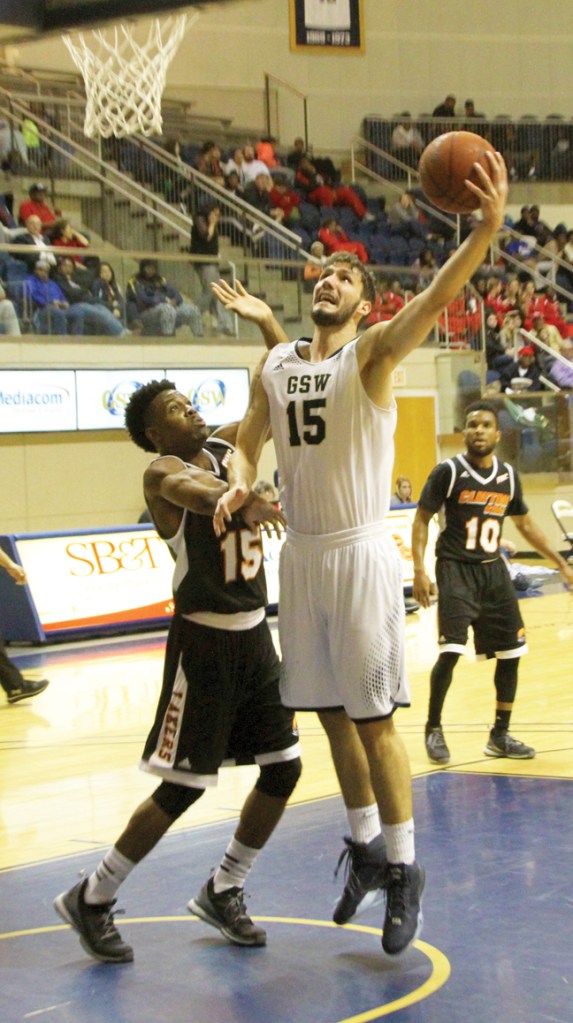 Michael Murray/Americus Times-Recorder: Jure Gungina takes it to the bucket during a Jan. 27 contest in Americus. Gunjina led the ‘Canes on Jan. 30 with 15 points, seven rebounds, and four assists.

AMERICUS – A 19-4 run by Columbus State (CSU) midway through the second half blew open a tight game as Georgia Southwestern suffered a 76-59 loss on Jan. 30 in the Storm Dome in Americus.
With the loss, the Hurricanes fell to 8-11 overall and 4-8 in the Peach Belt Conference (PBC) while Columbus State won its third straight game and improved to 15-4, 9-3 in PBC play. GSW has dropped five of the team’s last seven games while Columbus State has won five of seven.
After trailing by as many as nine points in the first half, GSW closed out the opening session on an 8-2 run to pull within a bucket, 34-32, at the intermission.
With five unanswered points to open the second half, the Hurricanes had their largest lead of the afternoon at 37-34 with 19:30 left to play.
Columbus State responded by scoring nine straight points to jump back in front, 43-37. The Cougars would not trail again.
GSW clawed to within two points, 48-46, before things began to go south as CSU proceeded to go on the 19-4 run aided by the free throws from three GSW technical fouls.
Southwestern, which entered the game ranked first in the PBC in three-point shooting, was held to 2 of 12 (16.7 percent) from beyond the arc over the final 20 minutes.
Jure Gunjina led the Hurricanes with 15 points and seven rebounds  while matching teammate Brandon Price in assists with four. Adam Thoseby added 13 points and Chandler Thomas scored 10.
CSU had four players score in double figures, led by Cam Baker with 18 points. Baker added a game-high seven assists. Arben Camaj scored 16 points, Brentine Taylor chipped in 14 and Darren Daniel added 11.
The Hurricanes play the final game of their three-game homestand on Feb. 3 at 7:30 against Montevallo.