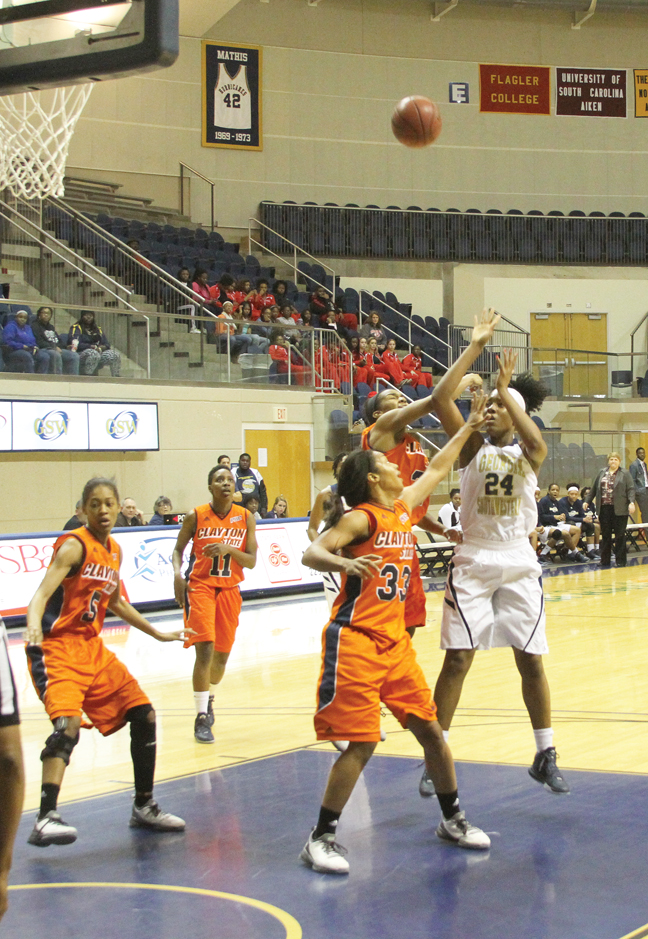 Michael Murray/Americus Times-Recorder: Chanice Whitton (24) tosses up a shot from the key during a Jan. 27 contest in Americus. Whitton contributed nine points and seven rebounds to the Lady ‘Canes’ Jan. 30 match.

AMERICUS – Even after out-scoring the Columbus State (CSU) Lady Cougars in the first and fourth quarters, the Georgia Southwestern women’s basketball team lost 72-56 on Jan. 30 at the Storm Dome in Americus.
The loss drops GSW to 9-10 overall and 3-9 in the Peach Belt Conference (PBC)while CSU increases to 15-4 and 9-3 in the PBC.
The Cougars took an early lead and the Lady ‘Canes tied the game twice before taking the lead themselves with 3:30 left in the first quarter.
Columbus State snagged the advantage back with a three-pointer and Yvonna Dunkley responded with a trey of her own to recapture it. Whitney Young then put in a lay-up to build a four-point cushion at the end of the initial stanza.
The Cougars tied the game three minutes into the second quarter and took the lead back with 6:22 left. The Lady ‘Canes replied with a lay-up and a free throw from Chanice Whitton to pul ahead by one with 5:41 remaining.
The Cougars unsheathed their claws and went on a streak with two three-pointers, followed by a jump shot and two free throws to edge GSW by 11 before the spree ended with a foul.
Aleah Holden made both free throws and Columbus State capped off the second quarter with a shot from the charity stripe and another three-pointer to head into half-time ahead 37-24.
Columbus State extended their lead to 18 points halfway through the third and headed into the last quarter up 57-39.
The Lady ‘Canes made a hard push, attempting to cut the Cougars’ lead and came within 13 points with 3:44 to go after Dunkley put in a three-pointer. The Cougars proceeded to take off on a seven-point streak to build a 20-point advantage, but GSW kept pushing and put in two more baskets in the last 45 seconds to narrow the loss to 72-56.
Holden recorded her fourth successive double double with 11 points and 12 rebounds. Dunkley led GSW in the match with 12 points. Whitton contributed nine points and seven rebounds.
The Lady ‘Canes return to their home court on Feb. 3 to host Montevallo at 5:30. 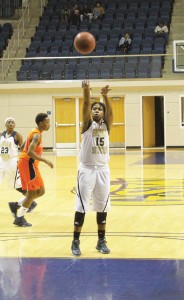