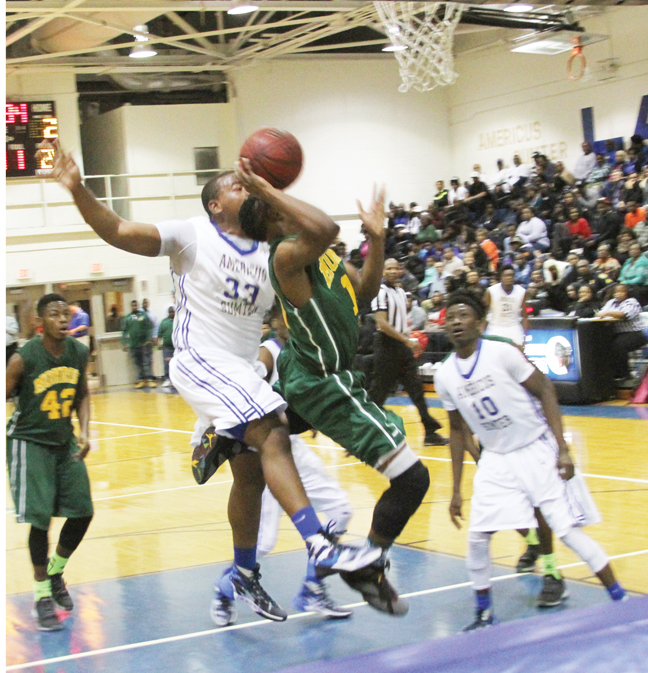 Michael Murray/Americus Times-Reorder: ASHS’ Ben Walters leaps up to block an opponent during a Jan. 26 contest in Americus. Walters contributed 14 points and six rebounds to the Panthers’ Jan. 29 victory over Westover.

AMERICUS – The Americus-Sumter High School (ASHS) Lady Panthers have kept up the good work over the last week, bringing in another pair of substantial victories over the Westover Lady Patriots and the Worth County Lady Rams.
The ASHS girls took down Westover 72-47 on Jan. 29 in Albany before returning to the Panther Den on Jan. 30 to deal an 81-20 defeat to Worth County.
The Panthers had a busy weekend as well, traveling to Albany with the Lady Panthers on Jan. 29 to defeat the Patriots 56-50. The next afternoon, the Panthers returned to Americus to battle Worth County. After a long, back-and-forth bout, the Panthers eventually fell to the Rams 64-62 in double overtime.
The pair of wins leaves the Lady Panthers with a 21-1 overall record. The ASHS girls are currently undefeated in region 1-AAAA competition.
The series leaves the Panthers’ overall record at 14-7, with the team holding steady at 8-4 in region competition.
The Lady Panthers got a strong start in their Friday match against the Lady Patriots, outscoring their hosts 18-11 in the first frame. ASHS’ girls kept up the momentum in the second stanza to pull ahead 34-20 by half-time.
From there, the talented Americus team never looked back, eventually sentencing Westover to the 72-47 loss.
Americus’ ladies rode this momentum into the next evening’s match, working for an 81-20 trouncing of the visiting Lady Rams.
The Panthers, on the other hand, found themselves unable to gain an edge in the first period of the Albany match against Westover. Over the initial eight minutes of play, the Patriots kept pace with the Panthers, holding the score to 10-10 as the game progressed into the second quarter.
The Panthers made short work of the Patriots in the second frame, however, outscoring their hosts 18-10 to take a 28-20 advantage into the locker room at half-time.
Westover made their move after returning from the break, holding the Panthers to only nine points and adding 14 to their own tally. With the gap whittled down to only three points, the Patriots looked to stage their comeback in the final frame. The powerful Panthers shut down the host’s comeback attempts, however, outscoring Westover 19-16 over the last eight minutes to cinch the six-point win.
ASHS’ Aiden Sanford and Ben Walters led the Panthers to victory in the contest, each contributing 14 points to the win. Walters led the team on the boards with six rebounds while Sanford came away with four steals in the contest.
Kiante Sims and Eric Hall were the other main contributors with nine points each. Stephon Luster and Eric Brown led the team in assists, dishing out three apiece.
Josh Lusane, Karmal Hamilton, Sims, and Hall each contributed blocks to slow their competitors’ progress.
The next afternoon, the Panthers returned to Americus to take on Worth County.
The Rams leapt ahead early, taking a 13-11 lead over the Panthers in the initial period. Worth County’s shooters kept up the aggressive play in the second frame to amass a 26-19 lead by half-time.
The visitors added another point to the gap in the third period, outscoring the Panthers 20-19.
The ASHS boys made their stand over the final eight minutes, steadily chipping away at the visiting team’s advantage and eventually clawing their way back into contention as the clock wound down. With 42 seconds left to play and two points behind, the Panthers managed to tie the score 56-56 and force two overtime periods.
Worth pulled ahead quickly in the final overtime round, forcing the Panthers to play catch-up for the majority of the four minute period.
With 10 seconds of game time remaining and the home crowd on the edges of their seats, the Panthers made a last-ditch effort at a three-pointer which fell short, sealing the victory for the visiting Rams.
The Panthers and Lady Panthers are currently enjoying a hard-earned break and are scheduled to return to action on Feb. 5 for the teams’ final region 1-AAAA tests of the regular season against Bainbridge in Americus. The following evening, the teams will host Lee County in the Panther Den for a non-region contest.