SCS interim superintendent: A good listener who is here to help 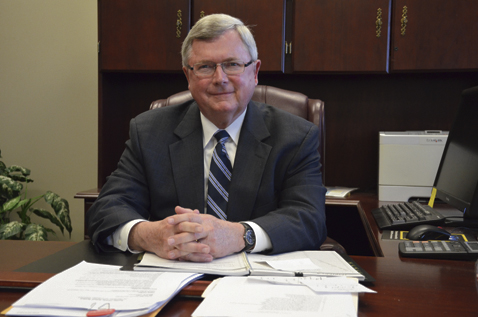 Larry Walters, interim superintendent of Sumter County Schools, at his desk in the Central Office.

AMERICUS — Larry Walters, Ph.D., has spent 43 years in public education because he believes public education best prepares students for life outside the classroom.
“Having students of different backgrounds, socio-economic groups, and ethnic groups reflects the world where students are going to live and prepares them to live in that world,” Walters said.
The Sumter County Board of Education recently named Walters as interim superintendent replacing Donnie Smith, who resigned two days before Christmas. Walters comes to the system after most recently serving as superintendent in neighboring Lee County for the past 12 years.
In describing the keys for a successful public school system, Walters sites the commitment of the entire community to have the best schools possible. He also stresses the importance of good principals at each of the schools in the system.
“I’ve never seen a high quality system without good principals,” he said. “The principal is critical to the success of the school. He or she sets the tone and makes recommendations on who the teachers should be.”
A good principal, he continued, enjoys working with his or her staff and students.
“School is a people business and if a person is going to be successful, they have to enjoy being around people,” Walters said.
He also sited stability as a key component to a successful school system: a lack of turnover in leadership. In the 12 years he served as superintendent in Lee County, Walters worked with most of the same school board members and administrators.
In his first meeting with SCS Central Office staff, Walters described himself not as an agent of change but as a good listener who is willing to work with teachers and staff to figure out ways to improve their working environment.
“Each day I learn more about Sumter County Schools,” he said. “Having worked in many states, I may have the opportunity to suggest things that make it better.”
In addition to serving as superintendent in Lee County, Walters was also superintendent of the Decatur City School System in Alabama for seven years, was principal at Oak Park Middle School in Alabama, was instructional supervisor for Decatur City Schools, and was the supervisor of the Alabama State Department of Education.
After graduating from Kent State University in 1969, he embarked on a short-lived career as an auditor for Roadway Express. Anxious to get back to an academic environment, he applied for, and was awarded, a highly competitive fellowship which allowed him to complete in two years a rigorous doctorate program in education at Ohio State University.
Named the “Man of the Year in Lee County in 2015,” he was described at the award ceremony as, “ … a man of impeccable character who is personable, even-keeled, perceptive, approachable, intelligent, thoughtful, witty, straightforward, pleasant, and a good listener.” He was credited by the previous Lee County superintendent for changing a dysfunctional administration to one based on trust, teamwork, and cooperation. Walters said he is likely to remain in Sumter County for either three or six months while a search is carried out for the next superintendent.
His greatest joy during his educational career has been the success he helped facilitate in co-workers who went on to be superintendents and principals.
His greatest frustration is the increasingly narrow focus of what education has come to mean through an over-emphasis on testing.
“Accountability is important, but education is not just the right answers on a test,” he said. “It’s about instilling values, disposition and attitudes; it’s about making a person well rounded.”
Walters worked with an outstanding theater program and other fine arts programs in the Lee County Schools.
“That is why arts in education is very important. It makes a person well-rounded,” he said.