Falcons soar away from GSW hoops 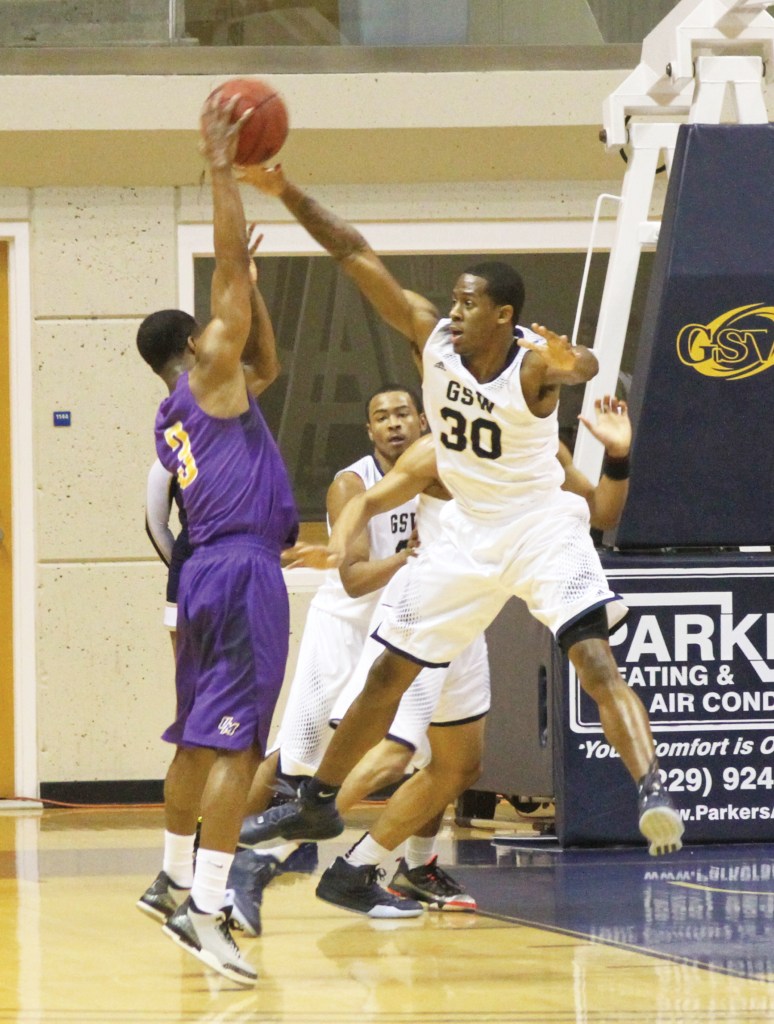 AMERICUS – The Georgia Southwestern men’s basketball team allowed a season-high 24 offensive rebounds to Montevallo University on Jan. 3 in the Storm Dome and the visiting Falcons made the most of the extra scoring opportunities, rallying to defeat the Hurricanes, 75-72.
GSW dropped its third-straight game and fell to 8-12 overall and 4-9 in Peach Belt Conference (PBC) play while Montevallo won its seventh straight game and improved to 14-6, 10-3 in the PBC.
A 9-0 run midway through the first half helped give GSW its first double-digit lead of the evening as the Hurricanes led 31-21 with eight minutes left before the break.
Montevallo clawed back to within three points on three different occasions but an Adam Thoseby three-pointer in the closing seconds of the period allowed GSW to extend its margin to six points, 50-44, at the half. Southwestern shot a sizzling 63 percent over the opening 20 minutes and drained nine of 17 from long range.
The Hurricanes picked up where they left off to start the second stanza by going on a 9-2 run to open their largest lead of night, 13 points, with 14:21 remaining.
Montevallo responded once again, this time scoring nine unanswered points in less than three minutes to shave the GSW lead to four.
Following a pair of ties, GSW relinquished the lead for good at the 3:47 mark when Terrell Lipkins put Montevallo ahead, 69-68.
Brandon Price scored a quick lay-up with 14 seconds left to pull GSW within a point, 73-72, and Montevallo missed both of the ensuing free throws on the other end of the floor to keep the door open for late GSW heroics. The Falcons, however, came up with the loose ball off the second miss and sank their next two attempts from the charity stripe to stretch their lead to three points with seven seconds left.
Thoseby led the way for the Hurricanes with a game-high 20 points. Price added 15 points and five assists. Chandler Thomas knocked down five of six shots on the way to his 14-point evening. Damien Leonard pulled down a game-high seven rebounds.
Southwestern travels to Morrow on Jan. 6 for a 3:30 p.m. game against Clayton State.