AMERICUS – Southland Academy’s wrestling Raiders hit the mat for the final time this season on Feb. 6, hosting the two-day GISA state wrestling championships at the Storm Dome at Georgia Southwestern State University (GSW). As a group, the Raiders finished in second place at the tournament behind traditional powerhouse, Bulloch Academy. The Raiders finished the tournament with 141 points, 50 points ahead of third-place finisher, Trinity Christian. Robert Toombs Academy earned a close fourth-place finished, followed by Deerfield-Windsor in fifth place.
According to a press release from Southland Academy, this was the team’s best finish since it took the runner-up spot behind Riverside Military Academy in the 2006 tournament. The Raiders finished fourth in 2012 and third in 2013, 2014 and 2015. The Raiders had 10 Individual wrestlers place in the tournament, nine of whom are expected to return next season.
The press release went on to say that head wrestling coach, Mike Smith’s “patient, year-by-year approach and his development of the successful middle school program has the young Raiders team on the doorstep of competing for a state title in the years to come.”
The Raiders had three wrestlers plow through their early competitors at the meet to earn a spot in the championship round.
First up was Cole Landreth in the 106-pound division, who competed against Bulloch Academy’s Jake Lawsdon. Lawsdon entered the match with 20 season wins under his belt compared to Landreth’s season record of 17-0. Landreth made short work of his opponent in the final match, pinning Lawsdon in under a minute to earn the title of state champion.
After winning the title, Landreth stopped to speak with the Times-Recorder. Asked how it felt to be the state champion, Landreth replied, “It’s unbelievable. All of the hard work from summer wrestling has paid off.” Landreth, now a freshman, said that he has been wrestling since his fifth grade year and has amassed an impressive 64-14 overall career record. Landreth has earned the title of region champion twice and has been named a UDSA All-American two times.
Up next for the Raiders was Tanner Rundle in the 120-pound weight class. With a season record of 8-8 and a career record of 38-18 coming into the final showdown, Rundle stepped on to the mat to face Bulloch Academy’s Kyle Samuels, who entered the ring with a 35-1 season record.
After a tough match, Rundle, who was the 2016 region champion in his weight class, eventually succumbed to a pin in the second round, wrapping up the season with a second-place state finish.
Rundle had previously finished in first place in the 2015 region tournament and third in the 2013 region tournament.
Stephen Turton rounded out Southland’s contenders for the state title, battling Tiftarea’s Austin Woods. Turton entered the competition with a 21-1 season record, compared to Woods’ season record of 15-3.
The Raiders’ final match of the afternoon went the full three rounds, with Woods winning the decision on points. Turton earned a second-place state finish with an impressive career record of 52-16.
Four Raider wrestlers earned a third-place finish at the state meet. Tyler Kennedy defeated a Westfield opponent to earn second runner-up honors while Jordan Grinnell took the same title with a victory over a Mill Springs challenger. Brandon Revell defeated another Mill Springs opponent for a third-place finish and Morgan Youngdale earned his spot on the dais with a victory over a Windsor Academy athlete.
Billy Calcutt and Stephen Barnes each earned a fifth-place finish at the meet. Reagan Trollinger finished in sixth place.
This was the second straight year that Southland has hosted the tournament at GSW. Southland athletic director, Clint Humphrey, acted as host and meet director as spectators filled the Storm Dome for two days of wrestling action. Coaches Nick McGehee and JR Jones assisted throughout the season with the program. 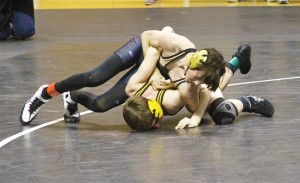 Michael Murray/Americus Times-Recorder:
Cole Landreth prepares to pin his Bulloch Academy opponent during the final round of the GISA state wrestling tournament in Americus on Feb. 6. Landreth won the championship match with a pin to secure the state title.

AMERICUS — The 2016 TripAdvisor Travelers’ Choice Award winners have been announced, and, for the eighth time, Americus Garden Inn... read more