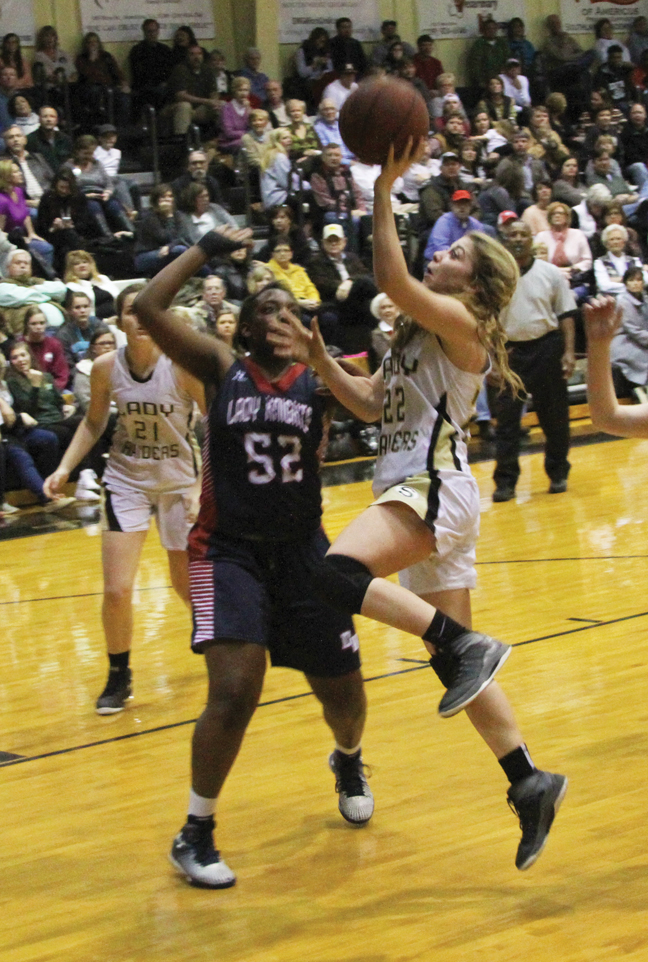 Michael Murray/Americus Times-Recorder: Southland Academy senior, Chris Shattles, tosses in a lay-up from the paint during the Lady Raiders’ Feb. 9 contest. Shattles led the team to victory with 17 points in the match.

AMERICUS – As GISA region 3-IAAA regular season basketball competition drew near its end, the Southland Academy Raiders and Lady Raiders hosted Deerfield-Windsor for one final bout on Feb. 9.
The Lady Raiders kicked off the afternoon’s action, dealing a 44-41 blow to the Lady Knights after a long, up-and-down bout. The Raiders then hit the court to take on Deerfield-Windsor’s boys, suffering a 49-41 loss after a hard-fought match.
During half-time of the boy’s game, the Raiders’ C-team, composed of seventh and eighth-graders, was recognized for their undefeated record on the court through the 2015-16 season. The Southland C-team finished first in the region after defeating Tiftarea in the title match
The Lady Raiders came out strong in the afternoon opener.
Having previously taken a 59-57 overtime loss to the Lady Knights in a Jan. 19 contest, Southland’s girls hit the court determined to even the score in the teams’ final showdown of the regular season.
Deerfield came out fighting after the tip-off, and proved to the Lady Raiders that they were in for a tough battle. By the end of the first frame, the Lady Knights had amassed a 11-6 advantage over their hosts. Southland’s girls, however, refused to give in and made a hard offensive push in the second period, holding the visitors to only six points and tossing 19 into their own goal to reverse the damage and take a 25-17 lead into the second half.
Deerfield responded in kind when play resumed, clawing their way back into contention and, finally, slipping past the Lady Raiders near the three-minute mark of the third frame. By the end of the third quarter, the Lady Knights had pulled ahead 33-29.
Deerfield opened the final period with a pair of free throws to expand their advantage to six points before Southland’s Chris Shattles broke the Lady Raiders’ silence with a breakthrough lay-up. Moments later, Kendall Kirkland added to the team’s momentum by stealing the ball and dishing out an assist to Shattles, who was waiting under the bucket.
A pair of spot-on free throws from Kathleen Kinslow brought the Lady Raiders within one point at the 6:00 mark, but Deerfield quickly negated that attempted comeback with a perimeter shot. The teams continued to trade baskets over the next three minutes before Southland’s Cassi Bass drained a long three-pointer from the center to give the Lady Raiders their first lead in nearly eight minutes of playing time (41-40).
A Deerfield shooter equalized the score with a free throw and the tally remained even until there were only 30 seconds left on the clock.
With the match looking like it could easily go into overtime, Shattles managed to draw a foul that landed her at the charity stripe with 25 seconds left to play. Shattles deftly sank her free throw to put the home team up again.
Ten seconds later, a Deerfield shooter saw the chance to neutralize the threat from the free throw line. The home crowd erupted in a deafening roar as the shot bounced off the rim, leaving the Lady Raiders ahead.
Ten seconds later, Kinslow put the final nail in the coffin for Deerfield, calmly sinking a pair of free throws and putting the game out of reach.
Shattles set the pace for the Lady Raiders in the contest, tossing in 17 points. She led the team on the boards as well, with eight rebounds, also contributing five steals. Kinslow joined her in the double digit scoring, adding another 13 points.
Sydney Hayes brought down seven rebounds for Southland while Macy Williams grabbed another six. Kirkland pulled in four.
Williams contributed a pair of blocks for the Southland cause.
Following this exciting victory, the Raiders hit the court to take on the Knights.
Deerfield opened the match with a 9-2 scoring spree, broken only by a Jamaal Rice lay-up.
Five minutes into the first frame, the Raiders’ shooters began to heat up, sparked by a long three-pointer from Harrison Bell. Chandler Studdard immediately followed with a lay-up  and Rice capped off the run with a free throw to bring the Raiders within one point.
At the 1:30 mark, Alex Roach hit a lay-up to tie the score 12-12 after Bell dropped in a perimeter shot, assisted by Parker Weldon. Brody Shattles then tossed in a hook shot from the key to give the Raiders 14 points going into the second period. The Southland boys trailed by one point.
Deerfield gained a slight lead early in the second, but the threat was neutralized by a lay-up and a trey from Landon Henson, coupled with a fast break lay-up and one from Rice to tie the score 22-22. With one minute left in the half, Deerfield sunk a three-pointer to take a 25-22 lead into the break.
Deerfield proceeded to pad their advantage over the duration of the third period, with the Raiders trailing by 14 points at the onset of the final frame. Southland outscored the Knights 14-10 in the fourth period, but their third period deficit proved to be too much to overcome, sentencing the team to the 49-41 loss.
Rice contributed 17 points for the Raiders in the contest. Bell hit a pair of three-pointers on his way to eight points for the Raiders and Henson tossed in seven.
The Raiders and Lady Raiders returned to action in Americus on Feb. 12, hosting the Valwood Valiants and Lady Valiants for their final region contests before the playoffs. The results of these contests were not available at press time.