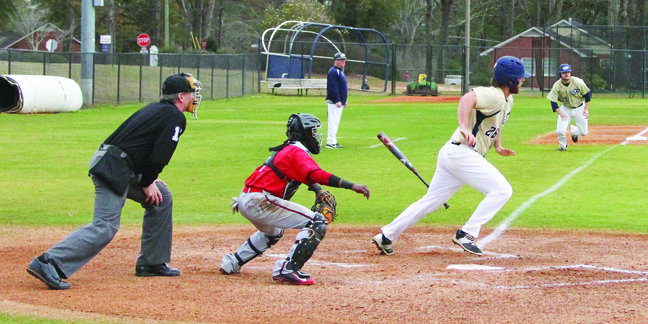 Michael Murray/Americus Times-Recorder: GSW’s Davey King takes off for first base as Brett Burgess heads home during the Hurricanes’ season opener in Americus. King and Burgess each brought in two RBIs and crossed the plate once in the ‘Canes on Feb. 10 victory over Middle Georgia State University.

Feb. 10 was a big day for Georgia Southwestern State University’s (GSW) sports programs. Between the baseball diamond, the softball field, and the basketball court, the school’s teams participated in five different matches all over the state, winning every one.
The Lady Hurricanes’ softball team kicked off the action, hosting the Fort Valley State Lady Wildcats in a double header at Lady ‘Cane field.
Propelled by the team’s first home run of the season off the bat of GSW pitcher, Hayley Tierce, the Lady ‘Canes overcame an early one-run deficit to win the match 10-1 in only five innings.
GSW’s finished with 14 hits, 10 runs and 10 RBIs.
Julia Dunlap hit a double to contribute to the Lady ‘Canes’ early win as well. Pierce brought in three runners on two hits in the match while Mikela Barlow and Joselyn Martin each added a pair of RBIs.
Tierce (2-0) pitched three innings, had four hits, one run, walked five and struck out three. Brittany Childs pitched two innings, gave up two hits, walked one and struck out one.
A nine-run explosion in the first inning carried the Lady ‘Canes to a 15-0 win in five innings over the Lady Wildcats in game two of the series.
Americus native, Ella Hawkins started GSW’s streak off by stealing home before Barlow, Tierce, Martin, Nikki Graham, and Bri Lewis all came in on wild pitches. Graysen Sanders scored off a sacrifice fly from another Americus native, Rebekah Davis. Hawkins and Barlow both scored again later in the match.
Game two also ended in five innings and the Lady ‘Canes finished with 10 hits, 15 runs and two RBIs.
Meanwhile, in Cochran, the Hurricanes baseball team went on the road to take on the Middle Georgia State Knights.
The Hurricanes fell behind early, but managed to claw their way out of a seven-run hole in the seventh inning, narrowing the deficit to two points.
Brett Burgess, Davey King, and Devyn Newberry knocked in a run apiece before Evan Alderman capped off the seventh inning with a two-run single.
The ‘Canes crossed the plate four more times in the ninth stanza to win the match 12-10.
GSW used five different pitchers in the game. Reliever Coty Graham (1-0) picked up his first win of the season after throwing two scoreless innings. Graham walked one, allowed one hit and struck out two batters. Kyle Spinks faced five batters in a scoreless ninth to earn his first save.
The victory leaves the ‘Canes record at 5-0 so far on the season. This marks the first time that GSW has been undefeated through five games since joining the NCAA in 2006-07.
Later that afternoon, the Lady hurricanes basketball team  hit the Road for Dahlonega to face the University of North Georgia (UNG). The Lady ‘Canes earned a 72-63 victory in the conference match-up, bringing the team’s Peach Belt Conference (PBC) record to 4-11. The GSW women are currently 10-12 overall.
Ja’Quasha Sesler led the Lady ‘Canes to victory in the match with 11 points. Khayla Owens set the pace for the team on the boards with 12 rebounds.
Following the Lady Hurricanes’ PBC victory, the GSW men’s basketball team took the court for a brawl with the UNG Nighthawks. The Hurricanes bested the Nighthawks 73-78 in the road match.
GSW had four of its five starters score in double digits.
Adam Thoseby finished with a game-high 24 points. Brandon Price made 9 of 12 shots and finished with 20 points and seven assists. Chandler Thomas posted his second double double of the season, finishing with 14 points and a game-high 10 rebounds. Jure Gunjina added another 10 points.
With the win, the Hurricanes improved their record to 9-13 overall and 5-10 in the PBC.
The Lady Hurricanes softball team will return to action this weekend, playing in the Palm Beach Atlantic tournament in West Palm Beach, FL. They play Florida Tech and Barry University on Feb. 13.
GSW’s baseball team will return to Americus to host Montreat College in a three-game, non-conference series starting with a doubleheader on Feb. 13.
The Hurricanes and Lady ‘Canes basketball teams are home on Feb. 13, hosting Francis Marion in the afternoon at the Storm Dome.