Lady Panthers hang onto no. 1 spot; Panthers wrap up season 15-9 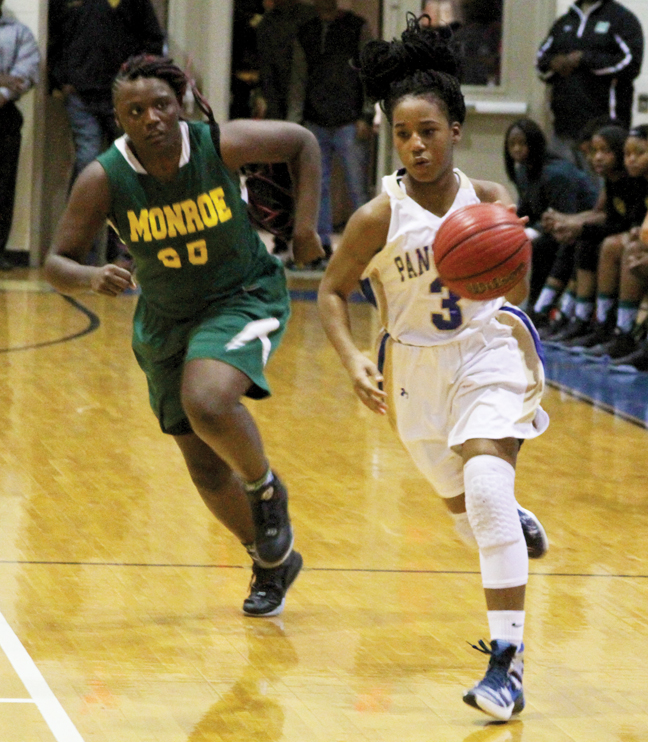 Michael Murray/Americus Times-Recorder: Jykiera Long drives down the court past a Monroe defender during the Lady Panthers’ Feb. 11 region 1-AAAA semifinal match. Long contributed 18 points to the ASHS victory over the Lady Tornadoes, hitting four three-pointers along the way.

AMERICUS – The currently undefeated Americus-Sumter High School Lady Panthers have recently received some great news.
According to two separate polls, conducted by the Atlanta Journal-Constitution (AJC) and Maxpreps.com, the ASHS girls are situated squarely at the top of the state rankings with their 25-1 record.
The poll conducted by the AJC shows the Lady Panthers at the top of the state pile, ahead of Buford (20-4), Marist (23-2), Veterans (21-4), and Jonesboro (19-4).
The AJC poll was released on Feb. 7 and does not reflect these teams’ playoff matches.
The poll conducted by Maxpreps.com paints a slightly different picture, however. While Americus-Sumter still occupies the top spot, the poll shows Marist in second place, followed by Jonesboro, Buford, and Northwest Whitfield.
The Lady Panthers demonstrated the determination that landed the team in the number-one spot during the region playoffs this week in Americus.
The ASHS girls took the court for the first round of playoffs on Feb. 9, devastating the Cairo Lady Syrupmakers by a 66-30 margin to earn a place in the region 1-AAAA semifinals.
The ASHS girls returned to the court on Feb. 11 to take on the Monroe Lady tornadoes in the semifinal round of the playoffs.
Propelled by a quartet of precise three-pointers from Jykiera Long and another impressive performance by Atyanna Gaulden, among others, the Lady Panthers solidified their spot in the region championship with a 64-47 victory over the Monroe Lady Tornadoes.
The Lady Panthers returned to the Panther Den on Feb. 12, battling the Westover Lady Patriots for the region crown. The results of this contest were not available at press time. Please visit www.americustimesrecorder.com for the championship results.
The semifinal round of the playoffs saw the Lady Panthers take off on a 7-2 run to open the contest.
Kayla Howard opened he game’s scoring with a lay-up, followed by another from Jakala Stevenson. Long dropped in the first of her treys to give the Lady Panthers a five-point pad before Monroe broke the streak with a free throw. At this point, Lady Panther sharp shooters, Gaulden and Timia Swanson entered the fray to lend their expertise to the match. Aided by a series of deft steals, the ASHS girls added another eight points, capped of by a lay-up from A’bralor Mercer in the first period.
The ASHS girls continued to pull ahead in the second frame, which was highlighted by a Stevens-assisted fast break lay-up from Gaulden and a buzzer-beating three-pointer from near half-court by Long.
With a 36-23 lead at the half, the Lady Panthers never looked back, eventually ending the Lady Tornadoes’ season with a 64-47 decision.
Gaulden set the pace for the Lady Panthers in the contest, nabbing seven steals on her way to 19 points. Long followed close behind, dialing in from beyond the arc four times as she pressed on for 18 points. Swanson hit double digits as well, contributing 12 points and three steals. Stevenson tossed in six points, dished out one assist, and snagged two steals. Howard added another six points.
In ASHS boys’ action, the Panthers traveled to Albany on Feb. 9 to face the Westover Patriots for the right to advance to the second round of the region 1-AAAA playoffs. With the team down three players due to injury, the Panthers’ season came to a close with a 59-54 loss to the Patriots after a hard-fought battle.
Asked how he feels about the Panthers’ performance on the court this season, Panther head coach, Michael Hoffpauir, told the Times-Recorder, “I think that the season went as expected. I knew that we were kind of young, especially coming from the summer season… We had costly turnovers [early in the season] and it was something that we couldn’t get over. We did turn a corner and went on to do some great things. We made a good run at the playoffs. We just fell a little short due to injuries.”
The ASHS boys had eight seniors on the team’s 22-man roster this season. Team members, Daylon Leary, Scottie Sheffield, Fred Bryant, Aiden Sanford, Albert Davis, Ben Walters, Jaelan Williams, and Brandon Dennard will be graduating this year.
On the team’s soon-to-be graduates, Hoffpauir said, “When I came in [as head coach], it was about molding the program to how I envisioned it. Those guys welcomed me with open arms. A lot of them, I gave experience on the JV level as juniors, and they stepped up and had helped. Some of them also played varsity last year. I’m very fond of those guys. They’ve worked hard and done everything that I’ve asked them to do. I’m very proud of them and I wish them well in their future endeavors.”
Fortunately, for the Panthers, the future looks bright. 17 members of Sumter County Middle School’s (SCMS) Panthers basketball team will be moving up to the high school level for the 2016-17 season. The SCMS Panthers recently swept the region tournament, turning in an undefeated record after 14 contests in the 2015-16 season.
Asked about the future of ASHS basketball, Hoffpauir said, “Our strength is in our younger guys. We have some sophomores this year that will be moving up as juniors. We also have some freshmen that made it to the championship game… They’re bringing a winning pedigree to the table and they’ve done a good job of learning the game. Coach Shelton and Coach Jim Wright have installed things in these players that we also work on at the varsity level. We have our feeder system working. Hopefully, that will translate to a continuous winning tradition here.”