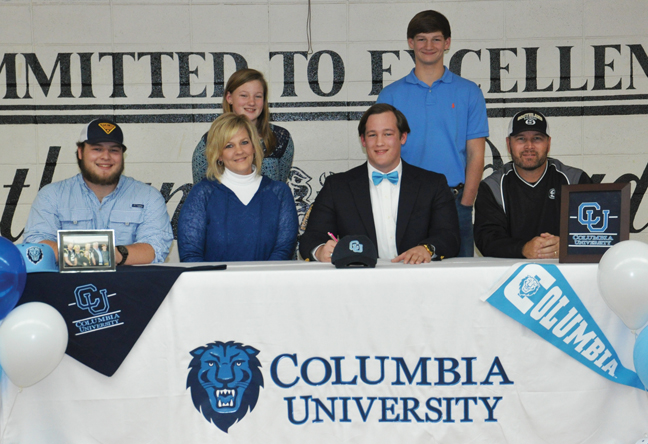 AMERICUS – Southland Academy multi-sport athlete, Parker Weldon, took the first step on a long, exciting journey on Feb. 8 in Americus, signing a national letter of intent to join the Columbia Lions on the gridiron following graduation.
Weldon, a 6’2”, 270-pound defensive end, sat down with the Times-Recorder prior to a signing ceremony at Southland to discuss his productive career with the Raiders and his upcoming plans.
Asked how he was able to grab the attention of Columbia University, Weldon told the Times-Recorder, “Back in the summer, one of the coaches contacted me, asking about my grades and stuff. We started talking and I told him about my grades. I sent him film [of me playing football] and my resume.”
“I was up [in the Northeast] going to different camps,” he continued. “I was traveling with my mom up there for four days and I actually ended up skipping one of the camps and we stopped by Columbia. I met the head coach and other members the coaching staff. I liked them a lot. I got to see the school. I got to see the sports facilities. That’s when I really started getting serious. About a month later, I got an offer from them… [The coach] told me that, at the last coaches’ meeting they had, they decided to make the offer.”
Weldon made a verbal commitment to the Ivy League institution on the spot.
In his career with the Raiders, Weldon has played the positions of defensive end, linebacker, and tight end. In his freshman and sophomore years, he was named to the All-Area team. In his junior year, he was named to the All-Region team. As a senior, Weldon was named captain of the football team.
On Weldon’s contributions to the team during his career on the gridiron at Southland, Raider head coach, Rod Murray, told the Times-Recorder, “He’s been a great part of what we’ve been doing here. He comes from a football-playing family. He does a great job in the locker room . He’s a great leader. He practices every day and he practices hard… He’s a great kid and we’re very excited for him.”
Weldon was signed as a defensive end. “If I continue to gain weight, they’ll move me down to defensive tackle, but they recruited me as a defensive end… I’ll be on the line either way, I think.” he said.
On his time with the Raiders, Weldon has nothing but fond memories. “I went through two head coaches,” he said. “I really enjoy and love them both. I’ve really been blessed to have this coaching staff around me like I do. They’re a great bunch of guys.”
Weldon also lent his talents to the Raiders on the baseball diamond as a junior and on the basketball court as a freshman and sophomore.
Weldon stated that he intends to major in pre-med during his time at Columbia. “I’m going to study medicine up there. That’s the only thing that I can see myself doing. It’s what I’ve always wanted to do.”
Asked what he is most looking forward to about his upcoming college experience, Weldon said, “The education. That’s what I’m most excited about. I wanted to use football get me into a really good academic school. That is a goal of mine. I’ve always wanted to go to an Ivy League school… I love football and I’m really going to play hard, but… I’ll be playing football for four years and my education will last a lifetime.”
Weldon was sidelined with a knee injury through the majority of this past season with the Raiders. “I only got to play three quarters in my senior year,” he said.
The injury certainly did not dampen his enthusiasm for Southland sports, however. He can be found on the sidelines of nearly any school sporting event, cheering on his classmates.
He told the Times-Recorder that, between working at Carter’s Fried Chicken, studying, and training for sports, he does not have much spare time. He said that, when he does get free time, he enjoys spending it with his friends.