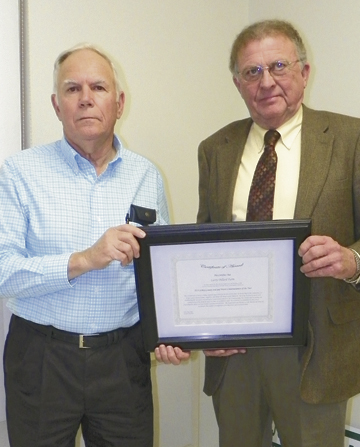 From left are Larry Dillard and Chairman Guy Beard.

DAWSON — The Lower Chattahoochee River Soil and Water Conservation District board of supervisors and its local sponsors held the annual Conservationist of the Year banquet on Jan. 19 at the USDA Service Center in Dawson. Larry Dillard Farm is this year’s Conservationist of the Year winner for Schley County .It is owned and operated by Larry Dillard. Dillard grew up working on his family farm, and he currently has 85 head of cattle on 295 acres. Along with cattle, he has around 15 acres of planted loblolly pines which were planted in the ‘80s through a program with NRCS. He also utilizes grassed waterways and has been working on the installation of permanent fencing for his cattle.
Dillard and his wife Ann were married in 1961. They have two daughters, Laurie and Denice, a son Randy, eight grandchildren and one great-grandchild. After marriage, Dillard went to work at Sumter EMC in Americus for 46 years, and worked part-time on the farm. The Dillards attend Concord United Methodist Church in Sumter County, and are both actively involved on various committees on the Ellaville-Schley County Historical Society.
This award is given to the outstanding conservationists in the nine surrounding counties that represent the Lower Chattahoochee River Soil & Water Conservation District. Chairman Guy Beard of Randolph County preceded the evening program while Luke Crosson, Regional Representative for the Georgia Soil & Water Conservation Commission, recognized the Conservationist of the Year winners.
Additional winners included; Joel Durham Farm of Clay County, Trent Bone from Haley Byne Farms of Lee County, Gideons Farm of Quitman County, Rodney Jackson Farm of Randolph County, W. C. Bradley Farm of Stewart County, Charles W. Clark of Sumter County, Bill Newman Farm of Terrell County, and J.B. Jones Farms of Webster County. It is through these conservationists’ efforts that natural resources are preserved for future generations.
The Lower Chattahoochee River Soil & Water Conservation District was organized on July 17, 1939, following the infamous “Dust Bowl.” The nine counties that represent the District are Clay, Lee, Quitman, Randolph, Schley, Stewart, Sumter, Terrell, and Webster. The goal of Soil and Water Conservation Districts is to assist people and communities in the care of the natural resources in their area. Conservation Districts offer technical, educational and financial assistance to private landowners. Georgia has 40 soil and water conservation districts and 370 Soil and Water Conservation District supervisors. Some districts include only one county, while other districts include two or more counties within their boundary. Each county in Georgia is represented by at least two district supervisors, one elected for a four-year term and one appointed to a two-year term. Representing Schley County is Supervisor Burt Strange.