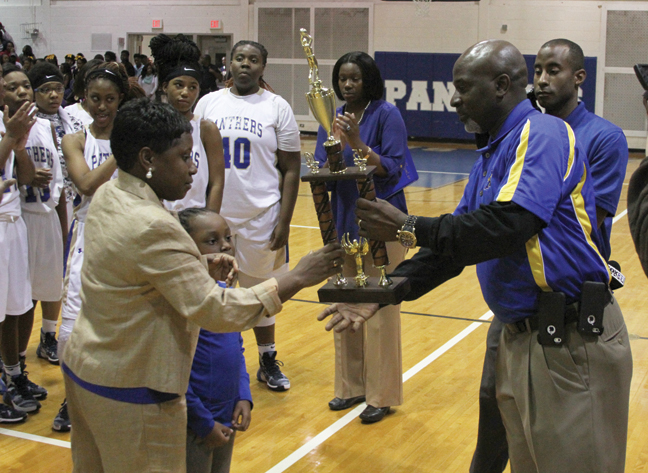 AMERICUS – The Americus-Sumter High School (ASHS) Lady Panthers capped off the region playoffs on Feb. 12 in Americus, solidifying their number-one spot in region 1-AAAA competition with a 26-1 record on the season to date. The ASHS girls earned their place at the top with a 69-62 thrashing of the Westover Lady Patriots in Americus.
With yet another win under their belts and the number-one state ranking, the Lady Panthers now set their sights on an even larger prize, the state crown. The state playoffs kicked off in Americus on Feb. 16, with the Lady Panthers taking on the Spalding Lady Jaguars at 6:00 p.m. in the Panther Den for the first round. The results of this contest were not available at press time.
The winner of this test will move on to the second round, scheduled to take place on Feb. 19.
The Lady Panthers pulled ahead early in the region championship, with Kayla Howard opening the scoring with a lay-up that sparked a 10-2 run for the home team. Timia Swanson immediately followed with a pair of buckets, one of which was assisted by Atyanna Gaulden. Gaulden and Jakala Stevenson tossed in baskets of their own, with Jykiera Long assisting in one.
Amber Hicks joined the action for a fast break lay-up before Long capped off the frame with a pair of her signature long three-pointers. The Lady Panthers remained ahead 20-7 heading into the second period.
The ASHS girls continued to pull ahead in the second stanza, paced by several key shots from Swanson. Stevenson, Long, and Myia Crawford contributed points as well.
The ASHS girls continued this momentum after the half-time break, with Howard stepping up as the main contributor. Gaulden was assisted in lay-ups by Hicks and Long during this period after connecting on her sole three-pointer of the match. The Lady Panthers entered the final frame with a 17-point lead, 53-36.
The Lady Patriots posted their most productive quarter of the match in the fourth, making a hard, offensive push to outscore their hosts 26-16 over the final eight minutes. The visitors’ efforts proved to be in vain, however, as the team would prove unable to overcome their early deficit. Swanson, Stevenson, Long, and Howard each tossed in buckets for the Lady Panthers in the final frame to leave the ASHS girls with a comfortable 69-62 victory.
Four Lady Panthers contributed double-digit scores to the contest. Swanson set the pace for the team with 20 points while Howard followed close behind with 15. Gaulden connected on 86 percent of her attempts on her way to 13 points for the ASHS cause and Long led the team from beyond the arc with a trio of three-pointers on her way to 11 points.
Swanson led the team on the boards as well, narrowly missing a double double with nine rebounds. Howard puled down seven rebounds in the match. Gaulden dished out six assists in the contest, followed closely by Long with four. Hicks and Howard each dished out three.
Long also did her part on the defensive side of the ball, gaining three steals. Gaulden and Hicks each contributed two.
Please visit www.americustimesrecorder.com for the results of he Lady Panthers’ Feb. 16 state playoff match.