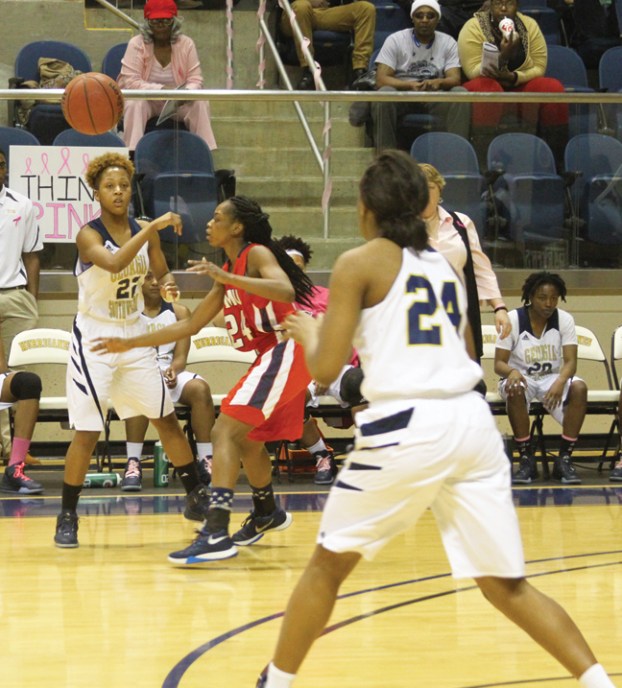 Michael Murray/Americus Times-Recorder: Jasmine McSwain (22) fires off a pass to Chanice Whitton (24) during the Lady ‘Canes’ Feb. 13 match. McSwain led the Lady ‘Canes to victory over Francis Marion with 19 points.

AMERICUS – Senior forward, Adam Thoseby, drained six of seven from three-point range and finished with a game-high 31 points to lead Georgia Southwestern past Francis Marion University (FMU), 86-82, in the Storm Dome on Feb. 13.
Similarly, junior guard, Jasmine McSwain, made five of six three-pointers to help the Lady ‘Canes earn a 65-61 victory over FMU that same afternoon.
With the win, the Hurricanes improve their record to 10-13 overall and 6-10 in the Peach Belt Conference (PBC) while FMU, fighting for one of the final two spots out of the East Division in the PBC Tournament, fell to 15-10, 7-9 in conference play.
The win improves the Lady ‘Canes’ record to 11-12 overall and 5-11 in the PBC. FMU’s ladies move to 18-7 overall and 9-7 in the PBC.
In men’s action, the first half of the match was a back-and-forth affair with three ties and 14 lead changes. Thoseby scored the Hurricanes’ final 10 points of the opening session to help Southwestern take a 38-35 lead into the locker room.
The second half played out much like the first as neither side could get any separation. Damien Leonard converted a four-point play with 7:54 remaining and followed it up with a basket to give GSW its largest lead of the afternoon, 73-64, but FMU answered with an 11-2 run to tie the game at the four-minute mark.
FMU pulled ahead with 1:30 left, but Thoseby took the lead back with a pair of free throws and Chandler Thomas made the decisive basket with 51 seconds on the clock, converting it into a three-point play.
Leonard finished with 17 points, six rebounds, and four assists while Thomas added 15 points and eight rebounds.
In women’s action, the Lady Patriots took an early lead, making the first two baskets of the game before the Lady ‘Canes turned it around with an eight point streak. Va’Queshia Hall sparked the run with a jump shot and Yvonna Dunkley and Kris Beckham made consecutive three-pointers.
Throughout the rest of the initial frame, FMU threatened twice, but McSwain responded with treys to keep the Lady Patriots in the red.
McSwain made her third three-pointer seconds into the second quarter and the Lady ‘Canes continued to push ahead, taking a 27-22 lead into half-time.
FMU scored four points in the opening minute of the third quarter to come within one point of GSW and tied the game 32-32 with 5:33 remaining. Chanice Whitton and Whitney Young quickly built a five-point pad and McSwain opened it to seven with another long shot from beyond the arc.
McSwain opened the fourth quarter with yet another trey and the Lady ‘Canes continued to press on, eventually taking the four-point win.
McSwain led GSW with 19 points. Hall had 12 while Holden led the team on the boards with eight rebounds.
GSW’s men and women make their final road trip of the season on Feb. 17, traveling to Young Harris to take on Young Harris College.

Lady Panthers progress to round two of state playoffs