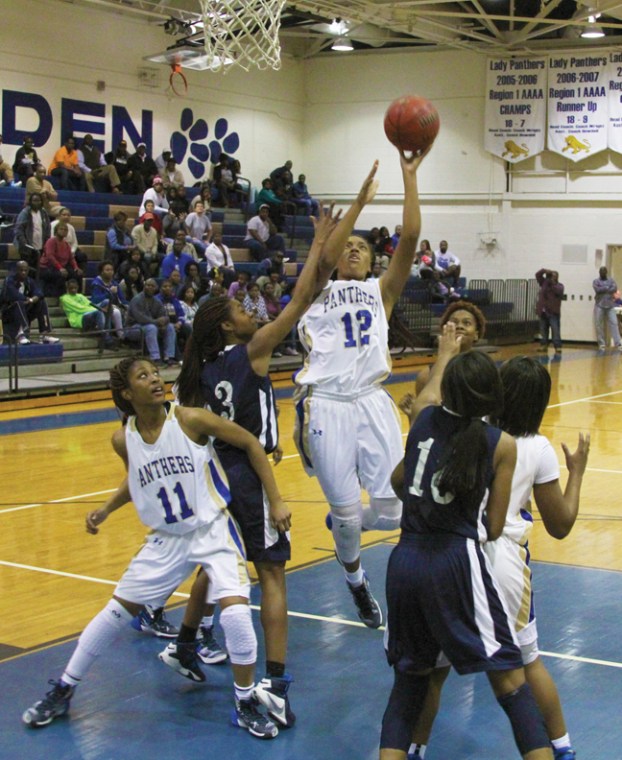 Michael Murray/Americus Times-Recorder: Kayla Howard (12) tosses in a lay-up during the third quarter of the Panthers’ Feb. 16 contest in Americus. Howard contributed 15 points to the ASHS victory in that game.

Lady Panthers roll past Spalding to round two of state playoffs

AMERICUS – The Americus-Sumter High School Lady Panthers have done it again, taking down the Spalding Lady Jaguars in the first round of the Class AAAA playoffs in Americus by a margin of 51-44 on Feb. 16 to earn a spot in the second round of the state tournament.
With the win, the Lady Panthers improved their already impressive record to 27-1 on the 2015-16 season.
The first quarter of the match-up was, uncharacteristically, a low-scoring affair for the Lady Panthers. In a defensive slugfest, the two scrappy teams traded possessions several times before Spalding guard, Aniaya Jester, broke the scoring seal at the 5:30 mark with a free throw. The Lady Jags’ Ashanti Reid then tossed in another lay-up before ASHS’ Myia Crawford made the board with a Jakala Stevenson-assisted lay-up. That bucket would prove to be the only score that the Lady Panthers would post in the first frame and Spalding eventually took a 5-2 lead into the second quarter.
ASHS forward, Kayla Howard, fired her way into the second period, opening the frame with a lay-up and continuing on a one-woman scoring spree that lasted the majority of the second frame. Howard went on to post nine points for the Lady Panthers over the next six minutes before eventually tying the score 11-11. Teammate, Atyanna Gaulden, then saw a chance to get in on the action with 2:00 left in the half, as she dodged Spalding defenders all the way to the bucket and laid one up. Gaulden followed with a trio of connections from the charity stripe to give the Lady Panthers a 16-14 advantage at half-time.
The Lady Jaguars would go on to tie the score twice more, 16-16 and 18-18 before ASHS long-range sniper, Jykiera Long, put the ASHS girls up for good with a pair of three-pointers from opposite sides of the floor. These long-range connections were split by a converted rebound from ASHS’ Zari Mays and followed immediately by a perimeter shot from Amber Hicks.
By the end of the third frame, the Lady Panthers had built up a five-point pad, 30-25.
The ASHS girls continued the offensive onslaught in the final stanza, outscoring the visitors 23-19, propelled by contributions from Howard, Gaulden, Stevenson, and Hicks.
At the final buzzer, the Lady Panthers left the floor with another solid victory under their belts and began preparations for the second round of the tournament, scheduled for Feb. 19 in Americus.
Gaulden led the charge for the Lady Panthers, grabbing two steals and connecting on 10 free throws as she made her way to 22 points contributed to the ASHS cause. Howard followed close behind, scoring nine points in the second quarter alone and ending up with 15 points at the conclusion of the match. Howard also contributed one steal, one assist, and one block to the contest.
Long brought up the rear, leading the team from beyond the arc with a pair of treys to add another six points.
The Lady Panthers returned to their home court in Americus on Feb. 19 to defend their record against the Lady War Eagles of Woodward Academy, who defeated Madison County to earn a spot in the second round of the state playoffs. The results of this contest were not available at press time.