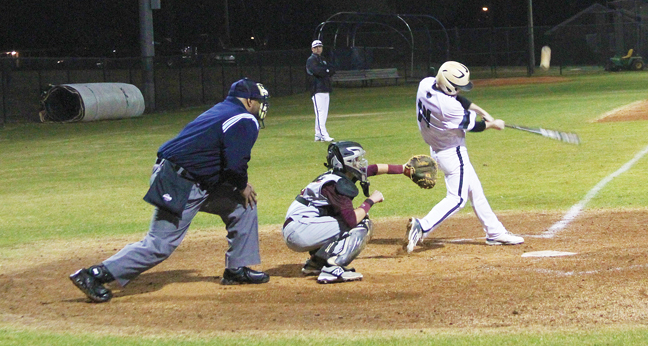 Michael Murray/Americus Times-Recorder: Schley’s Blake Howell blasts the Wildcats’ first hit of the game in the second inning of the team’s Feb. 18 match-up against Perry in Americus.

AMERICUS – The Schley County High School Wildcats baseball team headed down to Americus on Feb. 18 for their first match-up of the season against the Perry High School Panthers. After a tough back-and-forth match, the Wildcats, in defense of their 2015 state championship title, sparked a late rally in the sixth inning to roll past their competitors and snag a 12-5 win.
According to reports, Schley’s season opener was played on the campus of Georgia Southwestern State University due to renovations currently taking place in their home diamond in Ellaville.
The Panthers pulled ahead early in the curtain-raiser, earning one run and bringing in another on an error in the first frame. Perry’s pitcher held the Wildcats to only four batters in the bottom of the inning and the Wildcats, with Brett Usry on the mound, responded in as they went into the second.
The Wildcats saw their chance to pull ahead in the bottom of the second inning after Chase Patrick drew a walk and Blake Howell knocked a single into centerfield, allowing Patrick to advance to third. Another walk from Jarrod Wall loaded the bases for the Wildcats and set the stage for a comeback rally.
With the bases loaded, Reid Ragsdale slugged a sacrifice fly into left field, allowing Patrick to come sliding home. Next up to the plate for the Wildcats was Josh Hutchens, who laid a bunt just short of Perry’s pitcher. The Panthers’ attempt to pick off the runner at first sailed past the visitors’ first baseman, allowing Howell and Jordan Hall (pinch-running for Wall) to cross the plate and put the Wildcats ahead 3-2.
Perry went on to add a pair of runs in the top of the third and the Wildcats equalized the score at the bottom of the frame. The Wildcats would go on to add another run in both the fourth and fifth innings, eventually taking a 6-5 lead into the sixth.
From there, the Wildcats put the game out of reach with an explosive sixth-inning rally that left the team ahead 12-5 heading into the final stanza. Schley’s powerful defense quickly dispatched Perry’s batters as they approached the plate to seal the seven-run victory.
Schley saw four different pitchers, Patrick, Howell, Usry, and Michael Leeder, take the mound during the contest. Patrick and Usry each struck out four batters.
Patrick and Josh Hutchens each contributed a pair of hits to the win, with Patrick adding a pair of RBIs as well. Usry brought in two RBIs and Hutchens plated one.
In total, Perry gained six hits in the match, while the Wildcats connected on five.
The Wildcats return to action in Ellaville on Feb. 22, hosting Webster County. The team’s home stretch will continue on Feb. 24, as the Wildcats host Mt. de Sales Academy.