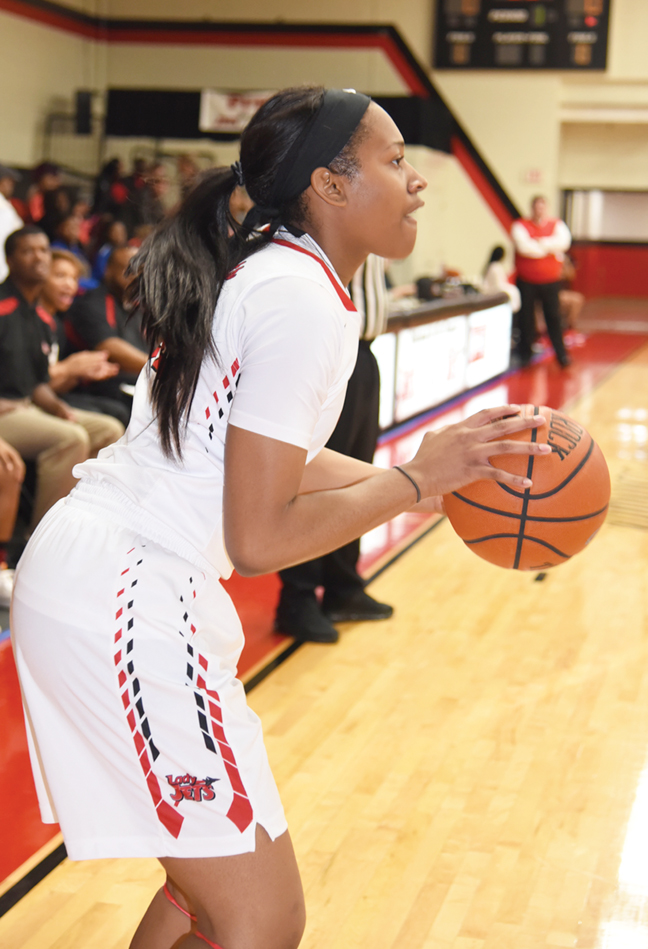 AMERICUS – The South Georgia Technical College (SGTC) Jets and Lady Jets sophomores ruled the court on Feb. 17 when they swept the Albany Tech Titans and Lady Titans on Sophomore Night. The 78–46 victory for the Lady Jets allowed them to capture the Georgia Collegiate Athletic Association (GCAA) regular season title. The Jets improved their position with an 80–72 overtime win over Albany Tech.
“We are excited to finish the regular season as the GCAA champions,” said SGTC Athletic Director and Lady Jets head coach James Frey. “We don’t take winning 25 games in a regular season for granted. It’s a long tough season. I think the ladies worked really hard and remained focused and the hard work paid off. We played fast on offense last night and we really guarded the ball well. We were able to take them out of their offense and made things uncomfortable for them.”
As the GCAA champions, the Lady Jets will host the NJCAA Region XVII tournament first round on Feb. 23 in Americus.
SGTC will host the number-eight team in the first round of the tournament.
The top four teams will advance to the NJCAA Region XVII semi-finals which will be hosted at the highest remaining seed’s home court. If South Georgia Tech wins on Feb. 23, the semi-finals and finals will be held at the Hangar in Americus.
SGTC’s Cierra Bond was the leading scorer against Albany Tech with 30 points. Bond was the GCAA player of the week last week, and hit seven three point shots in 15 attempts. She also had eight rebounds and four assists. Molly Brown added 18 points, including four three point shots of her own. Brown also had five rebounds and four assists.
Jets head coach, Travis Garrett, was also pleased with his team’s performance that evening as they overcame a 14-point deficit to tie the game at 58–58 at the end of the regulation play and then captured the 80–72 overtime victory.
“I am so proud of my players because we found a way to win,” said Coach Garrett. “We have been so close in all of our conference games this season so it was good to finally get over the hump and win in overtime.”
Demario Beck led the Jets in scoring with 19 points and 18 rebounds. Corbyn Jackson helped the Jets with 13 points and six rebounds. Patrick Welch and Ricco Simmons stepped up to help clinch the victory. Welch had 14 points including three three-pointers and Simmons scored 13 points including nine of 10 free throws in the final minutes of the game.
The Jets wrapped up their GCAA regular season on Feb. 25 with an 80-72 victory over Albany Tech to move to 15–15 overall. The Jets are seeded seventh in the conference.
They will face the second-place South Georgia State College team in their final non-conference regular season match-up and could face them again in the first round of their region tournament action on March 2.