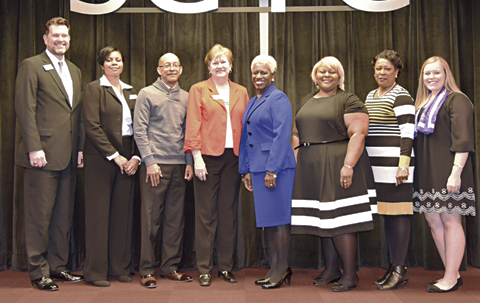 AMERICUS — Josephine Reed-Taylor, Ph.D., chief academic officer for the Technical College System of Georgia (TCSG), was the keynote speaker for the South Georgia Technical College (SGTC) annual African American History Month program. The theme for the program was “Every Great Dream Begins with a Dreamer.” The program was held Feb. 17 in the John M. Pope Industrial Technology Center on SGTC’s Americus campus.
Reed-Taylor spoke of her childhood on an Alabama farm between Selma and Montgomery, and how she was the first in her immediate family to attend and graduate college.
“Growing up, my parents worked several jobs each in order to help me get to college,” said Reed-Taylor, who earned her bachelor’s degree from Spelman College. While she was working toward her master’s degree, she explained, her mother went back and earned her GED.
“In spite of the racism and sexism I’ve faced in my career, I’ve been strengthened by the efforts of my parents and grandparents.” Her grandmother, who was a civil rights activist, was a particular inspiration to her.
“These important figures in African American history — Shirley Chisholm, Colin Powell, Barack Obama — their sacrifices have been an encouragement to me in my career,” she said, “and taught me not to let the negative experiences from achieving my career goals.”
“South Georgia Technical College is going to help its students learn great skills to become better world citizens,” Reed-Taylor continued. “All of us are a part of a solution to that divide — what keeps us apart from each other.”
She closed with a quote from Oprah Winfrey: “I am where I am because of the bridges that I crossed. Sojourner Truth was a bridge. Harriet Tubman was a bridge. Ida B. Wells was a bridge. Madame C.J. Walker was a bridge. Fannie Lou Hamer was a bridge.”
Reed-Taylor formerly served as the Deputy Commissioner for TCSG, the Georgia State Director for Adult Education, and the Senior Vice President for Academic and Student Affairs at Minneapolis Community and Technical College. Under her leadership as Deputy Commissioner of TCSG, the system converted from quarters to semesters, merged several colleges, and increased transfer and articulation agreements with the University System of Georgia and the Georgia Association of Independent Colleges. The system is a partner in Complete College Georgia, the Accelerating Opportunity Initiative for adult education students and other efforts to increase collaboration between K-12 and postsecondary education.
Reed-Taylor serves on the national board for the Jeremiah Program that focuses on reducing two-generational poverty, volunteers with a local program for homeless teens and young adults, is a member of Leadership Atlanta class of 2010, and is particularly interested in expanding educational access and employment opportunities for those underserved in the community. She holds a doctorate in educational administration from the University of Minnesota, a bachelor’s degree from Spelman College, and has completed post graduate work in educational leadership at Harvard University.
The Americus-Sumter High School Gospel Choir, led by Kalynn Partridge, performed “Chasing After You” and “Lord, I Know I’ve Been Changed.”
SGTC’s Instructor of the Year for 2016, Andrea Ingram, presided over the program.
“Thank you for being a bridge,” she said to Reed-Taylor, echoing her closing sentiments. SGTC Acting President Janice Davis recognized special guests, which included Reed-Taylor’s husband David Taylor, keyboardist Leonard Tyson, the Americus-Sumter High School Gospel choir and their director, and military veterans.
“Josephine is a very dear friend to South Georgia Tech and all the students within the Technical College System of Georgia,” said John Watford, Ed.D., SGTC vice president for Academic Affairs, who introduced Reed-Taylor.
Andrea Oates, Ed.D., Academic Dean, gave the invocation, and Phi Beta Lambda President Racarda Blackmon gave the Occasion. SGTC’s 2016 Georgia Occupational Award of Leadership (GOAL) winner, Ashley Rodgers, closed the program with the benediction.