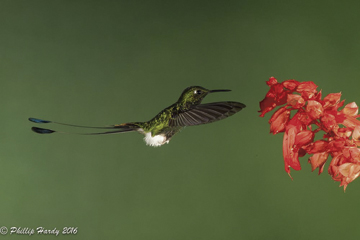 This Booted Racquettail was shot at Sachatamia Lodge near Mindo, Ecuador, using the multi-flash, set-up method. A red flower was cut, then placed where a sugar water feeder was. We removed the sugar water feeder and the bird instinctively came back to the location of the feeder.

Whether you call them Bee Martins, House Martins or by their more common name, Purple Martins, this member of the swallow family is truly an amazing long-distant migrant. When people ask me if I have a favorite bird, I answer that I actually have several “favorites.” One that ranks very high on the list is the Purple Martin. Allow me to tell you why.
About 15 years ago I built a martin hotel consisting of 14 apartments and mounted it on a metal pole in our Lake Jennifer backyard. I was counting on a few martins from my next-door neighbor’s colony to occupy a room or two. Sure enough, that first year I managed two or three pair to nest and raise young. Years later I added more martin hotels and gourds. Currently I have 18 apartments and 24 gourds.
Purple Martins are insectivores which probably explains their migration to 11 different South American countries during our winter months. They catch flying insects on the wing as well as drink and bathe while flying. It is rare to ever see a Purple Martin on the ground unless gathering nesting material like mud, leaves and pine needles or if they are eating grit.
Adult males that return early to their North American nesting sites are known as scouts. Contrary to popular belief, scouts don’t return to South America and tell the other martins it’s OK to come back. Scouts simply want the best nesting sites and arrive earlier than the immature and female birds do. My first scout this season arrived Jan. 31, 2016. Spring is just around the corner.
This highly social and gregarious bird enjoys roosting and nesting in colonies and the company of other martins. They have a high degree of site fidelity and actually prefer to be around man. East of the Rocky Mountains we enjoy one of three subspecies of Purple Martin that is almost totally dependent on man-made housing for nesting and raising young. Martin landlords, like myself, are eager to take an active role in raising young martins. All of my housing can be raised and lowered by a winch I mounted on the pole to facilitate nest checks and monitor the overall health of the birds.  I’ve even kept detailed notes concerning when the first eggs were laid, how many were laid and when the eggs hatch.
Several years ago I lowered my martin hotel to perform a nest check. When I opened the door a female martin was sitting quietly in the apartment. Gently I reached my hand inside and removed her. To my surprise she had bands on both legs. So I recorded the numbers and noted the color combination in hopes of finding out the history of this individual. Do you know that this individual bird returned to my colony year after year until one year she didn’t? I suppose she either died or moved on to another colony. According to The Sibley Guide to Bird Life and Behavior, among the oldest Purple Martins ever recorded was one that lived 13 years, 9 months!
Once I invited my octogenarian mother to assist me while performing a nest check in my martin colony. We methodically went from one housing unit to another. Mom held the clipboard, pencil and tally sheet while I examined the nests/contents then called out the results for her to record. What I did not know was that a rat snake had climbed the pole and made its way into one of the apartments where it dined on the pure white martin eggs and newly hatched young. Upon making this discovery, I invited my mother to take a look without divulging the snake’s presence to her. Big mistake on my part! She had to get fairly close to the box to see inside because of the bright sunshine. Mom threw the clipboard and pencil down then took off for the safety of my house calling for Jesus to save her. I never saw an 85-year-old move that fast and If she could have run she would have.
Native Americans attracted Purple Martins with gourds and enjoyed the pest management the birds provided. Today the martin is still enjoyed by many landlords from Florida to southern Canada. Purple Martins are also found in the desert southwest and the Pacific Northwest.
Perhaps the most magical attribute of the Purple Martin, to me, are the bird’s calls and song. In Pete Dunne’s Essential Field Guide Companion, Pete describes the sound of the martin as such: “The sound from a colony is a bubbling mix of exclamatory chirps and throaty churps, liquid trills, gurgles, burbles and periodic bleats — all with a pleasing musical quality.”
Now, I don’t pretend to know the differences in all those heretofore mentioned adjectives that aptly describe the bird’s vocabulary. But I do know that my wife and I love to sit in the swing by the backyard lake and observe their acrobatic flight and listen to their cheerful sounds in the spring and summer months. At times I have laughed out loud at their antics.
Purple Martins are a great bird to attract, not only for the flying and stinging insects they devour, but also for the fun of watching and observing their frolicking behavior.