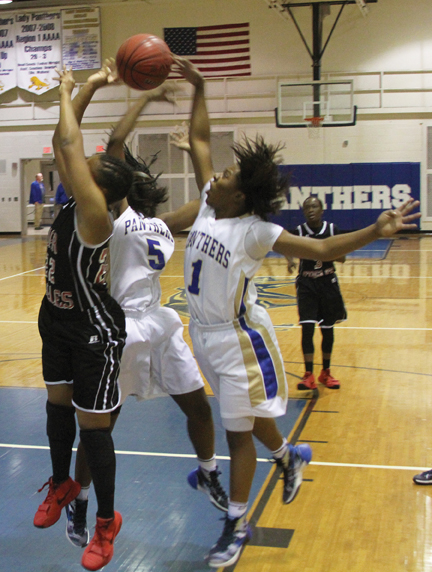 Michael Murray/Americus Times-Recorder: ASHS’ Atyanna Gaulden (1) and Timia Swanson (5) leap up at the same time to block a shooter in the Feb. 19 contest.

Lady Panthers roll over Woodward 64-28, punch ticket to quarterfinal round of state tournament

AMERICUS – The Americus-Sumter High School (ASHS) Lady Panthers hit the court for their final home contest of the season on Feb. 19 in Americus, rolling past the Woodward Academy Lady War Eagles of College Park.
Nearly every player on the Lady Panthers’ roster saw time on the court as the ASHS girls barreled their way to a 64-28 victory over their small, but determined opponents. Following the match, members of the Lady Panthers made a lap around the court, shaking the hands of their fans and thanking them for their support.
With the win, the Lady Panthers secured their spot in the quarterfinal round of the state playoffs, riding an 18-game winning streak to a 28-1 record on the season to date. The number-one ranked ASHS ladies will travel to Fort Valley State University on Feb. 26 to battle the Marist High School Lady War Eagles for the right to advance to the semifinal round of the tournament. Marist currently occupies the number-two spot in the state rankings with an impressive 28-2 record on the 2015-16 season and will undoubtedly serve up some of the most fierce competition that the Lady Panthers have seen on the court so far this year. Like the Lady Panthers, the Lady War Eagles are currently undefeated against Georgia teams. The Marist girls have amassed a 16-game winning streak, heading into their match-up against the Lady Panthers.
If the Lady Panthers prevail in their upcoming match, the team will return to the court the following afternoon for the semifinal round of the tournament. The championship game is scheduled to take place on March 3.
The Lady Panthers exploded onto the court during their Feb. 19 contest against Woodward. After ASHS’ Kayla Howard won the tip-off, she went on to open the scoring with a lay-up ten seconds into the action. Atyanna Gaulden and Amber Hicks each quickly added a pair of free throws and the game quickly got out of hand for the visiting Woodward crew, who found themselves on the short end of a 9-2 score with five minutes left in the initial period.
Timia Swanson soon tossed in a Hicks-assisted lay-up for the Lady Panthers and Jykiera Long capped off the first frame with a pair of three-pointers from the right side to leave the ASHS ahead 17-7 after the first eight minutes of play. Jakala Stevenson and Swanson each contributed steals in the first half of the second period after Gaulden added two more points to the ASHS lead with a lay-up.
The Lady War Eagles scrambled in the second frame, making an admirable effort to claw their way back into contention. By the four-minute mark, the Woodward girls had narrowed the gap to 19-13, but this proved to be as close to a comeback as the Lady Panthers would allow them to get. Sparked by a break-through lay-up by Gaulden, the home team went on a 10-0 run through the remainder of the period. Highlights of the run included a Gaulden-assisted lay-up by Dekeyvia Blackshear, a Long-assisted perimeter shot by Swanson, and an exciting tag-team block by Swanson and Gaulden to close the frame.
The second half of the contest continued in much the same fashion as ASHS head coach, Sherri Harris, gradually called the team’s starters back to the bench to make room for the team’s reserves to gain some valuable experience. ASHS’ Abraylor Mercer, Tykiera Long, and Zari Mays each got in on the scoring action before the game concluded with a 64-28 ASHS win.
Gaulden led the charge for the Lady Panthers, earning a double double in the match by scoring 21 points and bringing down 12 rebounds. Swanson earned herself a double double as well, tossing 11 points on the board and grabbing 11 rebounds. Long was the other Lady Panther team member to score double digits, connecting on a pair of treys on her way to 10 points.
Gaulden led the team in assists as well, with six and four, respectively. Hicks contributed three steals and dished out three assists. Swanson assisted three shooters while Stevenson gained two steals.