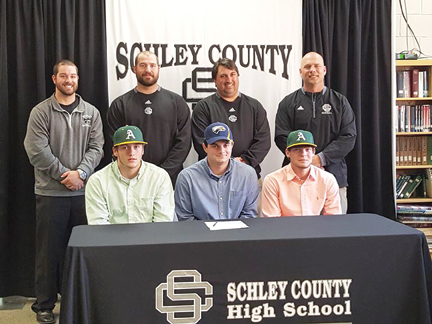 ELLAVILLE – Three members of the Schley County High School (SCHS) Wildcats 2015 state championship-winning baseball team took a big step last week, signing on with college programs to take their skills on the diamond to the next level after graduation.
Blake Howell and Brett Usry each signed on with Abraham Baldwin Agricultural College in a ceremony in Ellaville on Feb. 18 to join the college’s Golden Stallions baseball team following graduation. During the same ceremony, Michael Leeder signed a letter of intent to play for the Emory University Eagles during the 2016-17 season.
After the ceremony, the three athletes took a minute to speak with the Times-Recorder about their upcoming college careers.
Leeder, an avid sports fan, said that he developed a love for the game of baseball at an early age. “I’ve been playing baseball since I was old enough to play tee ball. I started playing serious travel ball when I was 12 or 13 years old and have been playing ever since,” he said.
Aside from his role in the team’s 2015 season in which the Wildcats swept the state tournament, earning the state title, Leeder has received many other accolades as well. Leeder was named to the All-Region first team after the 2014 and 2015 seasons. He received honorable mention in his freshman year.
Leeder serves the Wildcats as a pitcher and a first baseman.
On his decision to play for Emory, Leeder told the Times-Recorder, “They offer not only a great baseball program, but also a tremendous academic program. It’s an excellent school all around and that’s what I was looking for when I started looking at colleges.”  Leeder said that he plans on studying political science and economics at Emory and would like to attend law school after completing his undergraduate degree.
Asked what he is looking forward to in his upcoming college career, Leeder said, “I’m looking forward to being part of another program that cares about winning.”
Asked about the team’s reaction to winning the state championship at the conclusion of last season, Leeder said, “It was amazing, just having the community rally behind us as we got deeper and deeper into the playoffs… It was truly exciting looking out and seeing all of the people who supported us at that final game… It was pretty cool.”
In his free time, Leeder can often be found at the Georgia Southwestern State University (GSW) Storm Dome cheering on the basketball team. Leeder’s father, Michael Leeder, Sr. serves as GSW’s athletic director and head coach of the Hurricanes.
Howell is also a long-time baseball fan and player, having started playing when he was very young. “It’s a tradition in the family,” he said. All of my brothers play baseball…”
Howell made the decision to attend ABAC after attending a showcase at the college and meeting the coach. “He was a nice guy,” he said. “He gave me the offer to play baseball at the next level and I took it.”
As a member of the Wildcats, Howell was named first team All-Region as a pitcher. He also plays second base for the Wildcats.
Howell said that he would like to work towards becoming a math teacher and a coach during his time at ABAC. “I want to continue to have baseball in my life in some way,” he said. He said that he is looking forward to seeing how far he can go in his baseball career, stating that he is interested in coaching because he wants to eventually help impart his knowledge to a younger generation. “… Baseball isn’t just about the athletics,” he said. “You learn a lot out there.”
Asked about his reaction to the team’s state title win, Howell said, “It was exciting. It’s a dream that I had as a kid. It’s something that not a lot of people have a chance to do. It was fun to win it with the team. They’re like a family to me.”
In his interview, Usry, another long-time player, told the Times-Recorder, “I’ve been playing pretty much ever since I could hold a ball in my hand.”
Usry plays in the shortstop position for the Wildcats and takes up pitching duties as needed.
Usry made his decision to play for ABAC after being invited by the team’s coach to practice with the Golden Stallions. “I did pretty well. After that practice, he offered me the chance to come play with them after graduation,” he said. “I thought about it for a few weeks, and finally decided to accept the offer.”
Usry said that he will be focusing on core classes while at ABAC. After completing his educational foundation, he said that he is open to the idea of transferring to another school and pursuing a degree in computer science.
Usry was named Player of the Year in 2015 by the Georgia Dugout Club for his performance on the diamond during the Wildcats’ championship season. Asked if he was surprised by the recognition, Usry said, “I knew that it was between me and a buddy of mine. It was a nice award to get.”
On his accomplishments with the Wildcats, Usry said, “I’ve been named first team region 4A player of the year a few times as well as hitter of the year.”
Usry and Howell both said that they spends a lot of their free time out on the diamond, practicing.
“We’re usually out there for about two hours each afternoon with the team but, individually, we’ll spend another hour or so working on our game,” Howell said.

Lady ‘Canes blow past Bobcats in homecoming match at…