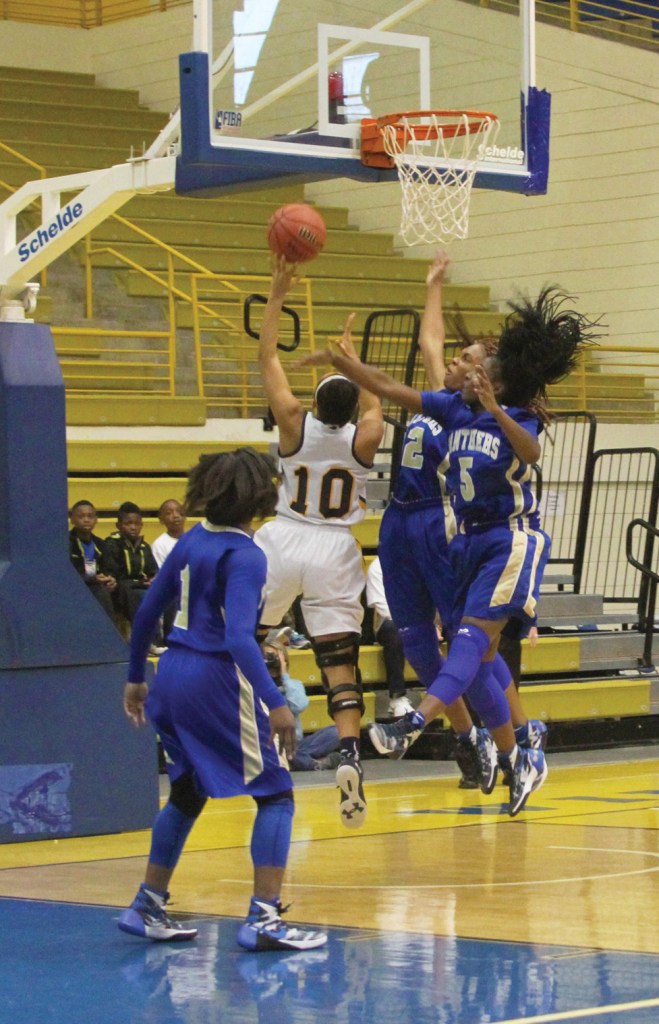 Michael Murray/Americus Times-Recorder: ASHS' Kayla Howard and Timia Swanson (5) leap up to block a Marist shooter during the Lady Panthers' state quarterfinal match in Fort Valley on Feb. 26. ASHS' Atyanna Gaulden (1) watches intently for the chance to grab a rebound.

Fort Valley – An aggressive, 29-point performance from Americus-Sumter High School’s (ASHS) Atyanna Gaulden helped push the Lady Panthers one step closer to a state title this afternoon (Feb. 26) in Fort Valley.
The number-one ranked Lady Panthers hit the court at Fort Valley State University for a heavyweight bout against the number-two ranked Marist Lady War Eagles, of Atlanta. After a long up-and-down battle, the Lady Panthers eventually earned a 63-56 win along with the right to advance to the semifinal round of the state playoffs.
ASHS gave up a slight edge to Marist girls early in the contest, but the Lady Panthers fought their way back into the lead halfway through the second frame and never looked back.
The Lady Panthers didn’t pull any punches in the match, putting all of their skill and determination to the test as they took on some of the most vicious opponents that they have faced, or are likely to face this season.
With the win, the ASHS girls punch their ticket to the semifinal round of the tourney, scheduled to begin on Feb. 27 at 6:30 p.m. at the Fort Valley State University HPE Gymnasium.
The team’s opponent is yet-to-be determined as of this writing. Please check back with us soon for updates on the Lady Panthers’ progress as they plow their way to the state championship.