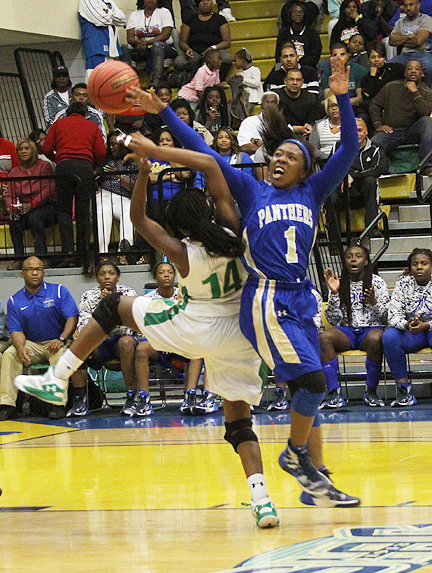 FORT VALLEY – The Americus-Sumter High School (ASHS) Lady Panthers turned in another exciting performance on Feb. 27 at Fort Valley State University’s HPE gymnasium, working towards a 51-44 defeat of the Buford Lady Wolves to snag a spot in the Georgia High School Association (GHSA) Class AAAA state playoffs, scheduled to take place on March 3 in Macon.
The win leaves the ASHS girls with an impressive 30-1 record to date on the 2015-16 season.
The Lady Panthers will be facing the Veterans High School Lady Warhawks of Kathleen, GA for the state title match.
The Lady Warhawks , who are currently 27-4, earned their spot in the championship round with a 28-24 victory over Wayne County.
ASHS’ Atyanna Gaulden led the charge for the Lady Panthers in the semifinals, repeatedly finding (and sometimes creating) a path to the bucket to contribute 20 points to the win. Timia Swanson and Jykiera Long each tacked on another 11 points to ASHS’ impressive victory, followed closely by Kayla Howard with eight.
In the low-scoring, but very intense, contest that had a full house of both ASHS and Buford supporters on the edges of their seats, the Lady Panthers pulled ahead early in the second quarter to grab a lead that the team’s powerful defense would carefully guard throughout the rest of the contest. Buford threatened the Lady Panthers’ lead several times, with the team’s ace shooters, Tory Ozment and Audrey Weiner paving the way for the Lady Wolves with 11 points apiece.
The Buford girls came within one point of retaking the lead late in the third frame, only to have their hopes of a comeback dashed by a penetrating drive to the bucket by Gaulden and a last-second three-pointer by ASHS long-range sniper, J. Long.
Taking a 38-32 lead into the final frame gave the Lady Panthers the cushion they needed to eventually snag the win, even though the Lady Wolves would again pull within one point halfway through the final stanza. The ASHS girls remained vigilant in their march to the championship, however, blasting off on a 6-0 run to leave their foes in the dust and cinch the victory.
Be sure to pick up a copy of the next edition of the Americus Times-Recorder for a full recap of the Lady Panthers’ action-packed victories over in the quarterfinal and semifinal rounds of the state playoffs as well as photos of each game.

From STAFF REPORTS AMERICUS – The Georgia Southwestern State University women’s basketball team wrapped up their 2015-16 season with a... read more