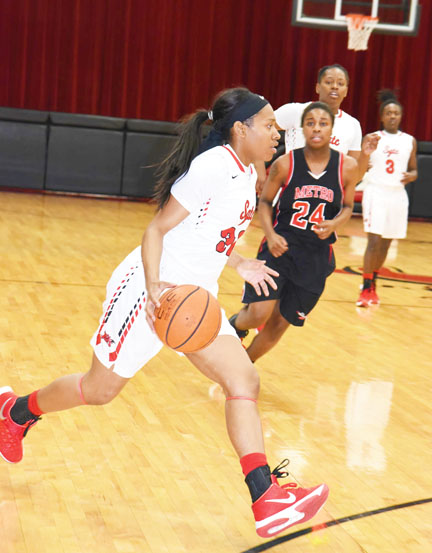 Submitted by SGTC: Cierra Bond had 21 points in the Lady Jets 100–62 win over Atlanta Metro in the semi-final round of playoffs.

AMERICUS – Former South Georgia Technical College (SGTC) Lady Jets head coach, Brandon Harrell, and the Georgia Highlands College Lady Chargers pulled off a 65–63 upset over the SGTC Lady Jets on Feb. 27 in the NJCAA Region XVII tournament finals in Americus. The Lady Jets had won the NJCAA Region XVII tournament for the previous two seasons and gone on to represent the conference at the national tournament in 2014 and 2015.
The Lady Jets earned their spot in the tournament finals with a 100–62 win over the fourth-seeded Atlanta Metro College Lady Trailblazers Feb. 26.
Georgia Highlands will now travel to Spartanburg, SC to play in the District J tournament. The winner of that game will advance to the NJCAA National Tournament at the Rip Griffin Center in Lubbock, Texas. The top 24 teams in the nation will be competing for the Division I title in the National Tournament.
There are four at-large berths to the national tournament in addition to four zone qualifiers and the 16-teams that win their regional tournaments. There is an outside chance that South Georgia Tech, as the 17th-ranked team in the nation, could receive an at-large bid to the tournament.
The Lady Chargers came into the NJCAA Region XVII tournament with a 14–2 Georgia Collegiate Athletic Association (GCAA) conference record, identical to that of the Lady Jets. The Lady Chargers were seeded second in the standings, however, because of the final season rankings among their opponents.
A recent press release from SGTC stated, “The Saturday game was everything that a championship game should have been and, at the final buzzer, two points was all that separated the winners from their opponents.”
The Georgia Highlands team was up 24–20 at the end of the first quarter, despite five lead changes and two ties in that 10-minute period.
The Lady Jets came back and pulled within one point of the Lady Chargers at the half to bring the score to 35–34.
Georgia Highlands came out in the third period and outscored the Lady Jets 20–16, but the Lady Jets cut that lead and tied the game in the fourth period. The Lady Jets had the opportunity to tie the game once more in the last 14 seconds on the clock but their efforts fell short, sentencing the SGTC team to the loss.
GCAA Player of the Year, Angela Tompkins, led the Lady Jets in scoring, earning herself a double double with 27 points and 10 rebounds. Tompkins also earned All-Tournament honors for her performance in the series.
Brittney Delva contributed 11 points and six assists in the match and was the only other SGTC player to be named to the All-Tournament team.
Cierra Bond tossed in 12 points and  pulled down five rebounds for SGTC in the contest.
Molly Brown added seven points. LeDeja James added four points and Mikaela Jones closed out the scoring with two points.
Georgia Highlands’ Kayla Carter led her team in scoring with 19 points, followed closely by Deashia Jones, who added another 10.
The previous evening, the Lady Jets had taken advantage of a second-half surge to earn their significant victory over Atlanta Metro.
The Lady Jets outscored Atlanta Metro 58–21 in the second half behind the strong play of Delva and 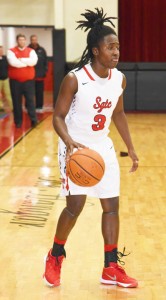 Submitted by SGTC:
Brittney Delva hit three of four from the three point line and scored 17 points to help lead the Lady Jets to the NJCAA Region XVII finals.

James.
Bond, was the top scorer for the Lady Jets with 21 points, 17 of which came in the first half to keep the Lady Jets ahead at the break.
Delva scored 17 points, dished out eight assists, four steals and pulled in four rebounds in the match. Twelve of her points came in the second half. James was also in double figures with 12 points, all of which came at crucial times in the second half.
Tompkins, had a big game as well, with 11 points and 13 rebounds while Jones closed out the double digit scoring with 10 points.