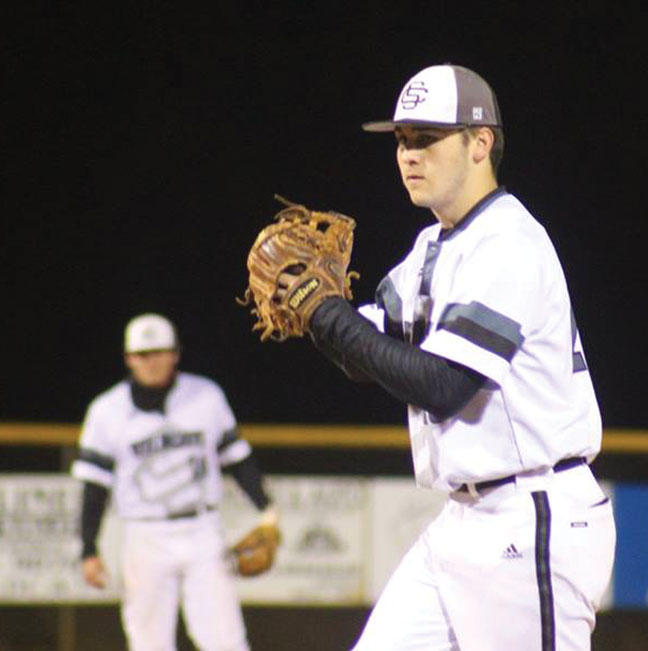 Submitted by Chuck Cheek: Wildcat pitcher, Chase Patrick, begins his wind-up during a Wildcats contest against MDS. Patrick struck out 13 batters in the match and led the ‘Cats to victory with a three-run homer.

Schley County baseball has kicked of the 2016 season with a bang, with the Wildcats quickly racking up a five-game winning streak since opening play on Feb. 18.
Following the team’s curtain-raising victory over Perry, the Wildcats have gone on to snag a win over Webster County as well as a pair of substantial wins over Mount de Sales (MDS) and another over Miller County to bring the team’s record to 5-0 so far on the season.
The Wildcats hosted MDS on Feb. 24, overcoming an early deficit in the third inning and pressing on for an 8-4 win.
Schley’s Chase Patrick paved the way for the Wildcats’ win in their third contest of the season, racking up 13 strikeouts over five innings on the mound. In addition to his contributions from the hill, Patrick set the pace for the team’s batters, knocking a three-run homer in the third frame and a two-RBI double in the fifth.
Trailing 1-0, Patrick’s third-inning blast homer gave the ‘Cats a 3-1 lead that MDS would go on to tie in the fifth.
Schley regained the advantage in bottom half of the frame as Brett Usry singled to left and stole second, later scoring on an RBI by Will Barry.
Schley added two more runs  in the bottom of the sixth as Jordan Hall drew a one-out walk and advanced to second on a Josh Hutchens single. Reid Ragsdale tripled to right field, plating Hall and nearly bringing in another run, but Hutchens was called out at the plate.  Leeder and Usry followed with walks, setting up Patrick’s two-RBI double to cinch the game.
In addition to Patrick’s impressive performance from the mound, Blake Howell pitched a perfect two innings, recording five strikeouts along the way.
In the game, the Cats struck out 18 of the 21 possible outs.
Patrick, Hutchens, and Usry paced the Cats at the plate with two hits each.
On the win, Wildcat head coach, Chuck Cheek told the Times-Recorder, “Chase was outstanding on the mound and Blake really slammed the door when he came in. We are blessed with our pitching right now. Those guys go out and dominate almost every time. We just have to score enough runs to give us a chance and play solid defense behind them.”
Two days later, the Wildcats traveled to Macon to face MDS once more, this time earning a 9-1 win over their hosts.
Usry and Leeder shared the mound this time around, combining for a no-hit performance as the Wildcats pulled ahead by three runs in the initial stanza and never looked back.
Usry pitched five innings in the contest, striking out eight batters and walking two. Leeder pitched the final two innings, striking out hive batters and not allowing a base runner.
The ‘Cats were led at the plate by Usry, who had two hits and three RBIs. Leeder, Patrick, and Barry also had key RBI hits in the contest.
After the match, Cheek stated, “Brett and Michael were outstanding on the mound. I think that’s the first no-no we’ve had here that was a seven-inning game against a good team. We’ve had some run-ruled games in the past in which we didn’t allow a hit, but we don’t really count those. Leeder had a big hit for us in the first inning to give us the lead early and our pitching took over from there.”
Riding this momentum into their next match-up against Miller County, the ‘Cats forged ahead for a 14-1 blowout over the visiting Pirates.
Howell proved to be a dominant force on the mound for the Wildcats in that match-up, striking out 12 batters in four innings.
The Wildcats recorded a single out on a sacrifice bunt and the rest of the Pirates’ batters went down on strikeouts, with one batter reaching on a passed ball.
According to Cheek, “In spite of the strong pitching, the ‘Cats trailed 1-0 going into the bottom of the fourth. Pirate starter, Cody Chapman, was impressive in his three innings of work.”
Schley got the scoring going the bottom of the fourth inning. Back-to-back singles by Clint Sellars and Patrick were followed by a walk to Howell.
After the Pirates changed pitchers, Barry hit a sacrifice fly to deep center field that was dropped, allowing the Wildcats to tie the game. Catcher, Jarrod Wall, then hit a grounder to the shortstop that was bobbled. By the end of the inning, the ‘Cats had built a 6-1 lead on a couple of ground outs, another sacrifice fly, and a pair of errors.
The Wildcats’ bats exploded in the bottom of the fifth inning, highlighted by a grand slam off of Sellars’ bat to end the game early with a final score of 14-1.
Patrick and Barry each had two hits to lead the Cats offensively at the plate.
On the Wildcats’ latest win, Cheek stated, “We didn’t play great, especially in the first couple of innings. Chapman is a good pitcher. He’s going to ABAC with Brett and Blake. We were taking better swings in the third inning and hit some balls hard… Our pitching is obviously our strength.  Blake did a great job of shutting them down and giving us time to come back.”
The Wildcats returned  to action on March 2, traveling to Columbus to take on the Hardaway High School Hawks. The results of this contest were not available at the time of this posting. The team will travel to Webster County on March 4 and to Heard County the following afternoon before returning to Ellaville on March 7 to open region play against Dooly County.