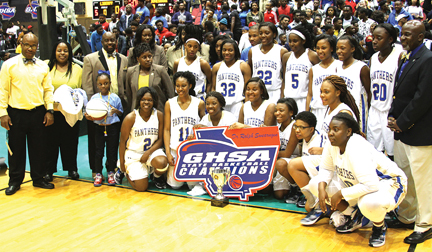 MACON – There was definitely Panther Pride in the air last night in at the Macon Coliseum!
Cheered on by an ocean of blue and white-clad supporters, the Americus-Sumter High School (ASHS) Lady Panthers’ battle for the state title finally came to fruition with the team’s 56-38 victory over the Veterans High School Lady War Eagles on March 3.
With 10 different players getting in on the scoring action and 15 total players contributing in the contest, the Lady Panthers were able to give nearly every person on the team’s roster valuable experience in the high-pressure state championship match.
The win marks the first time that the Lady Panthers’ basketball program has won a state championship since 1966, and the school’s first state title in any sport since the merger of the Americus City and Sumter County school systems in 2003.
With a 31-3 overall record on the season, the Lady Panthers wrapped up competition undefeated against Georgia teams, with the team’s only blemish on an otherwise spotless record coming from Elizabethtown High School, of Elizabethtown, KY on Dec. 29.
Led by impressive performances on the part of Atyanna Gaulden and Jykiera Long in the state title match, the Lady Panthers put all of their skills to the test to stifle a quick, determined Veterans offense, led by point guard, Kya Cochran, and the support of several long-range perimeter shooters.
Gaulden set the pace for the team, continuously driving the lane to toss in 16 points for the Lady Panther cause while Long joined her in double figures, draining a pair of three-pointers on her way to a 12-point contribution.
The Lady Panthers connected on 50 percent or better on all of their shots from the paint, the arc, and the charity stripe to cinch the victory.
Be sure to pick up a copy of the March 5 edition of the Americus Times-Recorder for a full recount and comprehensive statistics from the action-packed match-up as well as more photos of the contest and quotes from Lady Panther head coach, Sherri Harris.