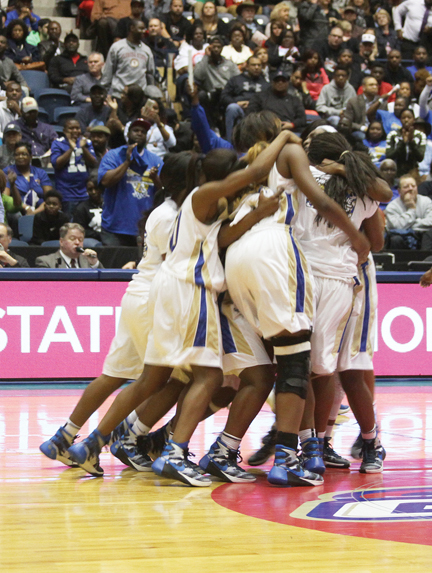 Michael Murray/Americus Times-Recorder: Members of the Lady Panthers hug in celebration at the final buzzer of the championship match.

MACON – At long last, the anticipation of a potential state championship win for the Americus-Sumter High School (ASHS) Lady Panthers has come to fruition, ending in a celebration that resounded across the city of Macon on March 3.
The ASHS girls hit the court in the Macon Coliseum on March 3 to battle the Veterans High School Lady Warhawks for the state crown, winning a 56-38 decision to assume their spot at the top of the pile in Georgia AAAA competition.
With the victory, the Lady Panthers, who have enjoyed a strong first-place ranking nearly all season, put a cap on their 2015-16 season with a 31-1 record.
The win marks the first time that the Lady Panthers’ basketball program has won a state championship since 1966, and the school’s first state title in any sport since the merger of the Americus City and Sumter County school systems in 2003.
The Lady Panthers’ achievement will be honored with a parade in downtown Americus on March 8 at 6:00 p.m., followed by a community celebration that will be held at the ASHS gymnasium.
To the cheers of an ocean of loyal blue-clad supporters, the Lady Panthers saw 10 different players get in on the scoring action in the championship game and 15 total players make contributions to the victory. As a result, ASHS women’s basketball head coach, Sherri Harris, was able to give nearly every person on the team’s roster valuable experience in the high-pressure state championship game.
Following the victory, Harris spoke with the Times-Recorder. Asked if she was relieved after the game’s conclusion, she stated, “It feels awesome. It’s not necessarily as if a burden has been lifted, because I know what type of players I have and we worked really hard to get ourselves in this position. It feels great to do this for our community. There are so many people here wearing blue in support of us. It just feels great. That’s what the girls were saying earlier. ‘Man, there’s so much blue out there.’ I said, ‘You’re right. They’re all out there to see you ladies take this trophy home,’ so they came out and gave it their all.”
ASHS guard, Amber Hicks, opened up the game’s scoring shortly after the tip-off, with a long perimeter shot from the corner before shooting guard, Jykiera Long, nabbed an expert steal and made a fast break for a lay-up to give ASHS an early lead. With Hicks soon tossing in another lay-up and Long honing in on the bucket from beyond the arc, the Lady Panthers quickly found themselves on the sweet end of a 10-0 score four minutes into the contest.
Veterans finally broke the scoring seal halfway through the initial frame when Carrington Kee converted a rebound and sparked the Lady Warhawks into action.
Long quickly assisted ASHS small forward, Timia Swanson, in a lay-up and, soon after, point guard and FSU commit, Atyanna Gaulden, jumped into the fray to assist guard, Jakala Stevenson, in a lay-up before driving the lane to toss in one of her own.
All the while, the Veterans girls, led by Kya Cochran and Audrey Nicholson, persistently attacked from the perimeter to scavenge points at every possible opening. By the end of the first period, the Lady Panthers had amassed a 16-9 advantage.
When play resumed, the Lady Panthers continued to ride the wave of excitement that permeated the Coliseum, as Gaulden led the charge with a reverse lay-up, a three-pointer, and a steal. Moments later, Long drained the second of her treys from the center, further padding the ASHS lead.
Around the two-minute mark, Swanson laid up another Stevenson-assisted shot from the paint before power forward, Kayla Howard, got in on the action with a pair of spot-on buckets from the charity stripe. Immediately following these shots, Shidajah Johnson attacked the rim to put up another two points before the end of the half. ASHS took a 32-17 lead into the locker room at half-time.
Returning from the break, Gaulden, Swanson, and Hicks continued to propel the team ahead with a series of steals and lay-ups before forward, Myia Crawford, tossed in her first basket of the match. Gaulden and Swanson continued their aggressive offensive press to help the Lady Panthers rack up a 44-22 lead when the final frame commenced.
Veterans had their most productive period of the match in the fourth, outscoring the Lady Panthers 16-12, but ASHS’ early lead proved insurmountable for the Lady Warhawks. ASHS’ A’braylor Mercer and Zari Mays contributed their first points of the match in the final frame as Gaulden, Long, and Stevenson assisted, ensuring that the Lady Warhawks would not see the opportunity to mount a comeback effort.
At the final buzzer, the Lady Panthers erupted into celebration along with the throngs of ASHS supporters that had packed the Coliseum. Upon receiving the state championship trophy, Harris and Gaulden addressed the crowd, thanking them for their continued support.
Gaulden set the pace for the Lady Panthers in the test, leading the team in points, assists, and steals with 16, four, and five, respectively. Long followed close behind with 12 points, half of which came from behind the three-point line. Long also contributed two steals and one assist to the victory.
Swanson led the team in the battle on the glass, bringing down seven rebounds. Swanson also contributed six points, dished out two assists, snagged four steals, and blocked one shooter.
Hicks added seven points to the Lady Panthers’ total while dishing out two assists and grabbing a pair of steals.
Howard brought down five rebounds in the test while Mays came down with three.
The Lady Warhawks were paced by Cochran, who tossed in 11 points for the team, brought down eight rebounds, dished out three assists, and nabbed four steals.
In total, the Lady Panthers connected on 53.5 percent of their attempts from the floor, 50 percent of their attempt from beyond the arc, and 58.3 percent of their attempts from the charity stripe. 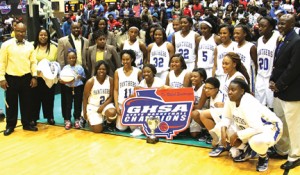 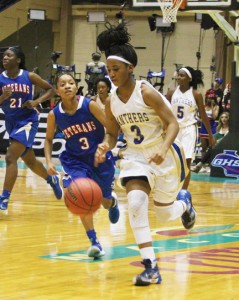 Michael Murray/Americus Times-Recorder:
ASHS’ Jykiera Long follows a steal with a fast break during the first half of the Lady Panthers’ state championship match in Macon on March 3. Long scored 12 points in the contest. 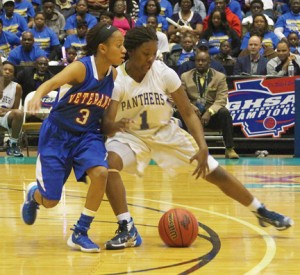 Michael Murray/Americus Times-Recorder:
ASHS’ Atyanna Gaulden drives past Veteran’s Kya Cochran as she makes a break for the bucket during the second half of the state championship game in Macon. Gaulden scored 16 points in the contest.