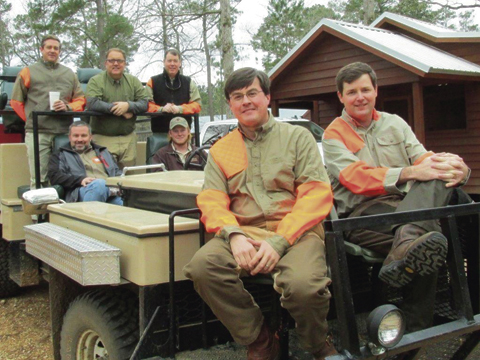 AMERICUS — On Friday, Feb. 12, 42 people gathered for hunting, fellowship and continuing the legacy of giving by John Gill. Gill was an avid supporter of Magnolia Manor and The League of the Good Samaritan. He was known for his servant heart and made an impact in many lives because of his benevolence. He  served Magnolia Manor as the vice chairman of the board of trustees and chairman of the finance committee and was instrumental in growing the ministry of Magnolia Manor.
The event was held at Southpoint at Showtime Plantation in Bronwood, owned and operated by Larron and Laura Copeland. Hunters gathered from across Georgia for a day of sportsmanship and enjoying a delicious southern cooked meal. The hunt was made possible in part by sponsors TIS Insurance, and Diversified Imaging Services. The day was a great success, with over $20,000 being raised for The League of The Good Samaritan, the charitable arm of the ministry of Magnolia Manor. The League exists because Magnolia Manor’s founders promised that, “no one, having chosen to come to Magnolia Manor, would ever have to leave due to an inability to pay for care.”
In regards to John Gill, Magnolia Manor President & CEO Mark Todd shared, “John Gill’s leadership to Magnolia Manor was instrumental in our past successes and we are honored to carry on his spirit of benevolence through this charity event. John would have been both humbled and grateful that others choose to honor his legacy through an event that gives to others in need. We continue to remember and be thankful for his leadership, his spirit of caring for others and his legacy of giving.”
Plans for the third annual John Gill Memorial Quail Hunt are underway for 2017. If you would like information about this event, contact Sheila Bivins, event coordinator. She can be contacted by emailing sbivins@magnoliamanor.com or by calling 229-938-5928.
For information regarding Southpoint at Showtime Plantation, visit their website at www.southpointatshowtimeplantation.com or contact them by calling 229-886-8038.