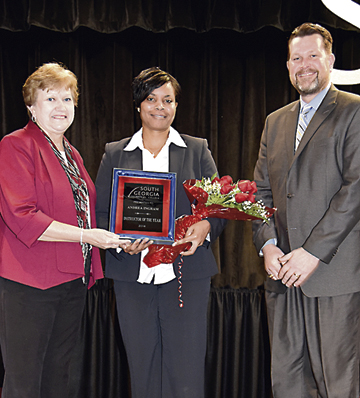 Andrea Ingram, center, was named SGTC Instructor of the Year for 2016. She is shown with then SGTC Acting President Janice Davis and then SGTC Vice President for Academic Affairs John Watford, Ed.D.

AMERICUS — South Georgia Technical College (SGTC) computer information systems instructor Andrea Ingram was selected as the SGTC 2016 Instructor of the Year and will represent the college in the state Rick Perkins Award competition in Atlanta this year. The announcement was made by SGTC Acting President Janice Davis at a special Rick Perkins Instructor of the Year Award breakfast.
As South Georgia Tech’s Instructor of the Year, Ingram will compete at the Southern Regional level competition at Moultrie Technical College’s Tifton campus for a chance to become a finalist in the Rick Perkins Instructor of the Year competition for the Technical College System of Georgia. She is competing against the top instructors from each of the state’s technical colleges and a Board of Regents college with a technical division for the Rick Perkins Award for Excellence in Technical Instructors.
Andrea Ingram has been the computer information systems instructor at SGTC since 1997. She earned her master of science degree in administration with a concentration in business management, master of science in computer science, and her bachelor of science degree in computer science and mathematics from Georgia Southwestern State University. She serves as co-director of Assessments for South Georgia Tech’s Quality Enhancement Plan (QEP).
“I always thought teaching was a two-way street, but over time, I’ve found that it’s a full circle,” said Ingram, after accepting her award. “It’s not just something that happens between an instructor and a student. It takes all of us here at SGTC to shape a student’s learning experience and help them reach their educational goals.”
Ingram was also presented with awards from both SB&T President Barry Blount and SGTC President Emeritus Sparky and Allene Reeves at the breakfast.
Also recognized at the breakfast were the additional Instructor of the Year finalists, which included Kevin Beaver, motorsports vehicle technology; Jennifer Childs, practical nursing; Paul Farr, general education; and Teresa McCook, criminal justice technology.
The selection committee for the Instructor of the Year included Dorothy Crimes, assistant principal of Webster County High School; Adam Hathaway, superintendent of Schley County School System; George Porter of the System Office of Marion County School System; the Rev. Hosie Waters, retired superintendent of Macon County School System; and Karen Werling, vice president of Student Affairs, Institutional Support, and Technology at South Georgia Tech.
SGTC Dean for Academic Affairs Vanessa Wall and Director of Career Services Cynthia Carter serve as the co-chairs for the Instructor of the Year program at SGTC and their committee includes past Rick Perkins Award/Instructor of the Year winners Brett Murray, Law Enforcement Academy instructor; and Raven Payne, general education instructor.